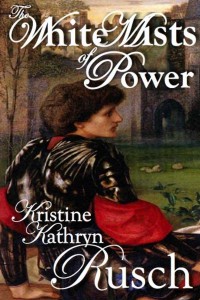 For the first time in nearly twenty years, you can purchase my first novel, The White Mists of Power.  Right now, it’s only available in e-editions, but by October, it’ll be available as trade paper as well. Don’t worry; I’ll let you know when that’s happening.

Watch this space for more of these announcements.  As I mentioned before, WMG Publishing is putting out my backlist, including many of the novels.  (Some have publishing rights tie-ups with their original publisher; I’m working to get those changed.)

As for The White Mists of Power, it’s a high fantasy novel with some surprises.  In fact, it’s so different within its traditional structure, that it’s tough to talk about without ruining the book for you.  (Don’t read everything from the reviewers on Amazon; a few have serious spoilers.)

If you like the Fey, you’ll like this.  I reread it as we prepped it for publication, and am pleased with how it’s held up. When it came out, Booklist called it “a thrilling read,” and Orson Scott Card called it “a grand adventure.”  I think it’s both, with a touch of romance and a lot of magic.

The electronic version is in the queue for iBookstore and Barnes & Noble, among other places. If you want copies for those places now, go to Smashwords. Otherwise, it’ll arrive at those locatons in a few weeks.  Right now, it’s available on these sites–and the Kindle site includes Amazon.uk (for those of you in the U.K.)