Yet Another Day of Travel…

Yet Another Day of Travel…

First, let me share with you the view from my Nuremberg hotel window: 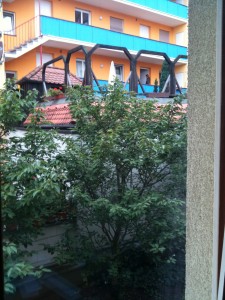 Isn’t that lovely?  I’m on the second floor (American third floor), with a view of the garden.  The multicolored building is an apartment complex.  This afternoon, someone inside there was practicing the cello–and it was utterly lovely. Brahms, I think.

Most of my other photos are great for writing research and lousy for sharing.  Pictures of building details, or ceilings, or interesting people. If I want pretty photos of places, I buy postcards.

I promised more on Leipzig from yesterday, but seriously, I was so jet-lagged that my impressions don’t count for much.  Leipzig on Thursday.  I promise.  I’ll be awake then.  I’m awake now.  (Finally.)

Took the train to Nuremberg. Had a lovely conversation with a socio-anthropologist who was my seatmate.  She spoke excellent English.  Her specialty was Indonesia. She works at the university in Berlin, and was coming down here to conduct some poor PhD student’s oral exams.  She had the thesis spread in front of her, a big thick thing that I couldn’t read, unfortunately, since it sounded interesting.

When I travel, I love to talk to people, to learn about their lives, their thoughts, their country.  I have had a lot of great conversations so far on this trip.  The only place this didn’t work was Rome because the locals there hated tourists so much (and after seeing the kind of tourists Rome got, I don’t blame them).  So far, Germans have been friendly and quite interested in conversing with me as well.

I also took 3-4K of notes on the trip (again, writerly impression), and have more to write this evening.  None of which makes much sense outside of my story-generating machine brain. But that’s how I work.

The train arrived at 2:30.  By 3, I was wandering the Old Town part of Nuremberg.  It’s lovely here–filled with tourists, but interesting ones, and the locals like to talk.  I finally had some luck with the menus.  I went to a restaurant for lunch that has an English menu and the same items in the same order as the German one.  I read through both while eating, and got familiar enough with the kinds of things that I want to eat that I should be fine while eating alone.

Mostly walked around and gathered impressions tonight.  Did not expect the angle of the hills.  Did not expect hills at all.  Quite steep, and cobblestone. You can bet that’ll be in a story.

I have all of my touristy stuff to do tomorrow and a bit on Wednesday.  I should have a more touristy report tomorrow, I hope. Today was mostly internal stuff.  Oh–and a dessert I haven’t had since I was a child.  A powdered sugar-covered pancake, topped with raisins and what I call real applesauce (more apples than sauce)–just like my grandmother used to make.  I thought she had made that up.  Turns out, no.  Quite fun for me.  (Thank heavens for the hills or else I’d gain 200 lbs while I’m here.)

5 responses to “Yet Another Day of Travel…”