In Which I Depend Upon The Kindness of Strangers

In Which I Depend Upon The Kindness of Strangers

Me & Blanche Dubois.  Okay. We’re not quite the same.

What a strange and fascinating day.  I’m researching the Nuremberg trials for a long piece I’ve promised to an editor friend of mine.  The story takes place at the Trials. I already wrote a piece of it, but didn’t like what I had done because I had no real sense of the setting (to me) in the story.

It’s some distance from my hotel–too far to walk.  I could take the underground, but then I’d miss the surrounding neighborhood. And the bus tour took me past historical markers I didn’t want to see.

So I walked to the taxi stand near my hotel, and asked the first driver if he spoke English.  He did (a little, he said in German–no, I will not try to spell that).  I explained what I wanted, then I asked him to tell me about Nuremberg from his point of view as he drove.  Fascinating.  Lifelong resident here.  He was happy I was going to the Palace of Justice because “English Speaking Tourists usually go to the former Nazi Parade Grounds and sieg heil! (Nazi salute).”  He explained the area, and was generally fascinating–more for my story than for here.

When we got to the Palace of Justice, I paid him and added a lot extra for “the tour.”  He hopped out of the cab, walked up to the guards at the courthouse and told them to help me get home.  He showed me where the Underground was and how to use that if I wanted, and then made sure (again) that the guards would help.  Then he waved and drove off.

I went inside, was told I could see Courtroom 600 at 3 p.m. The courtroom is in use–as a courtroom–and had a trial this afternoon.  So I asked I could just wander (it being 11 a.m) and look around.  I could and I did.  I discovered a lovely hidden garden just in the courtyard of the courthouse.  And here’s where I’ll depend on you guys. This plant is everywhere in Nuremberg (and all over that garden).  Anyone know what it is? 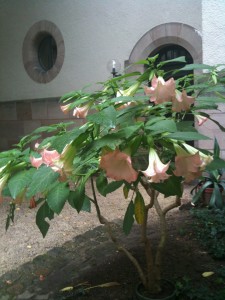 I wandered around a bit and learned many things I couldn’t get from books.  Like how that courthouse echoes.  The lovely little garden that’s been there from the beginning.  How utterly huge the entire building is.

I spoke to a minister from Kentucky who was there to see the courtroom. I saw some German tourists scream at the poor guy at the desk when he wouldn’t let them into the room (“But we are making a documentary! We only have today!”).  I watched some poor sap consult with his attorney and get bad news.

Then I saw an open door.  Into Courtroom 600.  A young man was fixing the sound system, preparing it for the trial.  I peered in, expecting to do no more, but he said, “You want to see?” and let me in.  I looked around for a good ten minutes–and was stunned at how small that room is. When events of historic magnitude happen somewhere, I always expect the place to be bigger. But it’s not that wide. The defendants would have been close enough to touch.  Amazing stuff, amazing design, and another very nice man.

I left quickly–not wanting to get him in trouble–and went around to the main doors of the courtroom to photograph them.  A kindly German-speaking guard asked me if I was part of the trial.  I said no. Then he asked “Tourist?” I nodded.  And he let me in for five minutes.  This time, the lights were on.  I took more pictures. Then the defendent arrived and another guard said to me in heavily accented English, “Your time is up” and ushered me out the door.  I got to thank the German-speaking guard, though, who was so very thoughtful.

I stayed another half hour, looking at more areas, studying detail.  I took pictures and video of strange things, like floor tiles.

Then I decided to walk to the Underground.  As I came in, I asked an older man smoking a cigarette if this was the way to the 1 train.  He said yes, then held up a finger and babbled at me in German (actually, he was probably very clear.  Just not to me.)  I told him my German was not good, and that I couldn’t understand.  He spoke again, slower, told me that I was in the right place.  Then I pulled out 5 Euros and asked where I could get change.  He repeated the rapid German that I did not understand, then mimed putting my money away.  (I figured he thought I shouldn’t wave money around.) He indicated that I should follow him into the Underground proper.  Stupid me, I thought he was showing me where the ticket machine was.  (I should say that there were a lot of people around and in no way would I have followed him somewhere alone.  He led me to an area with more people.)

Instead of taking me to the machine, he walked through the turnstile and indicated I should come–buying my ticket himself with his own card!  He then got me on the train (which he also took), and made sure I got off on the right stop. (He kept going.)

I’ve had a lot of help on this trip, but mostly from people in service professions who are paid to be nice to tourists–hotel employees, waiters, people at the various airports/train stations.  But this was different. These folks went out of their way to help me get the information I needed, or in the case of that nice man at the Underground, just to help a befuddled American get to another part of the city.

Really pleasant.  What a nice day I’m having.