Neither Here Nor There

Neither Here Nor There

I did walk through it, though, when even the locals had given up.  Many of the outdoor fruit and merchant stands closed.  Their mistake.  It’s sunny now.  Of course I’m inside at the moment.

I’ve returned to the hotel to work for two hours while waiting for the taxi to take me to the train.  I’ll be back in Leipzig later tonight to start Phase Three of my journey.  If Phase One was the Never-ending Plane Ride, and Phase Two was researching the trials, then I really have already begun Phase Three. I’m doing research into old musical instruments (pianos, mostly) for an undefined project.

I get undefined projects a lot.  My subconscious tells me Learn this! We’re going to write about it. I’ve learned to trust that feeling. For example, I was in college when I started buying books on 1968, for an undefined project.  It took sixteen years from the first book purchase for that project to announce itself.  That project was the Kris Nelscott/Smokey Dalton books.

Anyway, before I tell you about the musical instruments, let me do something I rarely do.  Let me say that this hotel, the Hotel Agneshof Nürnburg, (a three star) is utterly marvelous.  I loved my stay here.  The staff was good, the room was comfortable, the hotel’s in a good location, the breakfast was spectacular.  I’ve stayed in some fine hotels in Europe, and then I’ve stayed in three memorable (in a good way) ones. This is the best so far–not just on this trip–but in all of my European trips.  So, if you’re coming to Nuremberg or if you live near here and want to recommend a hotel, recommend this one. By the way, the write-up (which I linked to) is accurate (a rare thing in hotel brochures in my experience).

I set aside this morning and early afternoon to finish my research if I needed to. Since I didn’t need to, I planned to shop, but wasn’t in the mood. So I wandered down to the German National Museum.  I didn’t really want to look at museum displays, but I figured I’d see if something intrigued me.  Then I looked through the brochure and realized they had an ancient instrument collection.

Now Leipzig has one as well.  I plan to spend tomorrow and maybe part of Friday immersing myself in Bach. But the instrument collection here was an unexpected treat.  The display of all the instruments was fascinating, but the thing that really attracted me were the keyboards.  I didn’t count, and I just stopped to look through the brochure to see if it listed the number (it doesn’t).  Let me say there were dozens of keyboard instruments from the 1600s to the mid-20th century, from harpsichords to fortepianos to organs to grand pianos that are–by modern standards–tiny.  There are also other keyboard instruments that I had never seen before, and I’m not sure of the name because the English translations in the museum were, at times, (um) wrong.

I must share this lovely bizarre thing, though.  According to my brochure, this is “Figure of a Lady with a Clavichord, ca. 1780.”  That makes it seem small and cute.  It’s not.  It’s taller than I am.  Here she is. 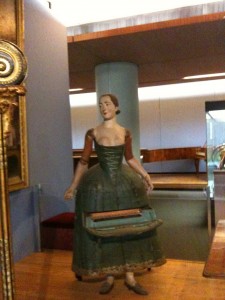 You can’t see it from here, but that clavichord is attached at the upper thigh.  Looks painful to me.

After I finished in the museum–and really, I didn’t tackle much of it (my brain is full)–I went to a little restaurant near the Sebald Church.  That’s where the tour buses meet their flock, which I had forgotten.  So the restaurant was full of really obnoxious tourists, whom I had pegged as Americans. But I talked to two of them, and turns out they were Australians.  One woman happily told me to go to the Passion Play.  She said that I didn’t need to read the program to understand the story.  I smiled and said that made sense, since Passion Plays were designed for people who couldn’t read at all.  She said, “Really? How nice of them to do that for us.”  She thought I meant couldn’t read German.  I was talking about the reason Passion Plays came about. <sigh>

This is travel I don’t understand.  Get off your bus, run around for two hours, get back on your bus and leave.  You see things, but I’m not sure you even understand them.

You also miss lovely moments like this one right now.  A group of musicians have just come into the hotel with their instruments.  They’re performing tonight and tomorrow at the music festival which is winding down. Musicians have come in and out of the hotel while I’ve been here, and they’ve had utterly fascinating conversations during breakfast.  I learned quite a bit–accidentally–about international music festivals. I suspect I’ll be as oblivious to other guests in the hotel when I return to Leipzig. Tomorrow Greg and Astrid Bear arrive, and the convention starts in earnest on Friday.  So we’ll be have science fictional conversations.

I’m about to do one of my favorite things in the whole world–ride a train in Europe.  You Europeans have no idea how lucky you are to have such a marvelous rail system.  I wish we had it in the States. Only the Eastern Corridor has rail at all, and that’ll do in a pinch, but it’s nothing like this. Amtrak could learn a thing or two about comfort from European trains.  Anyway–I’m heading back for Phases Three and Four (four being the convention). Five, of course, is the long long long plane ride home.

So I am about to leave from here to go to there.  Auf Wiedersehen until tomorrow!

One response to “Neither Here Nor There”