After the convention ended, the con committee wanted to take the Bears and I to the Monument. I wasn’t that thrilled at the first mention. Monuments—when you travel, you see a bunch of them.  They’re…monuments.

But when Thomas Braatz told me about this monument early in the week, he had trouble with the word.  (He practices his English, he says, once every two years [which makes it damn impressive, imho].)  He said he wanted to show us the Mountain.

So I said tentatively, “Mountain?”

And he said, “That is not the word? Monument.  The Monument.”

But, it turns out, he was right the first time.  That Monument is a mountain. 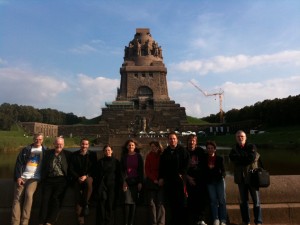 This is our group quite a distance away from the Monument

No photo does this thing justice.  According to the Leipzig book I bought while there, the Monument is the tallest monument in Germany.  The Monument is 91 meters high.  It’s unbelievably impressive.

It was built to commemorate Napoleon’s defeat in Leipzig in 1813. The citizens of Leipzig started building the Monument in 1897 and finished it in 1913.  It’s huge. No.  It’s bigger than huge.  It’s breathtakingly big.

We went inside and took the elevator to the center (the elevator is post-Wall).  In the center, a choir was setting up for a concert.  We looked around, then climbed to the middle outdoor section.

I do not do well with heights, so the wall and I spent a lot of time hugging.  The protective wall, the one that prevents you from tripping and falling to your death, only came up to my waist.  Since I’m a klutz with a grand imagination, I could picture myself tripping and tumbling over the edge.  It didn’t help that the locals kept talking about how many suicides chose this spot to end their lives every year.

I almost didn’t go to the top, but Dirk Berger reassured me that the protective wall up there was “very high.”  It was.  And it was thick too.

I’m glad I went.  You could see Leipzig sprawled all over the countryside.  Plus it was a gorgeous day, and the light was spectacular. 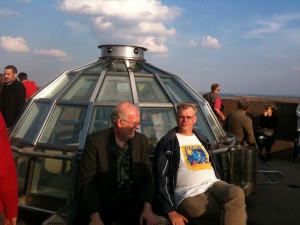 Greg Bear and Thomas Braatz at the top of the Monument

Still, I went down a bit earlier than everyone else—only to discover that the choir was ready to start singing.

Now usually in these circumstances, you get some crappy local choir that can’t sing in tune.  I doubt Leipzig, music center that it is, has a crappy local choir.  I never did learn the name of this group, but man, were they impressive. And the director knew how to use the marvelous accoustics to make the sound even better.

I could have stayed there all night, but the con committee had one more treat in store for us:

Everyone who heard I was going to Leipzig told me to have one meal there.  And while the meal was good, it wasn’t nearly as much fun as the restaurant itself.

The restaurant dates from 1530.  It provided the setting for the meeting between Faust and Mephistopheles in Goethe’s play Faust.  Goethe apparently frequented the tavern quite a bit.

The convention committee and friends took the guests to the restaurant and paid for a special tour of the historic rooms.  The tour was in German, and I only caught parts of it (more because kind folks translated), but what fascinated me the most were the recitations of Faust in the original German.  I hadn’t realized the power of the language, nor had I known about the meter and the rhyme.  It was, as one of the concom said to me, like hearing Shakespeare in the original English.  It’s one thing to know the story, another to hear the language of the story.

The evening was a great deal of fun, and the historic rooms worth the tour.  We ate in the restaurant’s great hall, which was stately and easily swallowed our party of 20+  Apparently the group closed down the restaurant; I left around 10 when I realized my contribution to the conversation was, “I’m tired.  Are you tired?”  I went back to the room and packed for the eventful flight home.

I was sorry to say good-bye to everyone, and sorry to leave my amazingly large hotel room (with its three beds and kitchen).  But I was happy to be heading home to see Dean and to get back to my routine.  All in all a great trip, which will have a good impact on my writing for some time to come.

4 responses to “The Mountain/Monument–and Auerbachs Keller”