Electronic versions of my backlist novels are starting to hit the various electronic bookstores.  Two weeks ago, I pointed you to Alien Influences.  Last year, I mentioned The White Mists of Power.  This week, check out Heart Readers.  It’s on Kindle, Smashwords and Barnes & Noble.com. It should be in other e-bookstores Any Minute Now.  A trade paperback format will be available later in the spring, and I’ll make the announcement here.  But for now, if you have an e-book reader and can’t wait, here’s Heart Readers. 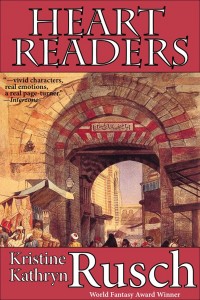 Twin princes—the curse of King Pardu’s line. Pardu killed his own twin to secure the throne. Now Pardu, dying, wants to use old magic to determine which of his sons will rule—without murder.

The old magic calls for heart readers to determine which twin has the pure heart. But the heart readers must work in teams—female teams. And the team chosen by the palace has a history, a violent history, a history that makes these two women unsuitable to chose the next heir.

“Compelling…(Rusch) pushes the narrative along at a galloping pace. A fine example in novel form of the old Hollywood adage: ‘A good script needs three things…story, story, story.’”
— The Dark Side (England)

“Like early Ray Bradbury, Rusch has the ability to switch on a universal dark.”
—the Times of London