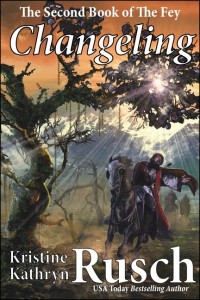 WMG Publishing has released the e-book edition of the second book of the Fey, Changeling.  The wonderful cover by Dirk Berger really helps to make these books pop.  You can order this on Kindle, Smashwords, Barnes & Noble, and in other e-bookstores.  There is also an audio edition from Audible. com. The trade paper version will appear later in the summer.  Enjoy!

A description and link to an excerpt follows:

BETRAYAL. ASSASSINATION. A STOLEN BABY. AND THAT’S JUST THE BEGINNING…

The most surprising book of The Fey saga, with a twist so powerful the rest of the series hinges on that one moment, The Changeling alters everything from the balance of power to the very nature of power itself.

For years, an uneasy truce has settled over Blue Isle. But in a series of betrayals, that truce gets shattered. First with an assassination. And then with the destruction of all hope that the warrior Fey and the people of Blue Isle will ever experience peace.