Here’s the cover for Blowback, the next Retrieval Artist novel. The book will appear in September as an audio-only book, and then in early December in both trade and ebook editions. As soon as the preorders are set up, I’ll notify you here. 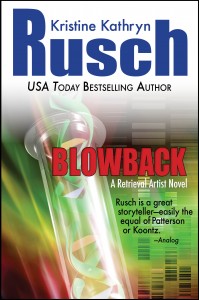 And here’s the back cover copy:

Set in the not too distant future, the latest entry in Rusch’s popular sf thriller series combines fast-paced action, beautifully conflicted protagonists, and a distinctly “sf noir” feel to tell a complex and far-reaching mystery.

The Moon, shaken by the Anniversary Day tragedies, deals with devastation. The Earth Alliance believes another attack imminent, but no one knows where or when it will strike. Just like no one knows who ordered the attacks in the first place.

The Moon’s chief security office, Noelle DeRicci, does her best to hold the United Domes government together. But Retrieval Artist Miles Flint, dissatisfied with the investigation into the Anniversary Day events, begins an investigation of his own. He builds a coalition of shady operatives, off-the-books detectives, and his own daughter, Talia, in a race against time. A race, he quickly learns, that implicates organizations he trusts—and people he loves.

“Rusch does a superb job of  making the Retrieval Artist books work as fully satisfying standalone mysteries and as installments in a gripping saga full of love, loss, grief, hope, adventure, and discovery.  It is also some of the best science fiction ever written.”