I generally post my recommended reading list a month or three after I’ve done the reading. Which means that all of the holiday stories that I read get recommended in January or February. Last year, I decided to do a compilation of past holiday recommends so that you can get them for the appropriate season, and it worked so well that I’m doing it again this year. 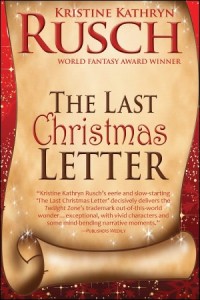 I’m also going to mention, by way of shameless self promotion, that I have a bunch of holiday stories available in print and ebook form. You can find a list here on WMG Publishing’s website.

Here are the holiday stories listed in past years. What you’re reading below is the exact text of what I published about these books and stories in the original recommended reading list. I began doing the list in 2008.

Cach, Lisa, “A Midnight Clear,” Mistletoe’d, Kindle Edition, 2011. A lovely holiday novella, set in New York at the end of the 19th century. The period details are fun—I had no idea that was when the Christmas card habit started—and the characters are great.  Catherine has spent years being wined and dined by her rich aunt, going to London, Paris, and on what was once called the Grand Tour. Catherine  has met European royalty and American royalty. She wears fine clothes, and she has an eye for beauty. Sort of. Because Catherine is terribly near-sighted and too vain to wear glasses.

She comes home for Christmas, to her family’s not insubstantial house in a relatively small town, and one of her wealthy suitors follows her. But she also meets a man whom she has no idea is wealthy—William, the owner of the general store. She’s not attracted to him at first because she can’t see him, literally. Then someone (William?) buys her a pair of spectacles and has them anonymously delivered, and suddenly she can see everything much clearer.

A great deal more happens here, including a magical wish by an innocent young girl (is that where the spectacles come from?), and some proper comeuppance for a very bad person. The story is lovely, the details good, and all of it will put you in a wonderful holiday mood. Enjoy!

Cach, Lisa, “Puddings, Pastries, and Thou,” Wish List, Leisure, 2003 (also in Mistletoe’d).  I have no idea where I got this anthology, which also features Lisa Kleypas, Claudia Dain, and Lynsay Sands, but I read it for two reasons: First, I’m still puttering through my Kleypas binge, and second, I always read a Christmas romance anthology over the holidays.

I have to say, though, that I really hated the design of this book.  It doesn’t do what romance anthologies (heck, all anthologies) should, which is point you to the authors’ other work.  In fact, the stories themselves have no byline.  You have to look at the table of contents to see who wrote what.

The Cach story was a nice surprise.  I’ve probably read two dozen such anthologies over the years and the stories are often sweet but predictable.  This one wasn’t predictable.  I’ve discovered Mary Balogh through such an anthology, and now I’ll seek out other work by Cach.

This is a witty story of a down-and-out woman whose immediate family was dead and who depends on the kindness of her distant relations.  Only they stuck her with an elderly woman who had either dementia or Alzeheimers (of course, the story doesn’t say since it’s set in Regency England).  She was the 24/7 caretaker, and she barely had time for herself. She also barely got enough to eat.

When the story begins, our heroine Vivian has just moved in with another set of distant relatives, and must contend with a jealous 17-year-old who is about to debut. I’m all set for a Mean Girls story—the 17-year-old doesn’t want to share her glory days with a lesser cousin—but the story doesn’t work that way.

The 17-year-old does set Vivian up with a seemingly undesirably hero, who is a bad influence not because he’s a rake or an alcoholic, but because…well, let me simply say that it has to do with morals that no longer exist.  He had done something honorable in our world, but dishonorable in theirs.

The entire story centers around the feasts over the holiday, and Cach delineates them with loving care.  It’s pretty clear that Vivian will go from being a bony distant relation to a fat lord’s wife, and we’re cheering for her the whole way.

And the story made me hungry for pastries. Enough said.

Hockensmith, Steve, “Fruitcake,” Naughty: Nine Tales of Christmas Crime, Kindle edition, 2010.  I love Steve Hockensmith’s short stories, partly because they’re so memorable.  I couldn’t get fruitcake out of my mind for days—much as I wanted to.  I’m not fond of fruitcake.  Many others aren’t either which is the impetus for this story of regifting and murder.

Hockensmith, Steve, Naughty: Nine Tales of Christmas Crime, Kindle edition, 2010.  I have no idea how many of Steve Hockensmith’s short stories I’ve read in Alfred Hitchcock’s Mystery Magazine or in Ellery Queen Mystery Magazine over the  years.  Quite a few, judging by the ones I remembered and reread in this collection.  It’s a collection of Steve’s Christmas stories, all of which I liked, many of which I loved.  Even the copyright page is funny.  My only quibble with the volume?  In it, Steve mentions he’s too busy to write short fiction these days.  So I say, Stop sleeping, Steve!  Write your books, but write short stories too.  Whatever it takes.  Maybe it takes y’all to buy this book to get him to write more short stories.  So do it.

Klavan, Andrew, “The Advent Reunion,”Ellery Queen Mystery Magazine, January, 2011.  A Christmas ghost story that packs a heck of a punch. Very short, very powerful.  If I say any more, I’ll ruin it.

Kleypas, Lisa, Christmas Eve at Friday Harbor, St. Martin’s Paperback, 2011. I saved this one for my holiday reading. In fact, I bought it in October when it first came out—and honestly, I could’ve read it then, despite the title. Because this isn’t a Christmas story; it’s a fall holidays story. Halloween makes a major appearance and Thanksgiving is hilarious, even though the book itself isn’t funny, but heartwarming.

Holly’s mother died in April, leaving Holly’s uncle Mark as her guardian. Mark has never been around children, doesn’t know what to do, but he enlists his brother Sam, and together they try to make a home for this poor little girl who has given up speaking since her mother’s sudden death. Six months later—in September—Holly writes a letter to Santa: she wants a mom for Christmas. Not that Mark wants to marry or anything. You get the rest of the plot, of course.

But the book is set on the San Juan Islands in Washington State, and it’s clear that Kleypas lives in the Northwest because the details are great. The characters are even better, from Holly to Mark to Maggie, the young widow who has just started a toy store.  Realistic, sensitive, and touching. You can read this one at any season of the year (but fall would be best).

Kroupa, Susan, “Walter’s Christmas-Night Musik,” Laurel Fork Press, Kindle Edition, 2010.  A wonderful story about Christmas Night visitors.  Unlike the previous Christmas night visitor stories you’ve read, these visitors are a surprise.  I’d like to be visited by these folks.  I found myself thinking about this story long after I finished reading it.

Reed, Annie, “The Case of the Missing Elf,” Thunder Valley Press, Kindle Edition, 2010.  One of the nice things about the revolution in e-publishing is that you can buy a single short story of an author’s work just as a sample.  I already knew that I liked Annie Reed’s stories, but I also know she’s not a household name.  I hope that changes.

This is one of her Dee and Diz fantasy detective stories.  Diz is an elf, although not a traditional one, and Dee is a woman with an added gift.  There’s a bit of romantic tension involved, but that’s not at the heart of this story.  Like so many stories on this month’s list, this is a Christmas tale.  And the missing elf is not the Jolly O

ld One, but his occasional impersonator, Norman.  Fun, and thought-provoking, in a Christmasy kinda way.  It’s only 99 cents—a nice introduction to Annie’s work.

Reed, Annie, “Essy and The Christmas Kitten,” Kindle edition, Thunder Valley Press, 2011.  This story is not as sweet as the title implies. Instead, it is a bit dark and moody, so much so that I read with one eye half closed, worried that something would go wrong. But it is a Christmas story in the best way, and quite memorable.  One of my best Christmas reads this year.

Reed, Annie, “Roger’s Christmas Wish,” Kindle Edition, Thunder Valley Press, 2010. Somehow I missed this in last year’s Christmas reading. Young Roger’s grandmother moved in with him, taking his room. His parents are unhappy, and so is Roger. All he wants for Santa to do is make his gra

ndmother leave. The story is sweet, with unexpected twists. It’s also a nicely done e-book. I read it in the Kindle app on my iPad and it felt like I was reading a real book. Nicely done.

Smith, Dean Wesley, “Jukebox Gifts,” WMG Publishing, Kindle edition, 2010.  I love Dean’s jukebox stories.  The conceit is this: for the duration of a single song, played on a jukebox, the person who chose the story can time travel to their strongest memory of that song—and maybe change the past.  “Jukebox Gifts” is set at Christmas and is both heartwarming and heartwrenching.

Willis, Connie, “All About Emily,” Asimov’s, December, 2011.  For years, Connie Willis’s holiday stories, published in Asimov’s,  were part of my Christmas traditions. Then, she got deeply involved in her excellent novels, All Clear  and Blackout (which I recommended earlier), and she stopped writing any short fiction at all. Which is, I think, a crime. I love Connie’s novels, but I adore her short work.

“All About Emily” riffs on the movie All About Eve, and explains the film for those of you who missed that marvelous classic. The story is set in New York at Christmas, and our heroine is the aging actress who might be threatened by a new up-and-comer, Emily. And yet, something about that girl….

It’s a fun story, especially if you love old movies, Broadway, theater, and New York at Christmas time. And it manages to be good science fiction as well. It’s nice to have you back, Connie. Please continue writing short fiction while doing your novels.