Read a fun middle-grade novel this month, and realized that while I had loved, loved, loved the first book in the series, the second disappointed—not because it was worse than the first. It might have been better. It disappointed because half the fun of the first (from an adult perspective) was the riff the novel was doing on a series of classic novels, and now the riff was not new to me. I’ll keep reading these books, but I might not recommend for that reason.

Also did a lot of Fiction River reading this month. All of it wonderful. I write this in May, and in June, a few days after I post this, Fiction River: How To Save The World will appear, so you can see what I was reading and liking in March. We also have some great new editors and topics planned for year 2 (I know, I know, you haven’t seen anything but the first book in year one), so we’re really excited.

As for the non-FR reading, I had a blast this month. In addition to the middle-grade, which I’m not recommending, I read a lot of magazines, short stories (most not recommended just because they didn’t seem memorable), novels, and nonfiction. Here’s the best of the best: 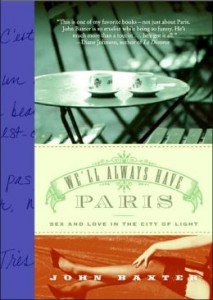 Baxter, John, We Will Always Have Paris: Sex and Love in the City of Light, Harper Perennial, 2006. I wasn’t sure I’d like this book because the history of the sex business in all its forms in Paris doesn’t intrigue me. But I had enjoyed the other Baxter books that I had read, and I decided to give this a try. I’m glad I did.

We Will Always Have Paris is a really sweet nonfiction book about all aspects of sex and love. Threaded throughout is Baxter’s romance with his wife. Like any good romance novel, the book ends with ceremonies. And unlike most romance novels, the pregnancy becomes an important plot point. 🙂

Baxter was fifty when he moved to Paris from Los Angeles. He had quite a career as a film journalist, one he couldn’t replicate in Paris, so he started writing books. Generally, he did analysis or biographies, but he’s also written several of these whimsical nonfiction books that more memoir than anything else. I mentioned the Christmas book earlier this year. I have two others that I’ll read eventually.

This book is charming. It’s less about Paris’s sex trade than Baxter learning about his city through the eyes of an outsider. He also explores the history of the “romance of the city” which is fascinating, as are the various cultural differences.

Nothing like the cover suggests, this book is warm and fun and fascinating. If you like reading unusual memoirs, you’ll like We Will Always Have Paris very much.

Cabot, Tyler, “Whatever Happened To Stem Cells?” Esquire, April 2013. An enlightening and intriguing article on what happens when politics meets science. Particularly interesting to me is the way that all sides of the political debate use the same scientist—who is apolitical—to prove their points. Read this, think about how many friends or family members you’ve lost to disease since 1998, and imagine a different future.

Engel, Richard, “The Hostage,” Vanity Fair, April, 2013. You want to know how hard it is to report the news in some parts of the world? Richard Engel deals with that just a bit in his report on his own kidnapping in December. He and his crew survived due to cunning and luck. I’m not sure I could have been as clear-headed as he was, nor do I think I would return to dangerous foreign assignments after this incident. He was and he has. Fascinating stuff here.

Remnick, David, “Danse Macabre: A Scandal at the Bolshoi,” The New Yorker, March 18, 2013. I’m weirdly interested in the attack on the artistic director of the Bolshoi Ballet in Russia. The combination of art, politics, attempted murder, ballet reminds me of a novel, except several people are living and suffering through it. Remnick lived in Russia for years, so he got interviews I haven’t seen anywhere else. Fascinating stuff for the prurient among us. 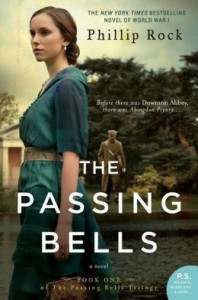 Rock, Phillip, The Passing Bells, William Morrow edition 2012. I first read this novel in 1981, in its first paperback incarnation (which had a much better cover). Someone at William Morrow (or maybe Rock’s estate/agent) remembered the book and tied it to the Downton Abbey craze. The book is Downtonesque in very uncanny ways, which makes me wonder if Julian Fellows read it.

I had loved this book when I read it all those years ago, so much so that I looked for the remaining books in the series and never saw them. I didn’t frequent places that sold hardcovers at the time, and apparently my library didn’t have the next book, Circles of Time, which I’ll deal with below. (Yes, I know, out of order, but hey, if you’re scrolling down, this makes more sense.) I searched and searched for the rest of Rock’s books for maybe 15 years before giving up.

The rerelease provided an opportunity to read this again, which might have been a bad thing, considering how much I had enjoyed the book the first time I read it. It’s always dangerous to revisit, particularly when you’re older and wiser and more jaded about literature.

I’m happy to report that I loved the book all over again. I did note that Rock broke all those rules of writing that workshops and writing teachers waste their time with: main characters die off stage; the book has no true POV character; it’s about a place and time, not about people. And yet the book works so marvelously, that I closed it with tears in my eyes.

The Passing Bells begins in June of 1914 and goes to 1919. World War 1, which is something we don’t see much in fiction these days, was a truly devastating war, in ways that are almost unfathomable. I think I probably enjoyed this book more now than I did in 1981 because I know more about the history. So when one of Rock’s characters heads off to Gallipoli, I feel a horrible chill before he ever arrives.

This novel is still one of my favorites, even after decades. I’ll probably reread it again at another point. It is a true classic.

Rock, Phillip, Circles of Time, William Morrow edition 2013. Circles of Time was published in 1981 and I missed it somehow. I came at this book with trepidation; after all, I had been searching for it for thirty years, with the expectation that it will be as good if not better than The Passing Bells. It isn’t as good, but that’s a function of the topic, not the writer’s skill. Without the devastation of World War 1, the method that Rock uses to explore a generation is fascinating, but not quite as compelling. There isn’t as much drama here.

Still, it’s a fantastic read. The novel deals with the way that survivors of the Great War deal with the loss of friends, the loss of family, and the loss of their world. It’s not a downer, though, because others have found opportunity in the loss—not just opportunity in business, but the chance to love someone completely unsuitable in old world terms.

I highly recommend this book. The third, A Future Arrived, waits on my nightstand, but I need a break from historicals before I delve into it. 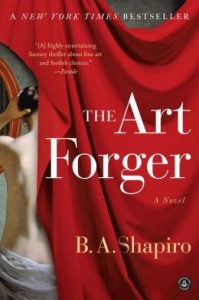 Shapiro, B.A., The Art Forger, Algonquin Paperbacks, 2013. In a review of this novel, a critic called it “a debut novel.” As I read The Art Forger, I found myself doubting this was a debut. The author had too many skills, knew too well how to make a narrative work, and knew too much about a career as an artist (writer, musician) to be a first-timer, even a brilliant first-timer. As I started writing this up, I decided to look up B.A. Shapiro, and found that she’s been publishing novels since 1993. I suspect, if I look, I’ll find short stories in the mystery digests as well. She also writes as Barbara Shapiro, and I seem to recall seeing manuscripts from her in the 1990s, whether at Pulphouse or F&SF I’m not certain.

Anyway, all of that would be neither here nor there if The Art Forger were a bad book. It’s fantastic book. One of the pull quotes at the front of the book warns that you shouldn’t start this book if you have something you need to do, and boy, oh, boy is that right. Who would have thought that a book about a woman painting would be impossible to put down? I found myself talking to it like I would a movie, warning the heroine not to do something, or exclaiming aloud about what was really going on.

For a moment—a brief moment—I thought I had this book figured out. I congratulated myself on being brilliant, turned the page, and the author acknowledged my solution, then told me why it was impossible. Dang it! The book led me back and forth and forth and back until I didn’t know what was real and what wasn’t.

Beautifully written, great characters, marvelous setting and a gripping read. I couldn’t want anything else. Now I need to order those backlist titles that the publisher deliberately hid from me when it tried to convince me that B.A. Shapiro had never written for anyone other than Algonquin. (How does that serve readers well, I ask you. [Okay. We all know it doesn’t.])

Buy this one. You won’t regret it.

Steele, Allen, “Ticking,” Solaris Rising 2, edited by Ian Whates, Solaris 2013. Wonderful story that almost feels like a Stephen King nightmare about a group of people trapped in an airport hotel after all technology shut down or went insane. There is a literal ticking clock, or so it seems. The story is fast, tense, and exciting, with a kicker ending. I’ll say only this: It felt like this story could have been in our second issue of Fiction River without any stretch at all. Marvelous stuff here.

Toobin, Jeffrey, “Heavyweight,” The New Yorker, March 11, 2013. Fantastic essay on Ruth Bader Ginsberg. Toobin gives a lot of her personal and work history. He also focuses on how hard it was for a female law student to get work in a law firm when Ginsberg graduated from law school. She’s had an amazing distinguished career that had a huge impact on gender issues, dating long before her arrival on the court. Read this and learn what kind of woman sits on our nation’s highest court.