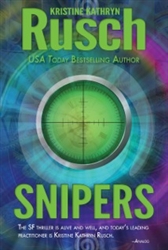 Today is Snipers official on-sale date. You can now get the book in all formats from e-book to audio to trade paper. If your local bookstore doesn’t have a copy, make sure they order one.  You can order ebooks from Kobo, Barnes & Noble, Amazon, Smashwords, and other ebookstores. Audio books from Audible, which is doing some heavy promotion this week. And the trade paper wherever books are sold or follow this link.

Here’s a bit about the book, from the back cover, to some of the good reviews it’s already received.

The Carnival Sniper – as famous as Jack The Ripper. And like Jack The Ripper, never caught, his identity lost to history. In 1913, the Carnival Sniper terrorized Vienna, murdering the famous and not-so-famous alike. Police Detective Johann Runge never caught the Sniper and his failure defined the rest of his life. In 2005, best-selling crime writer Sofie Branstadter receives permission to use modern forensic investigative techniques on the Sniper’s victims. She believes she can figure out the identity of the Sniper, but she needs the help of Runge’s great-grandson, classical pianist Anton Runge. Together the two of them plunge into a world of scientific evidence and fantastic clues, all leading to one unbelievable conclusion.

It’s also been getting great reviews.

Set in an alternate reality, this story switches from 1913 to 2005 as the reader follows along on the trail of a killer. Chilling murders, mind-blowing suspense, a touch of time travel and a bit of romance combine for a thought-provoking, entertaining vacation from reality.

This is a fast-moving thriller, and the ending implies that a sequel is in the works.  I’ll be reading it.

Snipers is an excellent amalgamation of history, thriller, mystery & science fiction. Rusch lays out the period in meticulous detail, as only she can.

2 responses to “Snipers is Out!”