Short Stories! Nelscott! Diving! What More Could You Want? (Don’t Answer That)

Short Stories! Nelscott! Diving! What More Could You Want? (Don’t Answer That) 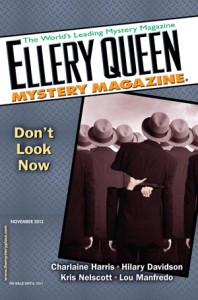 This month sees the publication of two of my short stories in the Dell Magazines. “Sob Sisters” marks the first appearance for my Kris Nelscott pen name in Ellery Queen Mystery Magazine, and the first publication for Nelscott in about 5 years. Don’t worry, Nelscott fans, the newest Smokey novel will come out in March. It’s called Street Justice. The story here features Valentina Wilson, whom you’ll remember from Stone Cribs and “Family Affair,” in her new life in Wisconsin. And for those of you who are going to ask, I have a series of books about Val, which I had hoped to start writing this fall. I have half of one, a third of another, and two-thirds of the third already done–just in the wrong order. (Damn my process.) I would have finished them too, if it weren’t for the Retrieval Artist novel deciding to take a sideways turn.

None of that is either here nor there, except to say, please pick up the latest Ellery Queen Mystery Magazine in print or digital format. “Sob Sisters” stands alone and is, I think, a great introduction to who Valentina Wilson has become. 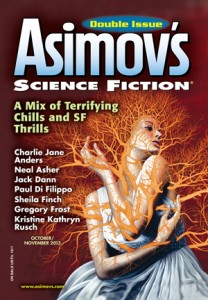 And now to the second story: Asimov’s Science Fiction has just published “Encounter at Starbase Kappa.” It’s a novelette in the Diving Series. You’ll get a sneak preview of Skirmishes. The story stands alone, but it is wrapped (in very different form) in Skirmishes. For those of you who’ll ask, Skirmishes releases on September 17, and you’ll be able to get it in trade, ebook, and audio formats. Right now, you can preorder only in two forms and in two places. You can preorder an ebook on Kobo, and you can preorder the audio on Audible. (For those of you who are wondering, Strangers at the Room of Lost Souls tells the same tale from a different point of view, some of which is also in the novel.)

“Encounter at Starbase Kappa” involves Coop and his crew in a mission he never told Boss about. The mission is self-contained, and does standalone. Asimov’s has published an excerpt here. You can buy the magazine in print or digital form.