About this time, you Retrieval Artist fans have started looking for the next book. In December, it’ll be one year since the previous book, Blowback, came out, and in a perfect world, you would have the next Retrieval Artist novel before the end of 2013. The book is even completed.

…there’s been a snag.

In fact, there’s been a snag since I started what I’m now calling the Anniversary Day Saga. You see, initially, I was going to write a book called Talia’s Revenge. Since Flint retired to raise Talia at the end of Duplicate Effort, I figured that he wouldn’t do much for a few years. Talia’s Revenge starts after she finishes all of her schooling.

I wrote the opening section to that novel, and referenced a big Moon crisis. Then I frowned, realized I had no idea how we got from Duplicate Effort to Talia’s Revenge, and thought that I would write a novella to explain it to myself.

That novella quickly turned into Anniversary Day, and as you folks who’ve read it know, the small issue resolve; the larger ones do not. Nor do they resolve in Blowback, although other things happen. In the middle of writing Blowback, I wrote 10,000 words explaining something about clones to myself, then realized that was a novella. 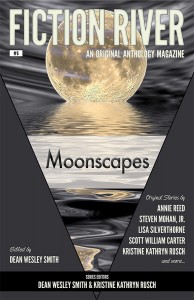 That novella, A Murder of Clones, will appear in Fiction River: Moonscapes in February. However, as I finished the novella, I realized that the protagonist, Judita Gomez, has some information for the folks on the Moon. I needed to explain to myself how she got from the Frontier to the Moon.

You folks are starting to get the picture: I write novellas to explain things to myself.

I figured I’d write a second novella. 80,000 words later, I had a full novel. It’s technically the next in the Retrieval Artist series, only there’s no City of Armstrong, no Miles Flint, no DeRicci, nada.

Now, let me speak to you as one reader to another. If I had gotten that book and had to wait a year for another one, I would have been pissed. What about Miles? Talia? DeRicci? Nyquist? They’re not even mentioned.

So, I decided to write the next book, before releasing Judita’s book (also titled A Murder of Clones: the novella is just the opening to her novel). I’m in the middle of that novel. It does feature Miles Flint and DeRicci and Nyquist and some others you haven’t met yet.

When I started this particular book, I thought maybe it would wrap up in two books. Then I figured it might take four. Now I’m thinking three: the book I’m writing, the next book, and a book I’m tentatively calling Resolution.

I’ve seen your e-mails and tweets and comments. I know you guys want a resolution to the Anniversary Day saga. So do I, and I don’t want to stretch it out over years. So the plan, designed with WMG Publishing’s help, is that all three (or four or five) remaining novels will get released within weeks of each other. Either we’ll release one per week until we get to the last book of the saga or we’ll release one per month. That’ll be decided after I finish the saga itself.

I’m not writing any other fiction until this project is finished. I’m projecting I’ll have the books finished by the end of March at the very latest. Then they have to go into the publishing system. Well before that, you’ll know when the next book will come out and what the publication plan is.

You’ll have the resolution to the Anniversary Day Saga sometime in 2014. I plan to blog about the progress of this massive project irregularly on this website, with the title Retrieval Artist Update. So you’ll know what’s going to happen as I know. You’ll also see a bit of the sausage being made, as I change my mind or as more plot complications reveal themselves. I’ll be as up front as I can without spoilers.

Thanks so much for your support and enthusiasm for this series. I greatly appreciate it.