I read a lot in December, too much of it forgettable. I read a Christmas novel by one of my favorite romance authors, a reissue that I had missed, and was pretty disturbed by the behavior of the male protagonist. I read two other novels that just didn’t thrill me, and a lot of short stories that left me…shrugging, I guess.

I did read some wonderful work, however, and  it’s listed below. Some are Christmas stories, which will also appear next year in my holiday recommended reading list, and others have no whiff of the holiday in them. Enjoy!

Allyn, Doug, “The Snow Angel,” Ellery Queen Mystery Magazine, January, 2014. Detective Dylan LaCrosse gets called to a crime scene outside a beautiful home. A dead girl, dressed as if she were going to prom, dies in the snow. She had waved her arms and legs before dying, and she looked like a perfect snow angel.

Somehow, Doug, who is one of our best writers, imho, manages to throw a novel’s worth of twists and turns into this fantastic story. I thought it might be simply a good Doug Allyn story (and you know you’re in the hands of a great writer when good is exactly what we expect, and we hope for more) until the last section. And that section made the story absolutely perfect. Read this one. It is a holiday crime story, but you can enjoy it year round. 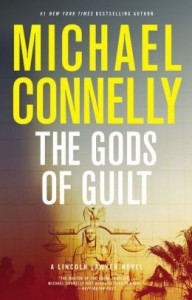 Connelly, Michael, The Gods of Guilt, Little, Brown, 2013. As people who regularly read this monthly blog feature know, I love Connelly’s work. He’s a terrific writer. He also bears a lot of ambivalence about his defense lawyer character, Mickey Haller. Which is okay, since Haller feels the ambivalence as well.

The phrase “The Gods of Guilt” refers, at least initially, to the jury in a trial. Haller’s dealing with a new murder case that dove-tails on a much older case, the case, in fact, that brought Mickey Haller to our attention in The Lincoln Lawyer. Midway through the book, I felt as if Connelly’s ambivalent feelings toward Haller would harm the book. By the end, I had tears in my eyes—and no, I won’t tell you why, although many reviewers have.

Don’t read any other reviews of this one. Just read the book. And enjoy. 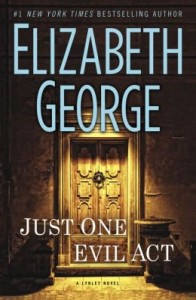 George, Elizabeth, Just One Evil Act, Dutton, 2013. After more than 30 years of studying fiction writing, you’d think I would have learned it all. Fortunately, I have writers like Elizabeth George and Stephen King to keep me humble, and make me realize I’m still a baby when it comes to writing skills.

Just One Evil Act is a big honkin’ tome of a book. Seriously, if I dropped the hardcover on one of my cats, there would be a vet visit immediately following. I bought the book because I like owning paper copies of her books, but I would have bought the ebook as well, if it had been priced at the $6.99 that it’s priced at now. Before the hardcover was released, the ebook was listed at $11.99, and while I can justify buying two copies in two different forms, I can’t justify spending nearly $40 on something I wanted to read just for the sake of convenience.

There. Bitching done. Because that’s my only complaint with this novel—the way that the publisher priced the e-book before release.

The novel itself—well, I guess you could start reading George here, but it’s better to start with another book because once you know and love these characters, this book is fraught with emotion. It felt so real and so heartbreaking and so impossible that sometimes I just had to set the book down for a few minutes to let all the information and emotion sink in.

George starts with her main character Thomas Lynley (and ends with him too), at the situation that we already know if we’ve read the previous book. If we haven’t read it, it doesn’t matter, because the situation’s new to Lynley. That all by itself is brilliant storytelling, but the writing and storytelling gets better.

Barbara Havers is trying to contact Lynley because her neighbor’s girlfriend has kidnapped their child and disappeared. This is spousal kidnapping at its ugliest—the woman had refused to put the man’s name on the birth certificate because he refused to divorce his wife. (He is Muslim, and he doesn’t want his wife and family to suffer the shame of a divorce [or something like that]). Anyway, he has no real rights over his daughter, the marvelous Hidayyah, who has been a ray of sunshine in many of the previous books. That she’s gone, and gone in a heartbreaking way, is only the beginning.

She gets kidnapped for real in Italy a few months later. I only tell you this because the book’s jacket copy mentions it. Otherwise, I would have kept it secret, since the second kidnapping comes about 100 pages in. More heartbreak, more difficulties, and exquisite clash of cultures—from a Pakistani Muslim and his former family living in England, to the Italian justice system, from upper class (multilingual) Lynley dealing with a sympathetic Italian police officer to Havers blundering her earnest and ever-so-important way around Italy and unable to communicate, this novel is chock full.

But the master class for me is something so subtle, something I didn’t realize anyone could do or that it was even possible. George suggests a what-if romance for the readers that the characters involved never see. Because we’re in one point of view, we see how that character reacts to another. Because we’re in the other character’s point of view, we see that character’s reactions. We realize these two people are meant for each other, and because they can’t communicate, they will never ever achieve their happy ending.

Heartbreaking. Marvelous. Spellbinding. Page-turning. Just One Evil Act is one of George’s best novels—and that’s quite a compliment. I didn’t think she could get any better, and she did. 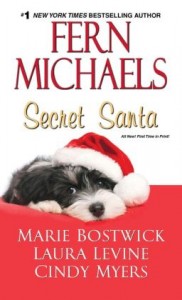 Junod, Tom, “The Dominance of Loooooong in The Age of Short,” Esquire, October 2013. I’m not sure I agree with Junod in his essay about tiny attention spans and the way that serials and series hold our attention, despite our need for short work, but he sure did make me think. So take a peek, and see if you agree.

Levine, Laura, “Nightmare on Elf Street,” Secret Santa, Zebra, 2013. The voice in this piece caught me from the very beginning. In fact, I read it before I read anything else in the volume and, as a stickler for reading anthologies in order, that’s truly saying something.

A freelance ad writer thinks she’s going to get an advertising account; instead, through mishaps, she gets hired as a Santa’s Elf at Toyland. She doesn’t correct the mistake because she needs the money. The story’s a typical cozy—a rather bloodless (deserved) murder, lots of suspects, and a goodly amount of humor.

I laughed, fell in love with the cat, and enjoyed the situation. I’ll be looking for Levine’s other books, which is exactly what novellas like this should make me do.

Levy, Ariel, “The Perfect Wife,” The New Yorker September 30, 2013. Wonderful, wonderful piece about Edith Windsor, the woman who brought the lawsuit that led the Supreme Court to find the Defense of Marriage Act unconstitutional. I love courageous women, and Windsor certainly is one. Read this (and if you have political objections, I don’t want to hear them. Send them to The New Yorker). The article made me cry.

Peters, Ellis, “The Trinity Cat,” The Big Book of Christmas Mysteries, edited by Otto Penzler, Vintage Crime/Black Lizard, 2013. This particular story, originally published in 1976, the story is about a real cat acting in a real cat way. Set on Christmas Eve in a small English village, the story features an older woman’s murder, a tight cast of characters, and some wry observations. It’s a cozy, but not a light or funny one. I enjoyed it a great deal.

Runyon, Damon, “Dancing Dan’s Christmas,” The Big Book of Christmas Mysteries, edited by Otto Penzler, Vintage Crime/Black Lizard, 2013. Every time I read a Damon Runyon story, I realize how much I enjoy his work. I just never seem to seek him out. I’m not sure why. I loved this one as well. First published in Collier’s in 1932, this story is firmly set in its era. It begins in a speakeasy, involves a drunken pact, and…works. Somehow. I loved it. 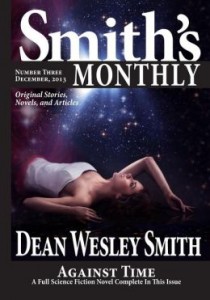 Sedaris, David, “Now We Are Five,” The New Yorker, October 28, 2013. Dave Sedaris is known for his humor writing. This piece is not humor, although it does have his signature biting wit. If anything, this essay shows the defense mechanism that developed the biting wit.

“Now We Are Five” concerns a trip to the beach made shortly after Sedaris’s sister committed suicide. The Sedaris children are all grown, now, and his mother has also passed away. But they were either trying to mourn their lost sister or trying to recapture the past, or both. The pain here is palpable. The confusion at finding this crossroads is also palpable.

The writing is human, and reminds me, at least, that none of us ever quite become experts in living. Highly recommended.

Smith, Dean Wesley, “The Storm from a Relic,” Smith’s Monthly, December, 2013. Dean handed me this story in his Poker Boy series on a Sunday night. Dean had written the story in a white-hot-heat, and it reads that way. It starts and never lets you go. Poker Boy stories are always fun, but rarely do they have thriller moments. This one does.

A man walks into an Oregon poker room, and Poker Boy instantly feels some kind of danger, but can’t tell why. Why becomes the point of the story, but whoa-boy is the why huge. I finished this story fast. You will too.

Westlake, Donald, “The Burglar and The Whatsis,” The Big Book of Christmas Mysteries, edited by Otto Penzler, Vintage Crime/Black Lizard, 2013. First published in Playboy in 1966, this story is as much sf as it is mystery. If I say much more about the story, I’ll spoil it. It’s very short, it has a couple of twists, and it made me laugh. In fact, it’s my favorite story in the volume so far (which isn’t saying a great deal, since I only managed about 100 pages of this massive tome before I stopped to save the rest for next holiday season).