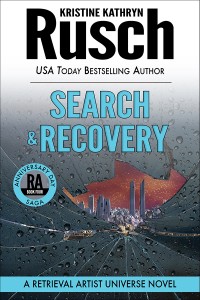 Here we go again. Another Retrieval Artist novel finished. I’ve just turned Vigilantes over to Dean, who is my first reader. I’ve finished four novels in less than two months. Sounds impressive, right? But it’s not that impressive. It would be more accurate to say that I’ve assembled four novels in less than two months. I’ve been writing on these and the remaining Retrieval Artist novels since last year.

For those of you who don’t know what I’m talking about, check out the previous four updates. The short of it is that A Murder of Clones, the next novel in the Retrieval Artist universe, will appear in January (update #4 has the cover), followed by a book per month until this entire saga set inside the overall series is over. The completion of Vigilantes takes us through April. I’m working on the next novel now.

It sounds so simple–and is, for those writers who write in order. I don’t. I write bits and pieces and then assemble them. (You can see more about the process if you read the previous updates.) I’m moving back into a bits-and-pieces phase. I need to know what each character is doing before I glue the pieces together. So I don’t expect to have another I finished! announcement until the end of July. (I hope it’s the end of July. Or earlier.)

In the meantime, I will keep you updated about covers and copy edits and how everything is moving along.

With that in mind, here’s a few other fun updates. First, I just got Search & Recovery, the February book, back from the content editor. She found a few things (whew!) but not as many as I feared. (Writing out of order creates its own problems.) So the book is moving on to the copy editor this week. Allyson Longueira at WMG Publishing designed the Search & Recovery cover, which I’ve added to this post.

Second, some of you have been asking about  preorders. I’ll have more information on that in late August–and believe me, I’ll let you know. 🙂

Finally, if you’ve been wanting to start the saga, you can do so rather cheaply for the next two weeks. Anniversary Day, the first book in the saga, is part of a science fiction Storybundle that benefits the Clayton Memorial Medical Fund. You can set your own price. Here’s more information on the whole thing. (You can also buy this as a gift for a friend if you want to share the saga with someone else.) The Storybundle only lasts until July 9, so you need to act on this offer quickly. I doubt Anniversary Day will be on sale again any time soon.

I’ll have more news and another cover in a few weeks. Until then, enjoy the summer!