Because of touring schedules, I’m in two bundles this week. Not my tours–music tours. I’m so fortunate to be part of a Storybundle that includes six bands and five fiction writers. (I had to choose my words carefully here, since the musicians write as well.) This new bundle, called The Fantasy Music Bundle, is the brainchild of Peter J. Wacks. Now, pay attention, because you might end up with tons o’stuff if enough people buy the bundle. As with all storybundles, you get to set your own price. (The minimum is $3.)

Here’s how Peter says he came up with the idea for this bundle:

Often when I read, I hear a soundtrack going in my head–if I don’t outright have one playing in the background. Getting offered the chance to curate a bundle immediately led me to the conclusion that I wanted to try to create just that experience. But, I wanted a little more, too.  I wanted bands that told a story with their albums… and books that made me hear music when I read them.

I love music that tells stories, and one of the side benefits for me is that I got introduced to a few bands I hadn’t heard of.

This bundle is different from the other bundle in which I’m participating in this way: Each contributor to the bundle included a “B” side (for those of you old enough to remember [or savvy enough to purchase] vinyl). If enough people participate in the bundle, a B-side will be unlocked for everyone who already bought the bundle. If you want all of the “B” sides, you’ll need to invite some friends to the bundle. It takes 1,000 sales to unlock just one “B” side.

As I mentioned, this weekend, the bands will be playing concerts and doing heavy promotion. But it would be nice if the fiction people managed to get one B side unlocked before the weekend. Just so that we have a few bragging rights. 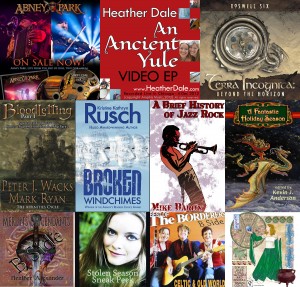 This bundle, like the SF bundle, also encourages you to donate to a charity. The charity for both bundles is the Clayton Memorial Medical Fund. Last I heard (a week ago), the SF bundle earned $1500 for the charity. I have a hunch it’s earned a lot more by now.

Here’s a link that explains the SF bundle.

My contributions to this bundle are, of course, musical. If you pay the minimum, you’ll get the very first novel I ever published, The White Mists of Power. This book caused quite a stir when it was published because I did something in the middle of the book that all writers will tell you won’t work. I was young and new and untrained, and no one told me I couldn’t do that. So I did it–and it worked. But the book isn’t a gimmick book. It’s about a lost prince, a bard, and a quest for the throne. I’m very proud of this book, and I think you’ll enjoy it.

My “B” side is a novella that won the Asimov’s Readers Choice Award. I write about music a lot, and Broken Windchimes is all about music and being a musician–in a made-up culture, of course.

The other writers in the bundle, New York Times bestseller Kevin J. Anderson, Bram Stoker nominee and game designer Peter J. Wacks, co-producer of Xena: Warrior Princess Steven L. Sears, YA bestseller Rhiannon Paille, writer and theologian J.R. Boyette, and Nexus creator Mike Baron. A sidebar on Mike–back when we both lived in Madison, Wisconsin, he was my editor at Isthmus. I had a different last name then, and he just found out this year that Kris Rusch was that shy kid whose nonfiction he bought. (Thanks, Mike!)

The musicians in the bundle are equally impressive. Abney Park is the quintessential steampunk band of our time. SJ Tucker performs mythpunk folk rock–and, with the troupe Fire & Strings–does something called fire-spinning (which I’m going to need to investigate). Canadian Heather Dale’s music specializes in original songs that tap into legends, history, and fantasy. Multi-award winning Australian band BordererS specialize in all kinds of things, but their offerings here are Celtic & Old World music. I happen to love Celtic music and am pleased that there’s quite a bit here. In addition to BordererS, Celtic fiddler Alexander James Adams has music in this bundle, as does Pandora Celtica (who also do one of my favorite things–“nerd-tastic” filk. Yes, I love filk too.)

Anyway, we’re on our way to unlocking the first “B” side, from Pandora Celtica, so head on over and pay at least $3 for lots of reading and lots of music. And while you’re there, check out the other two bundles–an impressive crime bundle that I’m (sadly) not involved in, and the SF bundle which has all kinds of sf goodness.

Fill your summer with music and books, while contributing to a good cause.

I won’t be in any bundles for at least six months, so this is your last chance to get something discounted from me for quite a while. Of course, if you sign up for Storybundle’s newsletter, you’ll find lots of other great writers and wonderful charities to help over the summer. I can’t tell you how many books I’ve downloaded from a bundle this year alone. (Seriously, I can’t tell you–it’s too many for math-challenged me to count.) Great bargains and great causes. What’s not to love?