This was the post I had planned to make last week, and ended up putting up the kitten video instead. If you haven’t seen the video, click here. In sixty seconds, it’ll teach you how to edit an anthology. Seriously. Honestly. Really. Go look.

Now, here’s some of what I planned to tell you. The rest will apparently have to wait until next week (even though I have author’s copies).

Alfred Hitchcock’s Mystery Magazine has published my short story, “Crossing The River Styx.” It’s a mystery set in the Oregon Caves in the 1920s. You can read an excerpt here, but buy the whole issue. Hitchcock’s is always fun. You can get the magazine in print and digital formats, which I greatly appreciate. (Plus I love this cover.) 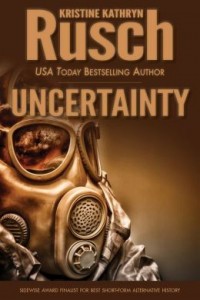 Next, WMG Publishing has released my acclaimed novelette, Uncertainty, in ebook format. Uncertainty was one of this year’s Sidewise Award finalists for Best Alternate History (Short Form). The Sidewise committee has honored my work before, and it means a lot to me because I love the stories they’ve chosen to highlight in the past. It’s always flattering to be on that list.  If you love alternate history, you would do well to look at the short list every year. As a reader, I’ve enjoyed every story I’ve seen on the list. (This year, Vylar Kaftan won for “The Weight of Sunrise,” a wonderful story, as are the other nominees.) You can order on all e-commerce sites, including Amazon, Kobo, Barnes & Noble, and iTunes. 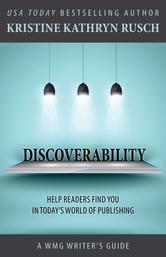 WMG has taken advantage of Amazon’s new preorder capability for ebooks to offer Discoverability as a preorder. You can also preorder the book on Kobo, and iTunes. The book will be released on October 14, 2014, in ebook and paper formats, but you can reserve your digital copy now.

WMG has done the same with Fiction River: Past Crimes, which will appear in November. I edited the volume, and will have a Kris Nelscott story in it. You can get the standard edition on Amazon and iTunes or the special Kobo edition with extra stories. Or…you can head over to the Fiction River Kickstarter, see the new rewards will be added later today (including a cool one from the kind folks at Kobo), and subscribe or get some bonus rewards for even less money. How great is that?

More updates next week. I think this is enough for now. And yes, yes. The Retrieval Artist update. I hope to do that before the week’s end.