On August 19, I startled myself when I realized I hadn’t finished a book in the previous two weeks. I’d read quite a few of them. One bored the heck out of me, and I couldn’t remember the names of the characters from chapter to chapter as I was reading the book! Another was so gross and graphic that despite the strong characters, great setting, and fantastic writing, I couldn’t keep going. I paged through it to the end, saw that it was going where I thought, and realized I didn’t have to finish the book if I didn’t want to.

I didn’t want to.

I began to wonder if the problem was me, then I read a manuscript that I’ll be recommending next month (when you can actually buy it), and realized that I wasn’t the problem at all. Except maybe my choices were the problem. I was trying a new writer (to me), a longtime bestseller whose work came highly recommended. That was the gross book. And I was reading a book by a writer whose previous novels I loved—about five years ago. The last two, I haven’t been able to finish due to excessive boredom. She’s taken me to those places before, with those characters, doing the same thing.

Apparently, all the books I didn’t like had clustered in August. As I got deeper into my September reading, I realized that I was doing just fine; I had just picked up books I didn’t much like in August. It happens. It just usually isn’t that obvious to me.

I’ve listed the best of the best from my August reading below. Thank heavens for these pieces. They provided much needed escape. 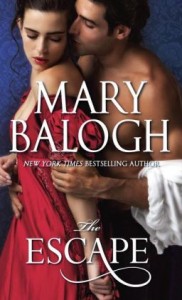 Balogh, Mary, The Escape, Dell, 2014. I had preordered this novel, and when it arrived, I looked at it and thought, “I’m not in the mood for a Regency romance.” But I decided to read the first page—and I had to finish.

I love Balogh’s novels, some more than others. In the hands of a lesser writer, this novel would have failed miserably. In the middle of the book, the conflict changes utterly, and where we thought the story was going to go wasn’t where it went. Often that’s a set-up for disappointment, but not here.

The story starts simply: Samantha’s husband has just died, and she’s stuck with some pretty horrendous in-laws (England early 19th century). She meets a man badly injured in the Napoleonic Wars. They’re both rebuilding their lives. But she can’t really rebuild in her current situation, and he isn’t sure what to do in his. She’s the instigator here—not in the relationship, but in the escape of the title. She wants out of her oppressive situation and asks him to help her. He agrees—and the novel zooms forward.

Extremely well done, even for the standards of the always-excellent Balogh.

Burton, Jaci, All She Wants For Christmas, Carina Press, 2010. I read this book at night while I was trying to read the graphically violent book. I didn’t want to read that book before bed, and this one—with a country music singer heroine—spoke to me, even though it’s not Christmas time. (I think it shows how desperate I was to get away from that book that I went not only to a romance, but a Christmas romance.)

This is the first book I’ve read by Burton. I liked it. It was heartwarming, just like it should have been. I ordered the other two books in the series the moment I finished it, which tells you she did well. In fact, she did so well, she’s the one who convinced me I didn’t need to torture myself with that other book any longer. So I didn’t. I’m reading romances again instead. 🙂

DuBois, Brendan, “Cold Island” Ellery Queen’s Mystery Magazine, August, 2014. Twisty little Brendan DuBois story, set in the deep New Hampshire Cold. The police bring a defense attorney who often works pro bono to a standoff on an island across an ice-covered lake. It seems the man holed up in the cabin asked for her. Why, I can’t tell you without ruining the story. And that’s not even the main twist… Ah, what Brendan can do with a few thousand words. Well done.

Smith, Douglas, Playing The Short Game: How To Market And Sell Short Fiction, Lucky Bat Books, 2014. Full disclosure here: I wrote the introduction to this book. I agreed to write it because I’d been reading Doug’s blog on Amazing Stories’ website. I knew he had a lot of good things to say.

But I don’t always plug books that I’ve written introductions for, at least not in the recommended reading. I might like them, but I might not love them enough to recommend to you.

Doug has won Canada’s Aurora Award for speculative fiction three times, and have been a finalist for the international John W. Campbell Award, Canada’s juried Sunburst Award, the CBC Bookies award, and France’s juried Prix Masterton and Prix Bob Morane. He’s one of the best short story writers in the business, and one of the best at the business of short story writing. I learned a few things from this book, and sometimes I think I’ve seen it all.