Two New Short Stories, a Goofy Video, And An Opportunity

Two New Short Stories, a Goofy Video, And An Opportunity

It must be urban fantasy detective week or something. I wrote a lot of short stories in the past year, and only two of them were about non-human or magical detectives. Both of those stories appeared this week. 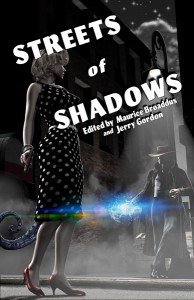 The first is in a project that Maurice Broaddus and Jerry Gordon edited through Alliteration Ink. They Kickstarted the anthology, Streets of Shadows, and this weekend, they will have a launch party at Ohio’s Context SF convention. (If you’re in Columbus, head on over, and get your book signed by the attending writers.) There are two different editions of this book, with two different covers. One is a Kickstarter edition (and honestly, I prefer that cover), and the other is the mass release cover. I’ve put the Kickstarter cover here, because I just love it. It makes me want to read the book. (It also made me support the Kickstarter.) The book includes stories from Tom Piccirilli and Nisi Shawl, and so many other great writers. Kevin J. Anderson is also in Streets of Shadows–and he’s in the latest Fiction River, as well, which I’ll talk about below.

My story here, “Hand Fast,” came from a chance discussion at the grocery store. I kid you not. The opening line, “The most romantic gift anyone ever gave me? A gun,” was something one of the grocery clerks mentioned to me in passing, and I just had to come up with a story about it. My story is urban fantasy set in New York, not crime fiction set on the Oregon Coast. 🙂 You can buy Streets of Shadows at your favorite bookstore or in the usual places online. 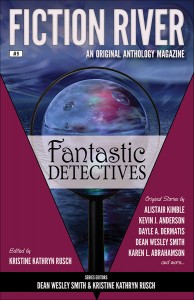 The other urban fantasy story I’ve published this week, “An Incursion of Mice,” is actually set on the Oregon Coast, but you can’t tell, since the detective here is an indoor cat who thinks he’s street smart. His street name, not that he deserves one, is Wall T. You can find this story in Fantastic Detectives, which is the ninth volume in the Fiction River line. You’ll find another Kevin J. Anderson story, and lots of other great fiction as well. I edited Fantastic Detectives, and I think it’s one of the strongest anthologies I’ve ever edited. I hope you pick it up.

The opportunity I mentioned in the headline is also about detective fiction, only it’s for my Kris Nelscott incarnation. On Monday, you can get A Dangerous Road, the award-winning first novel in the Smokey Dalton series, for $1.99 in ebook, on all sites. (You might be able to find that deal earlier, as the prices slowly change.) The low price will only last 48 hours, so if you’ve been thinking of trying my Smokey Dalton series, now is the time. Head over to your favorite sites, and click away.

And the goofy video? It’s another from the Fiction River Kickstarter. If you want to get Fantastic Detectives, let me humbly suggest you get the volume through Kickstarter, because you’ll get a better deal. Deal or not, supporting Kickstarter or not, you should watch this video: 11 Things You Didn’t Know About Fiction River. It’s a lot of fun. (By the way, the Kickstarter is nearly done as well. We’d really like to hit the 15K stretch goal, so if you’re thinking of trying Fiction River as well, now is the time.)