Hah! I’m on time this month! Yay! And you’ll get a second Recommended Reading during Thanksgiving week. 🙂

And yes, this month, we’re heavy on the Linda Fairstein. I binged, did a workshop, and had a lot of personal stuff to deal with. So I didn’t read much else—except work in manuscript form that I’ll recommend when you can actually buy it. I was even slow on my magazine reading, and not finding a lot to recommend either. Ah, well. Deal with it. I’m nearly done with my binge, so there will probably Fairstein in November, and then we’re back to mixing it up a bit.

I did read half a business book on Marvel Comics, until I realized that I hated it and didn’t trust it. Everyone I knew who had worked in comics was being portrayed either as unimportant or a complete jerk. I knew about the in-house fighting, but the book didn’t seem to reflect the sides as I knew them. Plus, the author spent 20 pages setting up a lawsuit, only to mention in passing that it had been settled. That’s when the book flew across the room. I’m sorry I wasted so much time on it. I kept thinking it would get better. It didn’t.

Even with the Fairstein emphasis and the Marvel miscue, the list contains some other good things for you to locate. As I mentioned above, I’ll post the holiday recommended reading in a few weeks, so you don’t have to go through the older posts to find some holiday books.

In the meantime, enjoy these!

Boynton, Graham, “The New Jet Age,” Vanity Fair, July, 2014. This article is totally unfair, particularly since I suffered through the indignities of flying Alaska recently (and won’t fly with them again until I see an article like this one about them. Yes, even in this day of horrid plane flights, my experience with Alaska was even worse than you can imagine).

Because Boynton is writing for Vanity Fair, he’s covering luxury airlines and in this article, he’s covering the most luxurious of them all, Emirates Qatar Airways and Etihad. And the article depicts the luxury areas of Dubai International Airport. The airport is less interesting to me than the planes. First class seating the size of a NY studio, elbow and leg room in coach. A focus on a pleasant experience. Oh, if only! Read it and weep. (But don’t read it while flying coach in the U.S. You might do something you regret.) 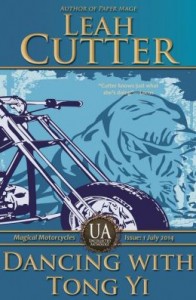 Tong Yi works for a transport company that specializes in work for those who aren’t quite human. His mission? To deliver a message to one of eight immortals. The story is breathtaking and won’t leave my brain, like much of Leah’s work. A quick read, and worthwhile.

Fairstein, Linda, Bad Blood, Scribner Kindle edition (first published in 2007). Fairstein finally heads into the court room for this book. I wish she’d spend more time there. But there are other perks in all of the books—the New York history, the characters, the plots. This one leaves the courthouse in the middle, when there’s an explosion in the city, and then we delve deep (pun intended) into the world of sand hogs—the workers who work underground in New York building and maintaining things. Fascinating. And the mystery is good too.

Fairstein, Linda, The Bone Vault, Pocket Books Kindle edition (first published in 2003). On the night of a big to-do at a major museum, the body of a researcher is discovered in a sarcophagus. The crime is somewhat riveting, the frustration of finding anything in New York’s major museums fascinating, and the character interplay marvelous. Also, this book deals with 9/11 head-on, which is both sad and important. I couldn’t put The Bone Vault down. 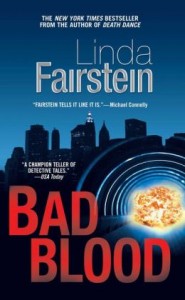 Fairstein, Linda, The Deadhouse, Pocket Books Kindle edition (first published in 2001). I loved this book. There’s an old castle-like building on Roosevelt Island that I’ve always wondered about. Fairstein’s main character Alex Cooper used to wonder about it too. She then experienced it.

One of the things I love about Fairstein’s books is their love for New York City, and the history of that city. This book focuses on the death of a university professor—a battered woman with a complicated history. Some of the details are over-the-top, and honestly, I didn’t care. The descriptions, the island, the history—all marvelous. And worth the read.

Fairstein, Linda, Entombed, Scribner’s Kindle edition (first published in 2005). Shades of Edgar Allan Poe. Construction workers discover a woman’s skeletal remains buried inside a wall in the house where Poe once lived in New York. She wasn’t killed by Poe or anyone in the 19th century; the remains date from 1979 or 1980. But she was buried alive.

Creepy and interesting book, featuring a lot of Poe arcana, and lots of nifty New York details. I knew a lot of the Poe stuff, less of the New York stuff. Something very dark happens in this book as well, something that has repercussions for upcoming books, and it adds a great twist in the middle. This one stuck with me for quite a while.

Fairstein, Linda, Killer Heat, Anchor mass market paper (first published 2008). Fairstein writes really well, so when she’s writing about New York in a heat wave, complete with dead bodies that have gone unnoticed for a time, you can actually smell them. She starts there, and finds her way through New York history, a cold case, and some rather terrifying details. Fascinating. 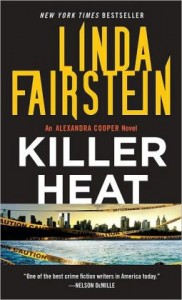 Fairstein, Linda, The Kills, Pocket Books ARC (first published in 2004). This one is a strange and complicated book. I read the ARC because I knew in our inherited book collection there had to be some Fairstein. Oddly, all we had was this one. Dunno why there weren’t more. Anyway, an impoverished woman is murdered in Harlem, and possibly assaulted. She has an amazing history (think Josephine Baker), and that history plays into the case. There’s another case here as well, less interesting but connected. I had trouble putting this one down.

Hunter-Gault, Charlayne, “Lifting My Voice,” AARP Magazine, August/September, 2014. Charlayne Hunter-Gault has had a distinguished journalism career, but most people don’t know that she was one of two students who integrated the University of Georgia in the late 1950s. She writes about that terrifying experience in this essay, along with the ways that she coped with the hatred coming at her. Read this. It’s amazing.