The Interim Fates Available for Preorder!

The Interim Fates Available for Preorder!

You can now preorder all of the Interim Fates novels…on three ebook sites: Amazon, iBooks, and Kobo. If you want the books from another site (I’m looking at you, Barnes & Noble), then you’ll have to wait until the release date. The trade paper editions will also be available on the release date.

If you want a reminder when the books come out, please sign up for the Kristine Grayson newsletter (over there, on the right), or watch this space.

Tiffany Tumbles: Book One of the Interim Fates. 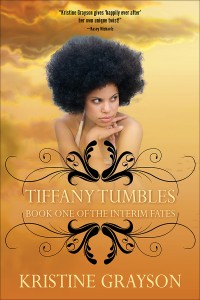 Recently fired from her job as an Interim Fate, one of the most powerful people in the world, Tiffany VanDerHoven must move in with her mother in Eugene, Oregon. Tiffany finds living without magic hard enough, but high school? Not even movies or TV prepared her for that.

Tiffany has tumbled into “the real world,” and it baffles her.

To make matters worse, she can’t talk to her sisters Crystal and Brittany (the other two Interim Fates)—except for an hour or so, on the weekend, under strict parental supervision. Parental, meaning their mothers’ supervision. Because none of the girls can talk to their father, the Greek God Zeus, who started this entire mess when he wanted his daughters to use their Fateness to get rid of true love.

Tiffany needs to face her future, but first she must decide what kind of future she wants. One with her crazy magical Greek God family? One in the “real world”? Or can she discover the strength to straddle both worlds?

Whatever Tiffany decides will impact not just her own fate but her sisters’ fates, too. 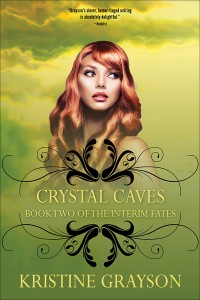 Crystal’s mother calls her “The Unexpected Consequence of a Momentary Lapse of Judgment.” Her half-brothers call her “The Unwelcome Visitor” because they didn’t even know she existed until a few months before. Her stepfather doesn’t even speak to her.

Crystal’s beloved sisters, Tiffany and Brittany, decided to move in with their mothers after their father, Zeus, tried to use the girls to destroy true love. Crystal did what she always does—she did what her sisters wanted. Her sisters have loving mothers. Crystal doesn’t.

She doesn’t fit in. And she can’t go home to Mount Olympus. She can’t even contact the Fates. Should she ask Zeus for help? Or should she gut it out in “the real world” with no love? 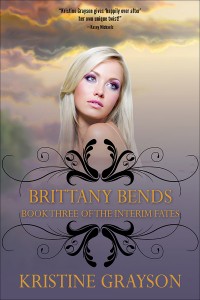 Brittany misses her sisters—and her magic. After being fired from her job as Interim Fate—which she only had because her dad, Zeus (yeah, the Zeus), tried to get rid of true love—Brittany finds herself living with her mom and stepfather in someplace called Superior, Wisconsin. Oh, and her eight half and step siblings live there, too.

Eleven people, one house, and a whole lotta new things to learn about. Things like snow and sunburn and, well, being mortal.

But that might prove harder than she thinks. Because Zeus wants his daughters back. Three of them, anyway. The three former Interim Fates: Tiffany, Crystal, and Brittany.

Tiffany and Crystal already made their choices. Now Brittany must decide whether she will fight for what she really wants—if she can even figure that out—or bend to the will of her powerful father and the allure of magic.