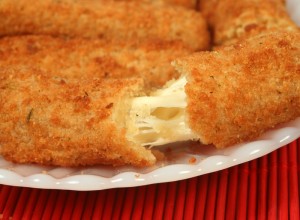 That’s how I described my brain today to a few folks. Fried cheese. Not Swiss cheese, which would imply that there’s space for air to go through. Fried cheese, all melted together—crusty on the outside and unrecognizable goo on the inside.

Last night, I turned in Women of Futures Past: Classic Stories, right on time. I’m unbelievably stunned I did this.

For those of you who don’t know, this is the first anthology in the various projects I’m doing for Women in Science Fiction. This anthology will be published by Baen in 2016. For some reason, I had thought six months was a reasonable amount of time to put this together. Part of that assumption, I guess, was because I thought I had most of the stories picked out. Then I realized that what I had chosen really didn’t fit with what I was trying to do.

So I read and worked and contacted people and mentally wrote and rewrote the 10K essay that was part of the contract. Then I actually wrote the essay, plus other materials, and revised those, and checked all of my facts, and found out that often Wikipedia was wrong (surprise, right?) and The Encyclopedia of Science Fiction was often wrong and Fancyclopedia was mostly right (but limited in its scope for my purposes). Primary Sources R Us for Rusch. Thank heavens we have a large collection of digest from the time period in question, and I had access to other materials.

Anyway, this is a long way of saying that once I downloaded all of this information onto the page, my brain quit. It’s just refusing to work today. (You should’ve seen how long it took to figure out how to spell crusty.) I could power through a major blog, but I’m not going to. I promised myself when I came back to blogging that I would take days like this more or less off.

However, if you’re missing your blog fix, head over to the Coode Street Podcast. Last night, in the middle of compiling everything, I took 90 minutes to talk with Gary Wolfe and Jonathan Strahan about my various projects, including indie publishing, the Retrieval Artist, and the women in science fiction material. We ended up having a long discussion about editing, which I found fascinating. I hope you will too.

See you next week, when (I hope) spelling crusty is easier and my brain actually works again.