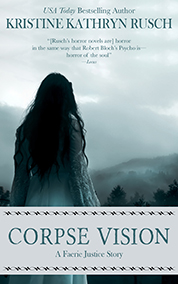 “Corpse Vision” by USA Today bestselling author Kristine Kathryn Rusch is free on this website for one week only. The story’s also available as an ebook on Amazon, Kobo, iBooks, Barnes & Noble, and from other online retailers.