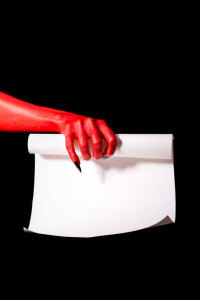 Boy, I’ve been seeing a lot of crappy contracts lately, and not at all from the place I would have expected. I expect bad clauses in traditional publishing contracts. Too many writers don’t hire intellectual property attorneys to vet those contracts, relying instead on agents, and that leads to all kinds of terrible book contracts. If you want to see what some of those are, look up the contract posts here  or pick up a copy of Deal Breakers 2013 (or wait for the new version).

They’re not because they’re making huge mistakes. Here’s how:

Because everything has changed in the last few years, Newbie Editor can fundraise on a great anthology idea all on his own. He might run a successful Kickstarter or use Patreon to fund the anthology. He might get a group of backers to put up money in exchange for “shares” in the project.

Whatever happens, Newbie Editor’s grand idea can became a marvelous book without years of work and without involving any traditional publishers.

A lot of great anthologies have appeared in the last few years because of this opportunity. Some great magazines have come on the scene as well. Dean and I took advantage of the changes to see if there was interest in our Fiction River project, which is still going strong, 3.5 years after our exploratory Kickstarter.

Almost everyone who crowd-funds an anthology or starts a magazine does so with the best of intentions. These newbie editors want to pay their writers well and put out fiction that wouldn’t have a home in more traditional venues.

Many of these projects have gone by the wayside because the Kickstarters got mismanaged or because publishing a magazine turned out to be a lot more expensive than Newbie Editor initially thought. For every successful project, half a dozen have gone down in flames.

Unfortunately, though, even the successful ones hit some weird bumps in the road. Some have lovely ebook editions, but most put out the ugliest paper editions I’ve ever seen. I supported one crowd-funded anthology by getting the reward with the paper copy. It arrived and was unreadable. Eight-point type, single spaced, words out to the edge of the paper—awful.

I’ve learned my lesson. I now expect things like that, because book design is an art form. Now when I support a new crowd-funded project, I only get the e-book edition. The paper editions are a complete crapshoot.

Unfortunately, this is an area where Newbie Editor and his publisher violate their own ideals. Usually, Newbie Editor was (once upon a time) a traditionally published writer. The publishing company is often owned by Newbie Editor.

And Newbie Editor is just like any other traditional writer: he never hired an IP attorney to vet his book contracts. He let his agent do it. Newbie Editor never negotiated his own short story contracts either, so he has no idea what the good or bad clauses are. In fact, Newbie Editor knows nothing about copyright or contracts—and it shows.

What happens is this: after Newbie Editor has found stories he loves, he offers to buy them from the writer for whatever fee was promised in the writers guidelines. Usually Newbie Editor gets this part mostly right. The email will say something like:

I’d like to buy your story for my anthology. We pay 10 cents per word for World English.

But there’s enough information in that email that Short Story Writer writes back, happy that she’s made a sale.

And here’s where it gets ugly.

Newbie Editor sends a contract to Short Story Writer. Most short story writers are happy to make that sale. They sign the contract and send back without a second thought.

But people who read my blog and/or who have been my students know better than to do that. They actually read the contract.

And what they find is that the contract is a nightmare.

Most of the contracts I’m seeing from Newbie Editors and new online magazines make no sense. I mean it. They contradict themselves on every page. Sometimes they ask for things they don’t need while ignoring things they do.

The most egregious contract I saw was just a few weeks ago. Some idiot publisher/editor had changed the language in his very bad traditional book contract to be a short story contract. This ten-page short story contract (not kidding) including right of first refusal of the poor author’s next short story! And a non-compete. And all the other horrid things we’ve been discussing about traditional publishing contracts.

But most of these newbie editor/publishers take clauses at random from every contract they’ve received in their publishing careers. The contract have boilerplate traditional publishing language that refers to other parts of a contract that aren’t there. It’ll ask for North American Rights and then say that the story will be on sale around the world in all languages. It’ll claim that the contract is for non-exclusive rights, but the writer can’t sell or publish the story without the publishers permission.

I’ve received some of these cobbled-together contracts myself. I’ve worked with the editor/publisher to devise a fair contract for me, although in one or two instances, I just walked away. The handwriting was on the wall that the project was going to be a disaster, and lo and behold, it always ended up being one.

The flip side of the cobbled-together indie contract is the draconian one. Some of these new companies have hired some young, cheap attorney to develop the company’s contract. Often that attorney is the friend of a friend, and not an IP attorney at all.

Those contracts don’t just want the writer’s firstborn child, they want everything the writer owns in perpetuity. They’re terrifyingly nasty, the kind of contract that makes a traditional publishing contract seem nice and cuddly.

Writers are signing these contracts because writers are mostly ignorant about legal things. And as long as the original newbie editor/publisher is in place, the writer will probably be okay. After all, the contract was born in ignorance, so it will to live in ignorance. No one will notice how horrid the clauses are. No one will ever exercise them.

But should the project become a success, and should someone with half a brain decide to buy out the editor/publisher on the project, that new someone might actually enforce the contract clauses.

One of the short stories I sold this year is heading to Hollywood because most of the writers involved in the anthology have had successful films made of their work. If this anthology (which isn’t out yet) sells to film as an anthology series (which is how it’s being marketed at the moment), you can bet that major entertainment lawyers will be vetting every word of the initial contracts, looking for advantage.

That almost never happens with short story anthologies. “Almost never” isn’t the same as “never.” Because it has happened four times in twenty-five years in my career.

And when something is in the realm of the possible, then writers need to make sure their asses are covered for that situation.

I know a lot of you reading this want to edit your own anthology or magazine. I know many of you have already set up crowd-funding on projects.

You can’t ignore the contract phase. You need to get help developing your contract from knowledgeable people. You need an IP attorney to help you write the contract, but before you do that, you need to know what you want from that contract.

If you don’t understand copyright, then you will not understand the contract that the IP attorney comes up with.

Let me tell you this: a contract is a single document, like a short story. A contract has a beginning, middle and end. If you write something in the front of the contract, it will have an impact on points in the middle of the contract. And the contract might make no sense without that one thing up front—which might look completely insignificant to you.

However, I looked at all of those contracts with a new light as I was preparing for my own editing contract. And most of those contracts lacked the same thing—any legal protection for the editor should it become clear that the reprinted story harmed a living person or libeled someone or was plagiarized. (Sometimes these things aren’t discovered with the first publication.)

I added the protections for me into my contracts. But I understand contracts. I’m sure I’ve missed a few things. And I left out some clauses the attorney wanted me to include because, had those clauses been in the contract, Writer Kris would never have signed on with Editor Kris.

But I understood what I wanted from that contract, and I understood how to achieve it. If I didn’t quite know how to phrase it, well, that was what the attorney was for.

Newbie editors and publishers, I know your hearts are in the right place. But you are probably harming yourself and your writers by making your contracts an afterthought.

Writers, you need to beware of the contracts when you’re working with a sincere first-timer. The contracts I’ve seen lately are nightmares. Make sure you don’t sign one.

Negotiate it. Or walk away.

Yeah, yeah, I know. Why am I getting my undies in a bundle for a single short story? Because sometimes a short story is what a writer becomes known for. Think Flannery O’Conner’s “A Good Man is Hard To Find” or Charles Dickens’ “A Christmas Carol.”

If your classic tale has a contract that gives ownership of the story to your publisher—whoever that might be—then you’ll get no money for the decades of reprints, the movie deals, or the gaming rights.

The worst thing you can do is assume that something like that won’t happen to you. It’s just one short story, right?

This blog has to remain financially self-sustaining. That’s why I include a donate button at the end of every business post, but I don’t do so on the fiction posts.

If this post has been valuable to you, please leave a tip on the way out.