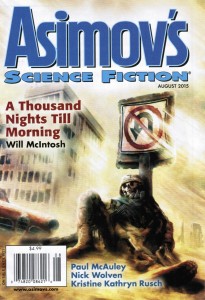 Asimov’s Science Fiction has started a new feature on its website. Every year, Asimov’s asks its readers to choose the best stories of the year. The top five in each category get notified, and then Asimov’s reveals the winners at a ceremony in May.

This year, Asimov’s has put the nominees up for free on its website. The writers had to give permission for this, of course, and only one didn’t. The number sixteen reflects that, along with two ties, apparently. The top five sf poems are up as well.

I have a story in the Best Short Story category, and a novella in the Best Novella category. The short story is one of my favorites. The novella is the same novella that will be in three Year’s Bests this year—”Inhuman Garbage” which is a standalone part of my Anniversary Day Saga. 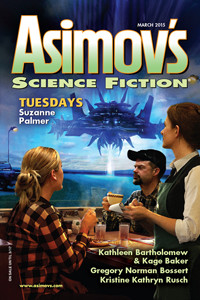 What I’m most thrilled about, though, are the other nominees. As usual, because of all my other reading, I’m behind on my issues of Asimov’s. So I get to read the others as well. I’ve read a few, like David Gerrold’s spectacular “The Great Pan American Airship Mystery, or, Why I Murdered Robert Benchley.” But I missed a bunch of the others, including a new Allen Steele, Robert Reed, and Sarah Pinsker.

These stories will be available until May. Let your friends know!