The Catholic Church saved him. At the moment he needed someone most, Father Joe offered him salvation. And he spent his life, and career, trying to live by the rules and order of Catholicism.

But when he returns to Brooklyn to work for the Church after years as a Chicago detective, he finds himself investigating those he thought beyond reproach. And the deeper he digs, the more questions he finds—about his past, about himself, and about the future of the very faith he once considered his salvation.

This alternate history story originally written for the Vatican Vaults anthology takes place in a world where Pope John Paul (I) does not die a month after his accession in 1978 but instead reforms the Church and opens up the most secret parts of the Vatican Library to scholars. New York Times bestselling author Kristine Kathryn Rusch explores what might have happened if some Church secrets came to light years earlier than they have in our own reality.

“The Island of Lost Priests,” by Sidewise Award-winning author Kristine Kathryn Rusch, is free on this website for one week only. The story’s also available as an ebook on Amazon, Kobo, iBooks, Barnes & Noble, as well as other online retailers. 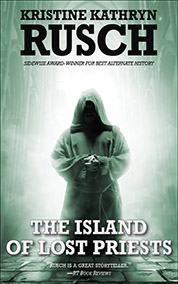 The Island of Lost Priests

2 responses to “Free Fiction Monday: The Island of Lost Priests”