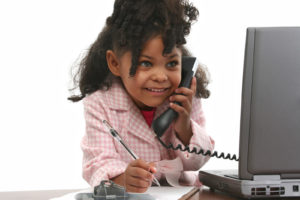 You’re a divorce attorney with more that thirty years experience. You charge hundreds of dollars per hour for your expertise. You have what seems to be a relatively easy divorce on your hands. After all, the client has told you that he and his soon-to-be ex-wife agree on the terms. They simply need you and her attorney to hammer out the details.

It’ll take a few hours, but not much more than that.

So, not a lot of money for your law firm, but enough to cover your time.

You head to the conference room where you agreed to meet the wife’s attorney. And, instead of the named partner whom the wife claims is her attorney, you find a fresh-faced twenty-one year-old with a stack of papers and a laptop in front of her.

You ask where Big Name Lawyer is, only to be told that he’s on vacation and unreachable for the next two weeks. He has asked the twenty-one-year-old to handle this very simple case for him.

The scenario has to stop here because, in the real world of attorneys, what Big Name Lawyer has done would get him called before the bar and, depending on his clout, either disbarred or reprimanded severely. There would be serious and public consequences for sending a young person with absolutely no legal experience and no guidance to represent a client in a legal matter.

In the world of literary agents, however, such things are common.

In fact, I just dealt with a similar scenario on one of the anthology projects I’ve been working on.

Please note: To protect the stupid and to keep this somewhat confidential, I am publishing this blog weeks, maybe months, maybe years, after the negotiations. And, I’ll wager, I’ll run across this scenario several times before this blog gets published. (In fact, I have. I am now keeping count. I’ve run into lesser versions of this a total of eleven times since I experienced the events described below.)

Anyway, what happened was this: Super Big Name agent, the name on the door of the agency, went on a month-long vacation after I contacted him requesting permission to reprint a short story. He left the negotiations in the hands of his brand-new assistant, a young woman who had just graduated from college with—you guessed it—an English degree.

To her credit, the young woman was conscientious and did her very best. I would hire her in a heartbeat—as a receptionist, or maybe, in data entry, or as a file clerk, with the hope that she might learn how to be a professional something or other some day. She was sincere and hard-working.

She tried hard to negotiate a contract she did not understand at all. She asked me, the person on the other side of the desk from her, the person on the opposite side, why the contract I had sent (a standard short story contract with a freelance editor) was only one page long, instead of the 25 pages like all the other contracts she saw from the same publishing house.

I had to explain to her that she was looking at book contracts from a publisher. I was a freelancer and as such, I had the 25-page long contract with the publisher. I was simply contracting for the reprint rights to one short story. Me. Just me. And if the project went south from the book publisher, I could take the contents and move to another publisher.

I cringed as I sent that email, wondering if I would have to explain the word “freelance.” But, good English major that she was, our recent college graduate knew how to look up words in the dictionary, and she understood “freelance.” She didn’t understand any of the rest of it, although she gamely tried to negotiate the contract—asking for all the wrong things, for the wrong reasons, and, if she had prevailed, hurting Big Name agent’s client substantially.

Fortunately for her, I had ran out of patience about two weeks into Big Name agent’s vacation and copied him on an email that I sent to her, an email that included the entire unbelievably stupid thread.

Note that Big Name Agent isn’t a lawyer either, and has no right to negotiate a contract for anyone. He too is practicing law without a license. Me, I was representing myself, so I could get away with handling the negotiations on my own. (Just like I could in court, if I were stupid enough to try. And also note that a lawyer looked over the short story contract before I ever started using it.)

Big Name Agent immediately took over the negotiations—or, rather, sent a curt letter to both me and the assistant saying everything was just fine. If he had actually been doing his job, he could have fine-tuned the contract. At least five other parties in the same anthology had done so—most of them authors representing themselves.

Because, you see, I issued a contract that was good for both parties, but the contract did favor me. Because I issued it. I was perfectly willing to negotiate a few points—and did, but only if asked.

In other words, Big Name Agent did a terrible job all by his little lonesome, even if you take the recent college graduate out of the picture.

Realize that the client had no idea this was going on. (My next step, if the Big Name Agent hadn’t responded, would have been to send a third e-mail copying the writer as well as the Big Name Agent.) The client still doesn’t know. Maybe if I ever see the client in person, and I feel comfortable discussing it, I’ll mention something.

Because it’s not my job to say anything. It’s none of my business.

But here’s the reality of the situation:

Instead, Big Name Agent sends a recent college graduate with no knowledge of the business at all to represent Famous Writer in a legal matter.

It’s against the law in all fifty states to practice law without a license. So not only is Big Name Agent breaking the law, not only is Famous Writer getting cheated by Big Name Agent (with a bait-and-switch), but Big Name Agent is asking a young naïve recent college graduate to break the law in order to do her job. And I’ll wager she has no idea she did anything illegal when she negotiated with me on behalf of the agency’s client.

I felt for the recent college graduate. I really did.

I thought Famous Writer was unbelievably dumb to have an agent handle a short story. (Big Name Agent’s cut would have been barely in three figures.)

I have known Big Name Agent for over two decades now, since he began his career with another agency. I thought he was a stupid asshole back then. I think he’s a more polished version of the same stupid asshole now.

Yeah, yeah, those of you with agents are thinking, That would never happen to me. I’m pretty sure it has happened to you. Big Name Agent was training his assistant just like he had been trained thirty-some years ago. I know agent after agent after agent who dump their assistants on small tasks that aren’t “worth” the agent’s time. Often those small tasks include contract negotiation for “small” (meaning “not lucrative”) projects.

But you writers with agents, you’re sure, you’re positive this has never happened to you.

How do you know? Do you know who does the actual negotiations of your contracts with your publishers? Have you asked your agent?

Who handles his business while he’s on vacation? What does his assistant actually do?

Some time ago, I wrote a post on something else that mentioned in passing that I would never ever ever recommend that a new writer hire an agent any more. Many traditionally published writers shared the post, but disagreed with me on agents.

And every single traditionally published writer said this: I can’t sell my book without my agent. No editor will look at a book without an agent.

I can’t sell foreign rights without my agent. No foreign publisher will look at a book if it’s not presented by an agent.

Neither of these things are true.

But pretend they are true. So, do this, traditionally published writers. Hire an agent to sell your book. Pay that damn agent a flat fee for doing so, not 15% for the life of the copyright. Then hire a lawyer to negotiate the contract. A lawyer who specializes in intellectual property.

Your agent, the English major, is going up against experienced corporate lawyers who know that changing one word in a contract—one word—can change the meaning of the entire contract. I mentioned that to one Big Name Agent a few months ago, and she laughed at me.

That’s a myth, she said.

I just about fell out of my chair. And because I couldn’t believe she actually believed that, let alone spoke that phrase aloud, I said, So you have an attorney handle your contract negotiations, right?

Oh, she said, we have one on retainer. I don’t use his services that often. Once the boilerplate is negotiated, there isn’t much more for him to do.

This woman handles millions of dollars in client book deals. And she knows almost as little as our friend, the recent college graduate.

Have I put the fear of agents into you yet?

There is no reason to hire an agent to represent your work in 2016. None. No reason at all.

Not even to sell your book. Because you can do it. And then you can hire a lawyer, who will charge you a flat one-time fee, not 15% for the life of the copyright, to legally negotiate your contract for you.

Get your head out of the sand.

If you listen to me about nothing else, hear this: Hire a lawyer to handle all your legal negotiations.

Just like you would if you were heading to court.

Stop thinking agents will save you.

Because you’re getting screwed if you don’t learn how to be a 21st century business person.

And the sad thing is this: Like Famous Writer, you have no freakin’ idea what’s going on with your career.

In two weeks or so, we will discuss how to hire an attorney. I have one more thing to say about agents before that. Since I’m waiting with the attorney post, however, let me just say this one thing:

People, you have to stop being afraid of attorneys. Despite what you hear in the media, they’re not terribly expensive or horrible people. They’re good at what they do…and we will discuss that later this month.

And if you feel like you’ve learned anything or if you value what I’m doing here, please leave a tip on the way out. Thanks!

31 responses to “Business Musings: My Agent Will Negotiate (Contracts/Dealbreakers)”