Yeah, okay. I had fun with the title of this post. Remember, I warned you that September is news month, right? I’m trying to bunch up the news by topic or genre or title.

Today’s a bit easier than most to bundle up the news. Today I get to share with you The Epic Fantasy Bundle, curated by New York Times bestseller, Kevin J. Anderson. For those of you who have never bought a Storybundle before, it’s really cool. If you pay as little as $5, you’ll get five of the eleven ebooks. If you pay $15 or more, you will get all eleven books in the bundle. You can also donate to a charity, The Challenger Center for Space Education, which I happen to think is mighty cool. So…you set your own price.

Order the books and get them immediately, downloaded to your favorite ereading device.

The ones you’ve probably heard of include Brandon Sanderson, Jason Henderson, Allen Drury, Michael A. Stackpole and Tracy Hickman, who is writing with Dan Willis on a book that looks really intriguing which I haven’t ready yet (and will!).

The ones who might be new to you include writers I’m familiar with, like Ramon Terrell and Hilary Benford. Shean Pao and Neo Edmund are new to me, which is forgivable in the case of Shean Pao, since she’s a new writer and this is her first novel. But how I missed Neo Edmund is beyond me. He’s worked in the entertainment industry for years, and has graphic novels so reknown they’re taught in school.

And then, of course, you can get one of my novels. I’ll wager it’s one most of you have never heard of. My novel, Heart Readers, came out in the early 1990s. I was initially frightened that my original publisher would reject the book back then because the couple that the novel centers around are two women. But no one said a word, and the book has been reprinted all over the world. It went out of print in the States about twenty years ago, and finally WMG Publishing was able to bring it back. I love this book, and hope you will too. Here’s the back cover copy:

Twin princes—the curse of King Pardu’s line. Pardu killed his own twin to secure the throne. Now Pardu, dying, wants to use old magic to determine which of his sons will rule—without murder. The old magic calls for heart readers to determine which twin has the pure heart. But the heart readers must work in teams—female teams. And the team chosen by the palace has a history, a violent history, a history that makes these two women unsuitable to choose the next heir. Or maybe that history makes the heart readers the only ones who know the truth…

“Compelling…(Rusch) pushes the narrative along at a galloping pace. A fine example in novel form of the old Hollywood adage: ‘A good script needs three things…story, story, story.’” —The Dark Side (England)

There’s one other book in the bundle that I wanted to highlight. It’s a Fiction River volume titled Unnatural Worlds. It contains stories by Jane Yolen, Esther M. Friesner, Richard Bowes, David Farland, and many more great writers. 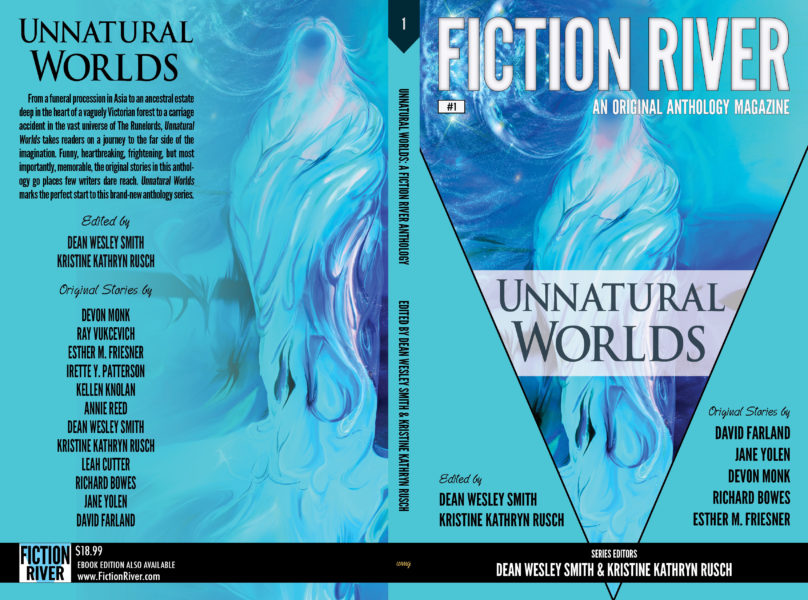 Now, here’s the thing: Many of you know that we’re doing a Kickstarter for Fiction River right now. We’ve hit our target and our first stretch goal, but if we hit all of our stretch goals, we’ll be able to do amazing things.

I know many of you haven’t read Fiction River yet, so here’s what I propose: Buy this Storybundle. Read Unknown Worlds first, and if you like it, then subscribe via the Kickstarter. The Kickstarter discounts subscriptions, so you’ll save money doing it this way.

The other cool thing about the Kickstarter is that we’re putting up short videos every few days to do our best to let you get a feel for all the different kinds of stories we publish. (The videos often feature me or Dean or the editors or some of our writers.)

One of the first videos to go up is the fantasy stories video, which I’ve attached here.

So head over to Storybundle and pick up great works by amazing writers. Sample Fiction River, and if you like it, head over to the Kickstarter to get a discount on a subscription or the next issue that interests you.

And thanks for all of your support!