Lots of reading this month for the anthology workshop at the end of the month, plus some line editing. I still managed to find time for some other reading, but it was a push.

I got a new mystery from one of my favorites, started it, and immediately stopped. Turns out our newly retired hero has just been diagnosed with COPD. Having dealt with death—and that kind of death—too much in the past two months, I simply couldn’t go forward. Maybe later.

So I’m back reading Regency Romances. I decided, midway through one of the books, that the Regency world as portrayed in modern romance is a shared fantasy world, where nothing bad happens, there’s barely any politics, and even terrible stuff, like poverty, isn’t really that bad. Then I felt guilty for escaping into that clearly made-up world, and then I talked myself out of it. And then I wondered about story ideas–not for Regency, but for other not-so-bad worlds where nothing really terrible happens. We’ll see what the old imagination will come up with.

Here’s what I enjoyed the most.

Balogh, Mary, Someone to Hold, Penguin Putnam, February, 2017. This is the second book in the Westcott series. I had really liked the first book (see last month’s list), and I was looking forward to this book. Then it came in the mail, and I started it immediately. I liked this better than the previous one, maybe because the heroine, Camille, hurt more than the heroine of the other book. Camille has lost everything, and recently, and she’s trying to keep a stiff upper lip in the face of horrid emotional devastation. For reasons she doesn’t even understand, she offers to teach at the orphanage where her half-sister grew up. Camille meets Joel, her half-sister’s best friend (emotional brother, really) and they do not hit it off at first, but eventually come to respect each other. This is a heartwarming, delicate book about learning how to love, not just romantic love, but love of family and children and friends. Really beautifully done. 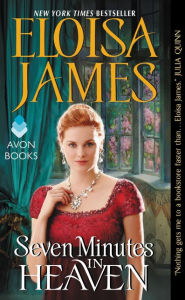 James, Eloisa, Seven Minutes in Heaven, Avon, 2017. I read another Eloisa James earlier this month. It was good enough for me to buy this book, but I didn’t feel like recommending the previous book because a week later, I couldn’t remember the plot. I doubt I’ll ever forget this one. I was so sorry to finish it.

Eugenia Snow runs a “registery” that sets up the gentry with a governess. Our hero, an illegitimate son of the gentry, has just received custody of his half-siblings, who happen to be legitimate children of a (now-deceased) duke. He wants to raise them right, and they are…ahem…difficult. 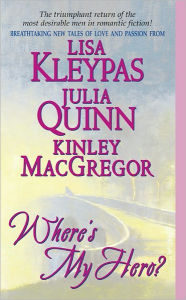 Quinn, Julia, “A Tale of Two Sisters,” Where’s My Hero?, Avon Books 2003. I think I’ve had this book since 2003, but I didn’t read it until late January, early February. Which simply goes to show that you can’t expect instant results (indie writers) when your stories are collected in an anthology or a bundle. Readers get to the book when they get to the book. (And indies, if you want to read some insipid back cover copy, read what’s on this book. The “letter to the reader” back cover was a thing for a nanosecond, and unfortunately a few of my books got slapped with it too.)

Where’s My Hero is an anthology that includes Lisa Kleypas and Kinley McGregor (Sherrilyn Kenyon). I’m sure I bought the anthology for the Kleypas story, which is enjoyable, but not something I would recommend anyone start with.

This story, however, is a lovely Regency romance, witty, fun, and filled with sparkle. Ned Blyton–lord of something or other–is supposed to marry Lydia Thorton. He’s given up on finding any woman to marry who interests him on any level at all, so he’s “settled” for Lydia without even getting to know her. The problem is that at the week-long pre-wedding celebrations, he meets Lydia’s sister Charlotte, who is the woman of his dreams. Now, he has a real problem: how to live with the promise he’s already made and the promise he wants to make without hurting anyone.

There’s a subplot here I can’t tell you about, and lots of great characters, including a rather delusional poet. I found myself laughing out loud. This is a great place to start if you’ve never read any Julia Quinn.

Schrager, Adam, “Grain of Truth,” On Wisconsin, Winter 2016. I have no idea when the University of Wisconsin Alumni magazine became go-to reading for me, but it did. And this year, it’s been hitting out of the park. I’m learning something with every article. The Winter issue has a good article on smokejumpers, which is fun to read and fascinating for someone who watches the western wildfires nervously every year, and another good article on the history of Civil Rights and agriculture. (I learned something about the amazing Fanny Lou Hamer that I might have known, but I hadn’t known, if you catch my drift.)

The article that, though, that is must-read, in my not-so-humble opinion is the one mentioned above. (You can read it for free if you click the link above.) The article involves the celebrity trial of the 20th century. No, not that one. And no, not that one either. The one in the 1930s–the killers/kidnappers of the Lindbergh baby. Apparently, some important investigation and evidence came from Arthur Koehler, a lecturer on “Wood Technology” at the University of Wisconsin and employee at the U.S. Forest Products Laboratory. In today’s terms, we would call him a forensic botanist.

He pioneered the field, through his work in this case. He investigated the handmade ladder that the kidnappers used to steal the poor baby from his cradle that night. Some of the wood came from the kidnapper’s attic, but it took a while to determine that. Fascinating stuff, which the national press ate up. They called him “Sherlock Holmes” and he had his brief moment in the sun during those Depression years. Really fascinating. And I had no idea that it had even happened…

Wideman, John Edgar“A Black And White Case,”, Esquire, November, 2016. A powerful essay, not just about the Emmett Till murder in the 1950s that gave fuel to some of the Civil Rights movement later on (particularly by increasing white awareness of the easy way that bigots murdered blacks), but also about growing up African-American in America, then and now. The most fascinating part of the essay for me was about Till’s father, Louis Till, who had been hanged by the military for crimes supposedly committed while he was serving in Italy.

I say supposedly, because of the information in this piece, and the information that has since come out about the way the military behaved with African-American service members in those years.

A very powerful piece, one worth reading. You can read it for free by clicking the link. Please do so.