Unlike June, which started so slowly I couldn’t even start the reading list until the middle of the month, July started off with a bang. I enjoyed almost everything I read, and I was reading a lot. One day per week, I started accompanying Dean on his trips to find stuff to stock the stores. He’d head off to a Goodwill or a charity shop, and leave me at Starbucks where I read and drank too much tea (and eavesdropped). Perfect afternoon for me. Perfect for him too, but in a completely different way.

I had a bumpy mid-month, where I started a couple of novels and didn’t finish, including a legal thriller that had a great voice…but it was such a Grisham rip-off that I could predict every single beat. Good legal thrillers are hard to find and I’m jonesing for one, so if anyone has recommendations, I’d appreciate hearing.

I also read three novels of Dean’s from the month. (He challenged himself to write four novels in one month.) I’ll list those as soon as they appear, so you can order them. Two Thunder Mountains (my fav) and a Cold Poker (another fav), which he didn’t get to me until August One.

Here’s the best of the rest. Enjoy! 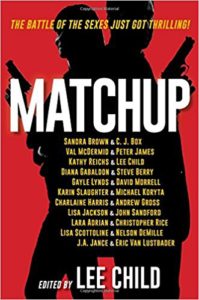 Child, Lee, editor, Matchup, Simon & Schuster, 2017. I read part of this anthology in June and the rest in July. The quality is high throughout, but I only found two stories to recommend. Unfairly, I picked the stories to recommend because they were exceptional, not because they were really good. Most of the stories in this volume are really good. I couldn’t finish one because of the subject matter (kiddie porn and child abuse), and I couldn’t read one at all. Considering the length of the anthology, that’s excellent. Two completely superb pieces, which I already told you about in June, and the rest so readable that I blew through this volume in about a week where I had no free time at all. Highly recommended. 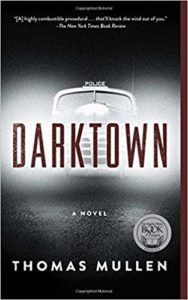 Mullen, Thomas, Darktown, Atria/37 INK, 2017. Stunning novel set in 1948, featuring the first African-American cops in Atlanta. Mullen takes you deep into pre-Civil Rights Georgia, and shows all aspects of African-American life there through his protagonists—middle class, lower class, and sharecroppers. He also creates…well, not sympathetic, but understandable…bigoted whites who are fighting the changes that are coming post-WWII.

Boggs and Smith, two of the eight newly minted African-American cops, walking their beat because they’re not allowed a car, see a nice car hit a light pole. The driver moves on, stops later, is clearly drunk and surprisingly, for that part of town, white. His passenger is female and African-American. She won’t look at the men. Things go awry, the African-American cops have to call in for white back-up which usually takes time to show up if it comes at all, and this time two cops show up immediately. The girl flees the car, but the white cops deal with the white driver…and let him go. These events, seemingly mundane, lead to a case that goes farther than anyone expects, and leads to tragedy that anyone who knows the time period would expect. Heartbreakingly real, beautifully written, and worth every moment you spend with it. If you love historical noir, and I do, this is the perfect novel for you.

Remy, Mark, “Running Home,”  Runner’s World, June 2017. Runner’s World often prints great essays that are peripherally about running. More about life and the way we live our lives. Mark Remy left his hometown at twenty-five, and returned twenty-one years later to get a sense of it, himself, and his past. This essay is about what he learned, and didn’t learn, about himself. And to top it off, there’s a nice comic of the essay in the very middle, which adds a bit. The title online is “Did Running Save My Life?” The answer is…yes, and no, and maybe. Nifty essay. 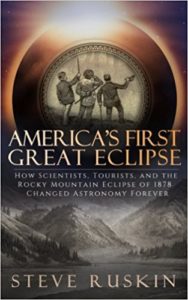 Ruskin, Steve, America’s First Great Eclipse: How Scientists, Tourists, and the Rocky Mountain Eclipse of 1878 Changed Astronomy Forever, Alpine Alchemy Press, 2017. This short little book is a great deal of fun. In his introduction, Ruskin says he wanted to write a breezy book that you could read on a plane ride. I read the book in an hour at a coffee shop, and felt like I’d seen a great little film.

History doesn’t just happen in big straight lines. Little things sometimes make a huge difference. And while I like the history of science, I like the history of politics better. So I was completely unaware of this event, but Ruskin slides in current events and famous people. I thought of a few of my own when I finished. The big climactic event of A Connecticut Yankee In King Arthur’s Court by Mark Twain takes place during an eclipse….and Twain was out west when the eclipse happened. I don’t know where, exactly, but clearly it had an impact.

Ruskin shares some anecdotes about famous scientists and introduces me to one I hadn’t known about—America’s first female astronomer. The quotes are fun, the illustrations are fun, and the timing is perfect, as my little town is the exact center of the upcoming eclipse in August. Seriously. If you want to be at ground zero (oh, wait. Sky zero?), try to show up to Lincoln Beach on August 21. Just try. Because the entire town will be gridlock—like so many places were in 1878. Really cool book. Lots of fun. Quick read. Enjoy.

Scott, A.O., “Dealing,” Esquire, May, 2017. Another excellent essay in a magazine. A.O. Scott had hit a midlife crisis. He didn’t like himself much, so he took the advice of a therapist and tried to make some friends of his own age and gender—by joining a neighborhood poker game. He wasn’t sure about it at first, but it grew on him. And the essay grew on me. His writing is good and his descriptions of the trajectory we sometimes take in midlife were spot on.