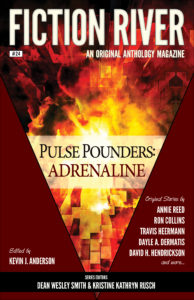 I read a lot in August. I’m line editing two Fiction Rivers, so I got to revisit some excellent stories. I’ll point them out when they get published. Right now, though, you should pick up the current Fiction River, Pulse Pounders: Adrenaline, edited by Kevin J. Anderson. I line edited that in the spring. Excellent unforgettable stories in there, especially those by Travis Heermann, Debbie Mumford, Ron Collins, and Eric Kent Edstrom. (While you’re at it, pick up the newest Fiction River Presents: Writers Without Borders. Really neat volume.)

I’ve been reading some short fiction that’s not Fiction River, most of it unremarkable. A lot of sf that seems more obsessed with terminology and technical science than with storytelling. (Very disappointing to me.) But I’m keeping at it, because I want to read some strong sf short fiction. I have shared some below, but not as much as I hoped.

I’m reading volumes that I have a story in, because they cried out to me from my desk, asking me to read it, and I decided to give in. So I have my reader’s copy (beat up), and the copy for my shelf. I’m having fun with reading these. I’d forgotten how much I loved to do it.

In my copious reading, I read a number of mediocre books by brand-name writers. I’m still puzzling over one of the books. I like this writer’s work a lot, but her heroine (for 20+ books now) is too stupid to live. Really. Half of the problems in the book could be avoided if she just did what she tells others to do. I can always tell one of those moments is coming because the author, a high-end lawyer, writes, I would never advise one of my clients to do this, but…and then the character does it and it goes wrong.

Normally I hate TSTL characters. Hate, hate, hate them. And yet I devour this writer’s books like candy. I can’t recommend them. They’re not that good. But they hook me every single time. I cannot figure out how she does it. (I certainly don’t want to replicate it, either.) I know. Weird, right?

Early in the month, I read a brand new novel in a brand new series by one of my favorite male writers. Well…the novel was as bad as a novel by a longtime pro could be. Which meant it was readable and well written, the setting was good, the background great, so it kept me all the way to the end. But wowza. He wrote an entire novel about a female lead character and while he’s clearly one of those men who is sympathetic to the women in his life, he looks at them from the outside in, not the inside out. Every man this character encounters hits on her (with one or two exceptions), but oddly, none of the women. I say oddly because if you’re that appealing, you will get sexual attention from members of your gender too. She nearly gets raped or maybe she did, she can’t remember because she was drugged, and she killed the guy who did it, so that’s okay, at least with her. She gets sexually harassed at work by every male she encounters, some worse than others. And on, and on. The novel barely passes the Bechdel Test. The rape victims in the book are male, all of the other characters (with three minor exceptions) are male, she has no female friends, and…sigh.

This book is getting a lot of press and promotion. Many many male writers write great female characters all the time, but this guy with his “brand-new series” isn’t one of them. This book is truly awful.

It sounds like I’m offended. I’m not. I’m puzzled. This traditionally published writer is a big name, but not so big that people should be afraid to tell him the truth about the book. And the truth was, it wasn’t worthy of him, and it is certainly not worthy of a series. Ah, well.

Then I read a thriller by one of my all-time favorite literary thriller writers. Or rather, half of a thriller. This writer hasn’t had a book out in 8 years. He says this one kicked his butt hard and he couldn’t make it work. Um, yeah. Because rather than the innovative marvelous stuff he wrote ten years ago, this book is all about an affair gone wrong in NYC. It’s predictable, the characters are unlikable, and the situation is so cliche (even the twist) that I finally had to give up. I scanned the ending, saw nothing unexpected, and felt sad. What a disappointment.

On the plus side, I’m reading some very good books right now. I had to abandon a dark book I was reading because my life got upended the last two weeks of the month, and I went back to some Regency romances, so I didn’t have to think. Nothing spectacular there. Nothing bad either. Just not anything I want to recommend.

I did read a lot of good things this month. And I’ve listed some of them below. As I said, my life got upended at the end of the month, and I wasn’t able to add the non-fiction articles that I had planned on sharing. Ah, well. You have some stories and a few novels to keep you busy. 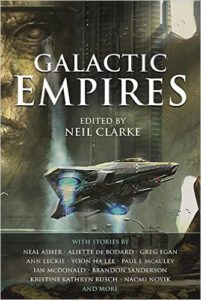 Clare, Gwendolyn, “All The Painted Stars,” Galactic Empires, edited by Neil Clarke, Night Shade Books, 2017. The title of this story echoes a famous Nancy Kress short story, and I don’t think that was deliberate, but it did set me on the wrong road for a minute. Once I got past that, I enjoyed the story immensely. Coming after the hardest of hard sf in the volume (I read in order), this story was a welcome breath of fresh air.

Told from a truly alien point of view, the story manages to create three different kinds of cultures—a long-lost alien one, a current alien one, and a human one. They intersect in creative ways, and combine to create a story with heart and a story that makes you think.

I hadn’t heard of Gwendolyn Clare until I read this story. I see that she has a novel coming in 2018. I’ll be looking for it. 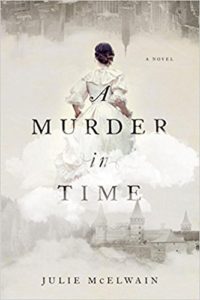 McElwain, Julia, A Murder in Time, Pegasus Books, 2017. I actually read about this book in a 2016 wrap-up of good mysteries in Mystery Scene magazine. I bought a few, thought some were horribly overrated, and dithered about reading this one. After all, it combines time-travel, thriller, mystery, serial killer stuff, and Regency romance. (I am not kidding.) It also has some weird sf stuff in the beginning that, if it doesn’t apply in the next book, simply shouldn’t be there.

This is a first novel with some first novel issues. The structure is off, especially in the front, but McElwain’s writing is so good and her character, Kendra Donovan, so fascinating, that I didn’t care. Although I found the book relatively slow until the body turns up in the lake, about 100 pages in. At that point, the novel hums. I read the remaining 400 pages in one night.

This novel is a surprise, coming out of traditional publishing. They opted to make it a thriller, which was the right call, since some of our favorite characters actually die hideously here. Yet the book is truly cross-genre in a good way.The book reminds me of Outlander. The slow opening, the mixture of romance and other genres, and then that moment when the book becomes impossible to put down.

I finished, ordered the next book, and fumed that McElwain is with traditional publishing. Which means if I like Book 2 as much as Book 1, then I have to wait most of a year for Book 3, if they even contract for it. 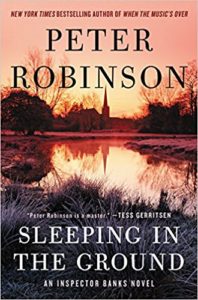 Robinson, Peter, Sleeping in The Ground, William Morrow, 2017. Robinson is one of the masters of the genre. He can be uneven, but even his worst novels are better than most writers’ best novels. In this case, he takes a horrific crime, and solves it in the center of the book. Then we keep going. I read this thing in almost one sitting. I would recommend that you do not read the blurbs about the book, because the stupid sales people added spoilers. (Seriously? This is why writers are still with traditional publishing? Awful.) Read the book without knowing what it’s about. If you love mysteries, you’ll love this one.

Sanderson, Brandon, “Firstborn,” Galactic Empires, edited by Neil Clarke, Night Shade Books, 2017. I have read a few Brandon Sanderson short stories, but nothing that made me want to read his novels, until now. This story, about a younger son who has to live up to his brother’s accomplishments, has a lot of resonance. Every genre has stories about that relationship, but Sanderson ends up using some powerful science fiction tools to make the story even stronger.

The story is pure space opera with a lot of action, and a lot of humanity. I could not put this story down at all. Excellent.

I don’t know if the story is set in one of his series. I’ll have to find out. 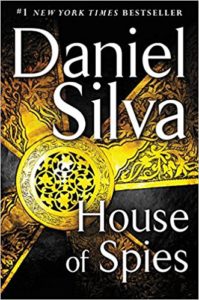 Silva, Daniel, House of Spies, Harper, 2017. Silva’s writing always gets me, even if I sometimes find the books farfetched. This one, featuring his spy Gabriel Allon, is probably farfetched too, but I didn’t think about it. The book grabbed me from the opening, and held me all the way to the end. At one point, I even talked out loud to it, muttering, “Oh, no. Don’t do that.” And of course, they did. Truly superb. One of the best in a good series, which is saying something.