Writers And Snot-Nosed Aliens, Among Other Things

Writers And Snot-Nosed Aliens, Among Other Things

I mentioned a few posts back that I would have a lot of news this fall. And I do. It stuns me. 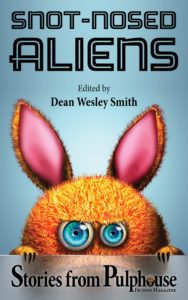 First, let me thank all the people who have supported the Pulphouse Kickstarter so far. As I write this, we’ve hit two of our stretch goals and are halfway to the third. The first stretch goal guaranteed an extra electronic issue of the magazine for every supporter, and the second stretch goal allows us to publish Snot-Nosed Aliens: Stories From Pulphouse Fiction Magazine. Allyson Longueira was so excited about hitting that goal that she designed a cover for the volume.

I gotta tell you: I love that cover.

While she was searching for the alien to grace the cover of the volume, she found our mascot. A bit of history: Pulphouse: A Fiction Magazine (the first incarnation) had a little mascot we called Stomper. We were going to revive Stomper when we brought the magazine back, but we couldn’t find the artist to license the image to WMG Publishing. So Allyson found the little guy you now see peering out of the O in Pulphouse.

He was so cute that Gwyneth Gibby put together a 15-second ad featuring him (along with some good old-fashioned Pulphouse attitude).

Those of you who subscribe to Pulphouse will see this little guy everywhere. I think we’ve all fallen in love.

Segueing into more aliens, the Aliens Among Us Storybundle that I mentioned last week continues. You’ll have only four days or so to get ten really nifty science fiction novels featuring aliens. Books by Kevin J. Anderson, Mike Shepherd, Dean, Marcelle Dubé, and six more…including my award-winning The End of The World. You can get all ten books for $15 and donate to AbleGamers.org while you’re there.

Segueing again…I mentioned writers in my title, and I have a lot to share with you folks as well, whether you like aliens or not. First, back to the Pulphouse Kickstarter. Some of our rewards are writer-specific—lectures and online writing classes. Dean offered a special deal to the writers who visit his blog. I figure you folks can piggyback onto that offer. (I know where the guy sleeps…)

Here’s how he describes it:

I just am finishing putting into classic status Genre Structure workshop. I have about five workshops more to get up, bringing the total of Classic Workshops to around ten or eleven by December. With more to follow.

So say if you get three workshop credits through the Pulphouse Kickstarter, you also get three Classic Workshops for free.

And yes, if you took a Classic Workshop when it was a regular and want to look at it again, just write me and I’ll tell you how to get into the workshop.

You can see the lectures and classic workshops at Teachable.com Again, there are five or so Classic Workshops there now, more coming every three days or so. (takes that long to load them.)

I had one question. If you want to get more than three workshop credits through Kickstarter to use at any time in the future, just go to the three workshop reward and pledge more in units of $250.  So say you wanted to buy four, that would be a $1,000 pledge on that $750 level and we will take care of it when all done.

And you would get four classic workshops as well, also taken care of when all finished, not counting the subscription to Pulphouse.

If you’ve been thinking of taking an online lecture or class from us, now’s the time. Go to the Kickstarter and follow his instructions above.

Somehow it became that time of year again. NanoWriMo starts in a little over three weeks. For the past few years, Kevin J. Anderson has put together a Storybundle of writing tips that coincides with NanoWriMo. Every year, I think he can’t top what he did the year before, and every year he does.

I’ll be honest: Sometimes I don’t download the writing bundles. There’s just not much at my career level in them. But this year, there are a number of things that I want and/or need to read. Don’t faint, those of you who know me, but M.L. Humphries books titled Excel For Writers and Excel for Self-Publishers look particularly useful. So does M.J. Carlson’s Hurting Your Characters, which is all about how to handle wounds and injuries in your fiction.

Kev added a Storybundle exclusive: Writing As A Team Sport. Kevin has participated in more successful collaborations than anyone else I know. (Two of those collaborations were with me.) He has all kinds of tricks and advice for the best ways to collaborate. And he should know.

Dean’s book on making the most money out of your writing by understanding copyright—The Magic Bakery—is part of this bundle, as is How To Make a Living With Your Writing by Joanna Penn. I contribute a book on how to manage your time effectively and Leah Cutter contributes one on how to stay healthy as a writer. (There are important things to do to remain injury free, for example).

There are also books from Mike Resnick, Sam Knight, Chuck Heintzelman, and C. Michelle Jeffries. Thirteen writing books in all for $15, available until the end of November or so. That might seem like a lot of time, but the way this year is going, it really isn’t.

So…to recap: Aliens, Writers, Deals, Bundles, Kickstarter, The New Stomper, Aliens, Deals, Writers…Oh, you get the idea. I’m sure you’ll find something to either entertain you here or something to help with your writing. Or both.

3 responses to “Writers And Snot-Nosed Aliens, Among Other Things”