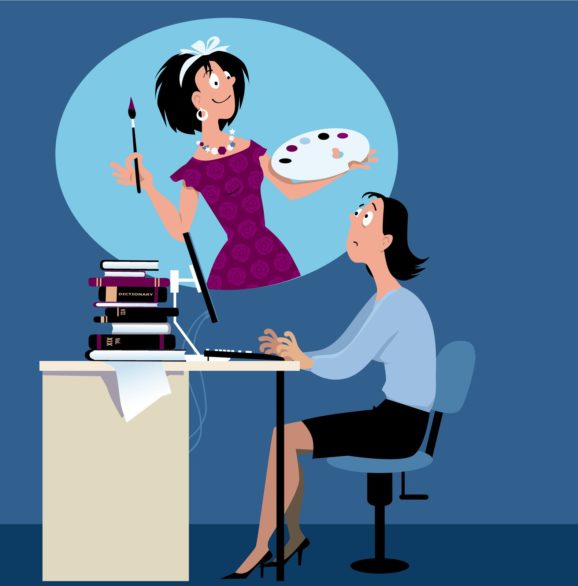 I am not a musician.

I am not an actor.

I am not a politician.

I am not a political campaign director.

I am not a lawyer.

I am not a professor.

I am not an investigative journalist.

I am not the news director of a radio station.

I am not a local TV news anchor.

I am not a national news editor.

I am not many, many things, things I seriously tried. Jobs I actually had (news director, journalist), jobs I was offered and turned down (local TV news anchor, news/interview show producer at WGBH, national news editor at CNN and NPR). I investigated law school, looked at the price of the LSAT exam, and decided not yet. Apparently, I had decided not ever.

Maybe if I had stayed married to my first husband, if he had gone to New York as planned, if he had stayed in the theater as planned, I would have tried my hand at being a playwright. One of the first things I wrote for a creative writing class in college was a play. I’ve since written a lot of scripts for radio, and some radio dramas. I had that bent. But didn’t have the need.

If you had met me in high school, you might have thought I was going to be a musician. I played more than a dozen instruments and was always doing something musical, not just for the school, but for other amateur groups.

In my first year of college, I walked to the door of the music school, saw the audition requirement, and walked away. In my third year at a different university, I walked past the music school every day, saw the signs go up for new auditions for a dozen things, thought about it, and never showed up.

Opportunities abounded. They always abound. Sometimes you try things. Sometimes you fail at them. I didn’t go to the auditions because I froze at an audition in high school. My voice came out squeaky and terrified, and then it broke. I said to the music director of the musical I was auditioning for, I’m sorry. I was nervous. Can I try again?

And she said, No. You’ll be nervous on stage. This gives us a good indication of how you sing when you’re scared.

And that was that. For music. Period. I was nervous. I couldn’t do it. No help, no love, no it’s normal to be nervous. No teaching me how to overcome nervousness.

But here’s the key: I didn’t seek help either. I later learned that major performers, big, big, big names in the music industry, still get stage fright. Many of them vomit at least once before going on stage.

They wanted the career. Music and performance mattered to them more than nerves, than comfort, than not vomiting every day.

I didn’t—I still don’t—want to be a musician that badly. I never did, or I would have practiced with joy and gusto instead of with the attitude that each repetition of a line was the same as cleaning the dog poop out of the yard.

As for being a journalist, I was a broadcast journalist, with small success in a small city. At a point in my life when I could have torn up roots and moved to Atlanta (for the job offer from CNN) or to Boston (for the 90% guaranteed job from WGBH through an old colleague), I didn’t. In fact, I moved to the opposite coast.

You see, I was burned out. I didn’t want to write about what other people did. I wanted to make things up, and write fiction. All the time.

So I rearranged my life to make writing fiction possible.

It sounds so easy now, but it was the equivalent of vomiting from stage fright before every show. The upheaval, the changes, the hard work, the voluntary poverty—all of that was worthwhile to me to become a full-time fiction writer.

And once I achieved that goal, I stayed.

That’s the other thing.

A lot of people quit a dream profession when the going gets hard.

Even more people quit that dream profession after a bit of success.

But in journalism, I had worked my way to the top of the local heap in news. I was the news director at one of two major news radio stations in my small city. I was getting job offers from all over (Seattle, too, which I dismissed because the guy who offered it {and the person I had replaced in the job} was a Harvey Weinstein type). I was entering the national stage at the right age, with the right credentials, at a time when the field was growing.

I looked at all of that, saw a career filled with endless nights of reporting and running around and verifying and scrambling to make sure that hour’s newscast was on time…and I fled. I quit the business and didn’t look back (except in the occasional short story).

Why am I telling you all of this?

Because of the emails and comments I received on my burnout post of two weeks ago. Many of them are heartbreaking. So many of you are done. You hated the writing career. You hated the small measure of success that you had. You hated all of the things you had to do to gain that success.

It’s okay to let go of the dream of being a full-time writer even if you’re really good at it.

It’s okay to give up writing for good if you don’t enjoy it.

You’ve given it a great run. You don’t like it.

That’s a great thing to learn. Time to find something you’re willing to make those sacrifices for, something that might burn you out just as badly, but might cause you to figure out how to overcome the burnout rather than let it stop you cold.

If I had burned out as a journalist, I would have quit right then.

I’ve burned out half a dozen times as a fiction writer, and I work on healing, and then getting back into the game.

Because I love writing fiction. I still don’t want to do anything else. It breaks my heart to consider doing something else.

And that’s the key.

If you’re one of the people who wrote to me and said that you aren’t ever going to write again, and your heart breaks a little every single time you say that, then work on healing from the burnout or whatever it is that took the joy away from writing. Then come back to it. Slowly, without making the same mistakes.

But if you can say you’ll never write again, and that phrase fills you with a secret happiness, then respect that. The profession is not for you.

So many people are telling me that they’re leaving writing and taking their indie published books down. Why? There’s no reason to. Just let them sit. At worse, they’ll be forgotten. At best, they’ll earn you some money—a trickle here and a trickle there, or maybe someone finds one of your books, loves it, and then decides to make a movie or a game or a comic book out of it. You’ll make more than a trickle in that case.

If you were traditionally published, your book would still be in print. Leave your indie books in print as well.

Just move on to that next profession, the one that makes you happy.

It’s also okay to fail at them.

It’s okay to succeed at something and decide that the something you succeeded at is not for you.

You might not be a person who writes books.

Do what’s best for you—and make sure whatever that is will give you joy in all the years to come.

Sometimes your responses to my posts inspire other posts. That’s the case with this one. Some of you broke my heart when you wrote to me. I’ve been in your shoes. And while I make it sound easy to change course, it isn’t. It takes a lot of reflection and courage.

If you want to support the blog on a regular basis, I have a Patreon page which gives you the occasional perk.

Thank you all, for the comments, the support, and the ideas. I wish you all the best, no matter what you chose to do.

“Business Musings: Quitting,” copyright © 2017 by Kristine Kathryn Rusch. Image at the top of the blog © Can Stock Photo / Aleutie.