My special holiday reading continued until December 18 when, to my surprise, I found I couldn’t read yet another story about any holiday ever, thank you very much. I even switched to very bloody mystery stories (with a holiday theme) and that didn’t even work. So I wandered around, lost, for a day or so, and then decided I could stop reading holiday stories and go back to other reading.

It wasn’t that I was reading bad holiday stories. I think I just got to the point where a steady diet of ice cream grew a bit tiresome, even for the kid with the massive sweet tooth.

Then I moved on to other things. Tried to find a good bloody mystery in my stash, but I had already read them. So, I read some short stories, mostly from the magazines, and they were good, but not memorable. I drifted back to two holiday stories, loved one of them, and then, after the holiday, Alyssa Cole’s book showed up, and I devoured it. Great stuff.

So, here are the writings I liked in December, some holiday, some not. 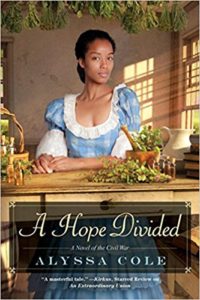 Cole, Alyssa, A Hope Divided, Kensington, 2017. The final book that I finished in 2017 was Alyssa Cole’s A Hope Divided. So nice to go out of the year reading something excellent.

A Hope Divided is part of Cole’s Loyalty League historical romance series. Set in South in the Civil War, it does what it can to redress the Glorious Old South myths posited by old Civil War romances. Her heroine in this novel, Marlie Lynch, is an accepted part of the wealthy slave-owning Lynch family. She’s the child of a white Lynch and a former slave (who got her freedom when she got pregnant), but Sarah Lynch is an abolitionist, and wants the family to accept Marlie–which they mostly do.  Until…the war, the home guard, and Steven Lynch shows up with his horrid wife Melody. Then Marlie becomes a prisoner in her own house.

But she’s not the only prisoner. Ewan tried to escape a nearby prisoner-of-war camp, only to injure himself and end up hiding in the house. The house is part of the Underground Railroad, so they’re used to hiding people, but not for this long, and not someone white.

The conflicts grow, and unlike most historical romances (particularly Regencies), the conflicts are real, with life and death stakes for everyone. I couldn’t put this book down. I hope that Cole writes more in the series. I would have preordered the next one. I looooove these books.

Hainey, Michael,“The Natural,” Esquire, October, 2017. An interview with Robert Redford. The entire issue has short little “what I learned” things from a variety of people, but this article went long. I’ve been a Redford fan my whole life and didn’t know a lot of this, such as his relationship with his father (awful) and the fact that things from his past still have an impact on him. No one’s life is perfect, of course, and he’s at an age where he can see the links between what happened to him as a kid and who he has become. Really worth reading.

Kelly, Scott,“What I Learned In Space,” AARP Magazine, October/November 2017. This is an excerpt from Kelly’s book, which I should really pick up. A lot of good stuff here, but this is my favorite quote: “I’ve learned that grass smells great, and wind feels amazing and rain is a miracle. I will try to remember how magical these things are for the rest of my life.” Read this, and get a small sense of his adventure. 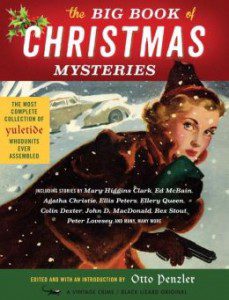 Penzler, Otto, The Big Book of Christmas Mysteries, Vintage Crime, 2013. It took me four holiday seasons to finish this book, not because it was a slog to read, but because there were so many stories. And they were mostly to my taste. I think I skipped maybe three of them completely. The book is nearly 700 pages long, and the pages are in columns, so it probably would have been 1400 to 1500 pages long if the design was different.

Usually I complain about how the best American series is laid out, and Otto is the series editor for the mystery volume. But he has no say in the editorial layout: that’s clearly mandated by the publisher. All of Otto’s other anthologies have narrative flow.

I was disappointed to come to the end of the book. I had been at reading it for so long that it had become a holiday tradition for me. Unfortunately, I have a great memory for stories, and I rarely read any twice. Otherwise, I would start all over again next year. Great volume. Lots of fun. Pick it up. 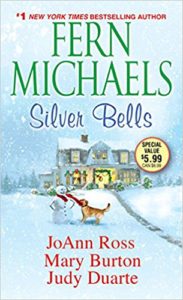 Ross, JoAnn, “Dear Santa,” Silver Bells anthology with Fern Michaels, Mary Burton, and Judy Duarte, Kensington Reissue 2017. I found this volume in a discount store. Originally, the book came out in 2008, but apparently, it’s been reissued. I was getting pretty burned out on Christmas stories by the time I picked this up. The only reason I started JoAnn’s story is because I like her work and because it was about a mystery writer. The writer’s name is Holly Berry, and there’s an actual reason for that. Not a funny reason. A sad and heartwarming one.

Anyway, Holly gets caught in a snow storm in the mountains and sees a reindeer cross her path (Blitzen?). Then she crashes her SUV. Of course, she’s rescued by a hunk of a man who also happens to have the world’s cutest daughter. He’s mayor of the most Christmassy town in the United States, and owns an inn. And in the context of the story, all of this is believable. And wonderful. And charming.

And…and…I cried at the end. Not a delicate little tear running down the side of my face, no. A gasp-y sobby kind of crying that only a few authors have achieved for me in the past—at least with something sweet. So pick up a copy of this book. The paperback is super cheap right now, so if you prefer that format, it’s cheaper than the ebook. 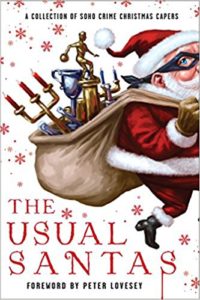 The Usual Santas, no editor listed, Soho Crime, 2017. I loved this book and gave it to a number of Christmas-story loving friends. It’s beautifully designed, with lots of great extras inside. Visual extras. And there’s no editor listed, which pisses me off because clearly, someone edited this book, and put a lot of thought into it. The someone divided the stories by type (“acts of kindness”; “the darkest of holiday noir”) and put together a pleasing order of wonderful authors. This is a spectacular little book, worth every moment you spend with it.