I’d like to say I had no time for leisure reading this month, and while that’s mostly true, it doesn’t feel true. I spent most of the month reading for the anthology workshop. 1.2 million words of really great fiction, some of which will appear in upcoming Fiction Rivers. I mentioned the Justice issue of Fiction River last month. This month, I line-edited another Fiction River, as well as doing all the reading. And Fiction River‘s authors got more accolades, being on some best-of-the-year lists, and in one case (Dave Hendrickson’s “Death in the Serengeti” from Pulse Pounders: Adrenaline, making a best-of-year volume. That’ll be in Best American Mysteries in the fall.)

Those stories are amazing. I’m not yet sure (as I write this) which ones will end up in Fiction River, but a lot of them will. Some are so stunning, I’m still thinking about them days later. We’ve been having great discussions about the meaning and importance of fiction—at least among the editors—so that’s fun too.

But, me being me, I managed to squeeze in some non-work reading. And that’s been enjoyable. It’s nice to have some things to recommend this month, things I can tell you about in real time. 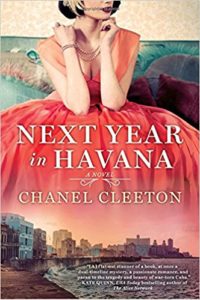 Cleeton, Chanel, Next Year in Havana, Berkeley, 2018. I had read an early review of this book, and preordered it, even though I had never heard of the author. I then forgot I had done that. The book arrived just after my dismal reading month in January, and I started this book with trepidation. And, oh, my. What a wonderful, wonderful novel. It follows the stories of two women—one in 1958 and the other now—as they fall in love for the first time. Only really, the book is about Cuba. Cuba as it was before the revolution, Cuba during the revolution, and Cuba now. Cleeton handles these disparate worlds beautifully. I learned a lot about Cuba that I didn’t know, and it didn’t feel like a  history lesson at all. It felt organic and wonderful. I ended up in tears at the end—in a good way. I loved this book. I think you will too.

Garner, Dwight,“Packed, Stacked, and Jacked,” Esquire, December 2017/January 2018. A lovely short essay on moving to a city after “child-enforced exile in the suburbs.” The voice is lovely here, the sentiment strong, and one part of the essay (which is partly about books and downsizing) made me laugh out loud. I identified much too much with this essay.

Le Guin, Ursula K., “Books of My Life,” Entertainment Weekly, December 8, 2017. So the week I wrote a blog post about losing my mentors, I was reading a back issue of Entertainment Weekly, and came across Ursula’s lovely face. EW had interviewed her as part of a piece that went with the release of her latest book of essays. The interview is wonderful. It’s about books and I can actually hear her voice as I read it (and reread it). I love the list of things she has to read next, and I wonder if she got to them.

I so want to be working as hard and with as much joy as she did up to the end. She was in her eighties and still contributing in a meaningful way to the dialogue around us.

The only thing that made me sad (aside from her loss) is the fact that she admits to burning one of her early novels. No! I liked that version of Le Guin too. Her early works had a romance that the later ones did not. Both were valuable to me as a reader and I mourn the loss of that early novel—although not as much as I mourn the loss of Ursula, whom I will forever miss.