So much fantastic reading in April, and no time to write it all up. That’s why this is a few days later than usual.

First, I line-edited an issue of Fiction River, Spies, which is just marvelous. I had forgotten how good those stories are. You’ll see them next 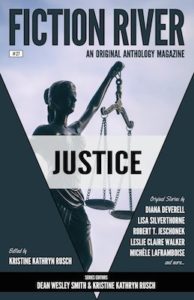 year, but for now, you can read a Fiction River that I edited, Justice. The stories in that volume are very powerful.

Then I did all the reading for the Fantasy workshop. Wow, those writers came up with some unbelievably good stories. I’m hoping the writers mail the stories (without doing much more than fixing nits!!!) and editors are smart enough to buy them. Excellent, excellent work.

I also had to finish the overall reading for that workshop. We’re always working off the same books, so I managed to finish the ones I assigned a few days before the workshop started. I mentioned some of those last month. I was pretty disappointed with the latter volumes I had assigned (the ones I hadn’t read), including a highly acclaimed and exceptionally dull first in a trilogy by a writer whose work I usually love. (Only one person in the workshop even made it through that novel. Ooops. It might have the critics talking, but the actual readers [based on a small sample] loathed the book.)

Adler, Kayla Webley, and Eric Sullivan, “Sex, Lies, and Human Resources,” Esquire, March 2018. Kudos to Esquire and Marie Claire. As the #MeToo Movement gained momentum, both editors (Jay Fielden and Anne Fulenwider) got together to do a fantastic series of short essays answering the questions that everyone has been asking. Questions from “how do men talk to women” to “why the heck haven’t men noticed this before” and so very much more.

The essays aren’t really essays in the conventional sense. They’re more like 250 long email answers, written by everyone from Gabrielle Union-Wade to Terry Crewes. There’s advice on how to report harassment, how to get help if you think you’re a harasser, and more. I’m only going to isolate one of the essays (below), but really, read this. It’s a real-time thought experiment on how our world is changing, done in a very above-board manner.

Black, Holly, “1Up” The Year’s Best Dark Fantasy & Horror, edited by Paula Guran, Prime 2016. Every year, I assign a year’s best in the fictional genre that I’m currently teaching. I prefer Paula Guran’s fantasy volumes, partly because they’re fantasy and not sf, but also because my tastes align with hers. I’m not recommending the entire volume this year, because some stories were too graphic for me. But the good stories are stunning.

Holly Black’s story is a gaming story about the funeral of a young man whom his friends never met in the real world. They’d only met in the world of online gaming. And he left them with a conundrum, a rather horrible one. Black combines fantasy, gaming, and mystery into a strong story that’s unforgettable.

Cole, Alyssa, A Princess in Theory, Avon Books, 2018. If you have followed this list over the years, you know I have a weakness for hidden identity stories. And this is one, which, to my surprise, didn 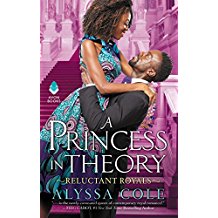 ‘t follow the usual script. Naledi Smith is in graduate school in epedimeology, and she keeps getting annoying emails telling her she’s a princess. She blocks them, until one frustrating day when she tells whoever is sending them (because they’re clearly not form letters) to Fuck. Off.

Instead, that response sets a series of events into motion. Seems she really is a princess, and betrothed to an African prince. (They had a betrothal ceremony as toddlers.) For some reason unbeknownst to her and to the royals in that made-up country, her parents sneak away in the middle of the night, never to return. Everyone in the country hates them, hates her, thinks she betrayed them…when instead, she was orphaned and put into the foster care system as a child so young she only knew her first name.

What really happened gets revealed, of course, but only after all kinds of unbelievable twists and turns which Cole makes absolutely compelling. I loved this book and blew through it in a day or so, which, considering how tired I was, is just astonishing. 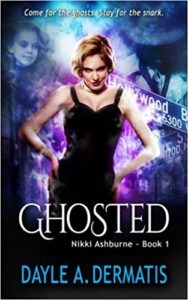 Dermatis, Dayle A., Ghosted, Soul’s Road Press, 2018. I nagged Dayle to write this book for years. And I have to say, that when you’ve anticipated a book for years, sometimes that book disappoints. Ghosted did not disappoint. I loved it.

We’ve published some of Dayle’s Nikki Ashburne stories in Fiction River, and Dayle has sold a few elsewhere, but this is Nikki’s first novel. Nikki, a former celebutante, sees ghosts. Her near-death at a Hollywood party changed her life for the better in some ways. But she’s still dealing with being a minor celebrity and losing her “friends” and gaining non-corporeal friends. It’s a great set-up, and Dayle writes with a strong, powerful, fun voice. I blew through the book when I really should’ve been reading something else. Now, I want the next one…

Entertainment Weekly, The Oscar Edition, Feb 23-Mar 2, 2018. Yeah, yeah, yeah. I told you I’m behind in my reading. I read this edition mid-April. There are so many good articles here that it’s impossible to choose a few to highlight. So pick up the issue. It’s subtitle is The Greatest Untold Stories of Hollywood’s Biggest Night. Many of the stories are told, but they were told in ways that either diminished them or diminished their impact. Reading these histories together brought them to life. They also made me realize, sadly, how little has changed on the discrimination front in the past ninety years. Sigh. If you can lay your hands on this issue, do so.

Gay, Roxane, “Can I Enjoy The Art But Denounce The Artist?” , Esquire, March, 2018. This is one of the series of Esquire short essays that I mentioned above in the “Sex, Lies, and Human Resources” segment. Roxane Gay’s timely essay mostly focuses on Bill Cosby (and as I write this, he was found guilty. Yay! Although that doesn’t make up for the dozens (hundreds?) of lives he destroyed), but it does ask a very, very important question. Her answer, in the last paragraph, is deeply satisfying, and worth the time to look this up.

Grant, Adam, “Queen of the Hill,”, Esquire, March 2018. Grant interviews Olympian Lindsey Vonn. I wrote about this piece in one of my Thursday blog posts. There’s a lot to unpack in this short interview, mostly about how you continue in the face of adversity. Read this one, if you’re have a tough year.

Jacobs, Laura, “Wonder Boys,”, Vanity Fair, February, 2018. A fascinating article on the collaboration between Leonard Bernstein and Jerome Robbins. I had known that the men worked together on West Side Story, but I hadn’t realized how the collaboration worked or how deep their relationship went. If you’re an artist, you’ll want to,  read this one. If you’re a Broadway fan, you’ll want to read it. Heck, just read it.

McDermott, Kirstyn, “Mary, Mary,” The Year’s Best Dark Fantasy & Horror, edited by Paula Guran, Prime 2016. An amazing story about the death (and life) of Mary Wollstonecraft. Most people know her as the mother of Mary Shelley, but she was so much more. One of the most important writers of the Enlightenment, she died in childbirth, much too young. The story wraps around both women, and the man who united them, William Godwin. I suspect the story works better if you know a little about Mary Wollstonecraft, but even if you don’t, this is a strong piece.

McGuire, Seanan, “There is No Place for Sorrow in the Kingdom of the Cold,” The Year’s Best Dark Fantasy & Horror, edited by Paula Guran, Prime 2016. I usually don’t like doll stories. I find dolls creepy anyway, and most people simply write their own version of Chucky. But Seanan McGuire created an entire world in this short story. The worldbuilding is phenomenal, and the story itself is heartbreaking. I loved this story, and thought it one of the most memorable stories I read this year.

Slatter, Angela, “Ripper,”  The Year’s Best Dark Fantasy & Horror, edited by Paula Guran, Prime 2016. I cannot convey to you how annoyed I was when I started this story. Especially when I realized it was a novella. I read both mystery and fantasy, and Jack The Ripper stories are staples of both genres. And usually really, really, really, really dull.

So I saw the title, read the opening few lines, and damn near skipped to the next story. In fact, I closed the trade paper volume I was reading, saw Paula Guran’s name, and realized she’s read as many Jack The Ripper stories as I have. She thought this one wasn’t just good, but exceptional. And since I trust her taste, I went back and read.

And am I glad I did. About 1,000 words in, there is this incredible, breathtaking character shift. I won’t ruin it for you, but oh, my, that made the entire story fresh and new and scary and original, and well worth all the retail space it took in the volume. This one is worth the price of admission. I don’t easily enjoy Ripper stories, and I couldn’t put this one down.