Fascinating reading month for me. It includes some big name writers who lived up to their brands and some lesser known writers as well. I’m finally getting into a rhythm here in Vegas, and that pleases me. (Please note that I use Amazon links because I’m lazy, not as a major recommendation.)

I’ve also been line-editing Fiction River: Feel The Love, so I’ve been enjoying some stories that I first read a while ago. You’ll get that volume later in the year, but right now, you can read Fiction River: Wishes, edited by Rebecca Moesta.

In the middle of the month, my reading veered sideways. Dean and I unpacked a bunch of my books, including a famous novel that was published in 1976. I hadn’t ever read the book. As a stubborn sixteen-year-old, I refused because everyone told me the book was brilliant. Then the day I unpacked my ancient copy, an article I was reading also recommended the book. It was only 276 pages, so I thought what the heck.

I wasn’t all that impressed. Some of that I blame on the 40-year gap. The book might have had a lot of imitators that I read. (I call that the Citizen Kane problem, since every film after as influenced by Kane, so that when I saw it, I was singularly unimpressed.) However, I wasn’t being critical because in the middle of that, I saw the Broadway touring company of Hamilton. That musical lived up to every bit of the two-year hype plus some. Really worth seeing over and over again.

The “classic,” though. The classic dealt with class issues and was quite sensitive to them. I was intrigued by that until I got to the gratuitous racism smack in the center of the book. Totally unnecessary, just a passing conversation, but by then, the sour taste was firmly in my mouth. I scanned to the end, and tossed the book into the recycling. Not worth the forty year wait by any stretch. I doubt I would have enjoyed it as a sixteen-year-old either, but I might simply be giving myself too much credit.

I followed that book up with a brand new book by an author whose short stories intrigued me in December. That book was great in the beginning. Then I figured out the twist. I was still going to recommend it, until I got to the ending, which was…just plain nasty. Mean-spirited, pointless and nasty. Not really what I needed in June as families were getting separated at the border, the news was filled with crying children and useless idiot politicians, and just plain old despair. As I write this, I’m reading a romantic suspense novel set in the 1930s. We’ll see how that goes.

Here are my successful reads from June, all of which I can highly recommend. 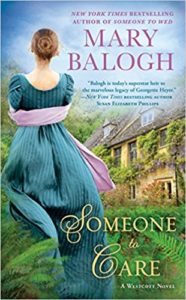 Balogh, Mary, Someone To Care, Berkeley, 2018. I actually read this book in May, but forgot to write it up. The Recommended Reading List for May went live without me taking the time to check it. Dean and I spent the weekend that I would have been working on the list moving a U-Haul’s worth of books into the condo. I was a bit too tired to log on and fix the website.

This is book 4 in the Westcott series. It deals with the woman most hurt by the scandal, the former Countess of Riverdale. She had thought she was married to the Earl of Riverdale, but she discovered when he died that he had left a wife–a woman he had married before her–and that wife (although dead) had had a daughter, who inherited everything. (That was the first book.) The former countess lost her entire identity, and her children went from being at the top of society to being considered bastards. The series is fascinating as a whole, with the first book still the strongest. But this is a close second.

Viola Kingsley went into seclusion and acts like she’s fine. She really did dislike her (fake) husband, but the marriage had been arranged, and such feelings weren’t unusual. Then he died, and left the mess, and she dealt with it. On a journey to see one of her children, she stopped at an inn and met a man she had fallen for before she married the earl (or thought she had). She and the man have an affair, because neither of them have reputations to destroy. Only a few things go wrong, the first being, of course, that they fall in love…

I loved this book and read it in a single night. Recommended–but start with the first book in the series (which I also recommended). 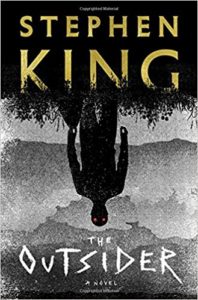 Scribners, 2018. It’s no secret that I’m a big Stephen King fan. I learn something from his storytelling every time I read his work, and this book was no exception. What he does with point of view! Oh, my heavens.

Anyway, because I love his stuff, I put up with things like murdered children right at the start. And a little boy gets murdered horribly at the beginning of this novel, and other children die, and I…couldn’t put the damn thing down. Tension, suspense, and some familiar characters from Mr. Mercedes made this book a fast read for me. Highly recommended. 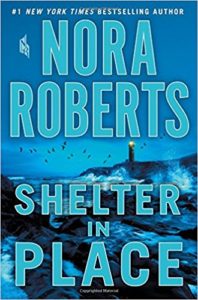 Roberts, Nora, Shelter in Place, St. Martins Press, 2018. Yeah, yeah. I said I was done with Nora Roberts. But I have loved her work for decades. And as I was putting all my favorite books on my shelves here in Vegas, I remembered how much I loved her stuff. I had also noticed (in passing) that the reader reviews of this book were hugely mixed. Some of the early reviews were awful. I mean scathing, nasty, the worst reviews of her work I’d ever seen. “Not what I want from Nora Roberts.” “All there is is blood.” I’m paraphrasing, but seriously. Bad reviews.

None of that was really on my mind when I went to the grocery store in early June. But there was Nora’s book, and all of that surfaced. I picked it up, read the description, and saw no mention of romance at all. And that’s when I realized that she had been with St. Martins long enough to clear her palate of the abuse she had received from the horrid management at Randy Penguin. (They drove her out of the company–their biggest earner. What idiots. They were trying to control what she wrote, for god’s sake.)

I had a hunch that her lackluster prose might have come from her attempt to soldier on in the face of all of that pressure on her writing. Or at least, I hoped so.

I read the opening, got hooked, and bought the book. Lo and behold, it’s up to her old 1980s standard. The one that made me so angry I threw a book across a restaurant. Then crossed the restaurant, apologized to the little old lady I’d nearly hit, picked up the book, and continued reading. (Roberts had murdered a toddler, which I DID NOT WANT in my relaxation reading. But I remained a fan, and I’ve never forgotten that book.) She used to surprise and entertain and write something romantic. Shelter in Place is precisely that kind of book.

I loved it. I can recommend it without reservation. (No children or dogs die in this one…at least, not in an obvious fashion. She hints that kids die, though.) If you want an escape from all the horribleness in the news, however, this is not the book for you. But if you want a good read, pick this one up.