I turned off the TV much of the month, and decreased my consumption of news, out of necessity. I can’t watch the images of my country doing things I so deeply hate. I do read about these things on my phone (thank heavens for notifications!) so I’m not uninformed. I’m just not losing myself in the imagery, which is probably good for my mental health.

I am watching local news, though, so that I learn the city. Fascinating stuff. Combine that with the newspapers and the free magazines, and I feel like I’ve entered a new world.

Regarding reading, July started out well. A great paperback that I can’t quite catagorize, a non-fiction book, and more. By the middle of the month, the goodness continued. Some new writers, some favorite writers, and more books than I can read.

My magazine reading is a bit frustrating, though. Runner’s World got sold twice. The first new owners hired a new editor who was just getting her feet under her when the second new owners forced her out. The latest editions of the magazine are basically advertising copy for a bunch of crap. I’m hoping that the magazine will return, but it might be a vain hope.

And I finally had to proactively cancel my Vanity Fair subscription. I can’t read the magazine. Literally. They send me perfume-filled paper copies (even thought I’m signed up for perfume-free) and we can’t get my log-in to work for the digital edition. So that’s now gone as well. A lot of local Las Vegas magazines do fill in my non-fiction reading (as well as isolated articles online) but they don’t have the wide appeal that Runner’s World and Vanity Fair did.

And here is the best of what I read. 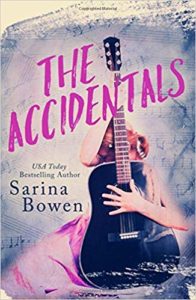 Bowen, Sarina, The Accidentals, Tuxbury Publishing LLC, 2018. I’ve loved Bowen’s hockey and Ivy Years series, but the moment I saw The Accidentals, I had to set my current reading aside. I enjoy Bowen’s writing, and she’s dealing with one of my favorite tropes—rock stars. Only this isn’t a rock star romance. It’s a New Adult novel about a girl who meets her rock star dad for the first time.

This isn’t a hearts-and-flowers meeting. Rachel was raised by her mother, who got pregnant at nineteen by Freddy Ricks, who was on the cusp of becoming favorite. Freddy (or Frederick, as he’s known in the novel) sent money for seventeen years, but never tried to meet his daughter. However, when her mother steps up, Frederick steps in, and takes custody of Rachel until she turns eighteen.

The book is a mishmash of subgenres. The rock star novel, the New Adult novel, the coming of age novel, and the young love novel. It’s amazing what Bowen manages to cram into 319 pages. She also somehow keeps Frederick from seeming like too much of an asshole, which is amazing, since he is an asshole (or asshat, in the terms of the novel). Of course, Mom doesn’t come out well, and in some ways, neither does Rachel. (She treats an old friend poorly, for understandable reasons.) The characters are all too human, which makes the book relatable.

I loved it, even though it could have gone on, and I ended up with a few but-but-but questions. I didn’t mind. I think I was having one of those I don’t want to leave this novel moments, rather than this novel is flawed moments. Read it. You’ll see. 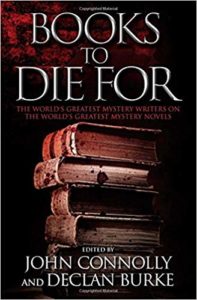 Connolly, John, and Burke, Declan, editors, Books To Die For, Atria, 2012. I’ve had this book on my shelf forever, and I forgot why I bought it. I somehow thought it was an analysis of books, which was not what I wanted to read, ever. Instead, it’s a series of essays from mystery writers about the books they consider to be the best or the most essential mystery novels. When we moved, I rediscovered this book and read the blurb, trying to decide if I should keep it. And of course, I needed to keep it. In fact, it was a good slow read during the transition.

At first, I thought I would single out essays that really struck me, but there are too many of them. The book is organized chronologically by the recommended books, so the book begins with Poe and ends with Mark Gimenez, whom I’ve never heard of. Books To Die For was originally published in Great Britain, and has a classy worldly side. A lot of the essays are by famous mystery writers from countries outside of the English-speaking world. Many of those essays are in translation. They’re fascinating, especially since some of them cite English-language classics read in translation.

There are a million tidbits in here about writing, about reading, about books you didn’t know you needed to read. I pulled some out of my library during the move. Read a few too (the one I railed against in June, because I hadn’t expected the racism from the mid-1970s, especially since writers still recommend that title without the warning). I read the Tartt below because of this book. There will be others as well.

Dip into this. You’ll discover all kinds of books to add to your TBR pile, as well as learn a lot about writers, reading, and the history of the mystery genre worldwide. 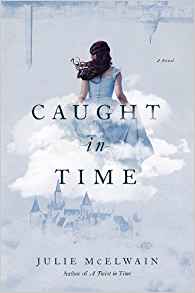 McElwain, Julie, Caught in Time, Pegasus, 2018. I almost didn’t recommend this book. It’s the third in a fascinating multigenre series in which an FBI agent finds herself in the Regency period. Only it’s the Regency period of Regency romance, not the real Regency period, no matter how many Luddites show up.

The first two books were tied pretty closely together. This one felt, for much of its 455 pages, like what the series was going to settle into: Our heroine, Kendra Donovan, would solve crimes in the 19th century, and never return to the 21st century. She would constantly be reminded that she had no rights in 19th century England, and she would struggle against the time period. That would make it all better than the average read, but not as exciting as the early books.

It didn’t help that the reason for the murders was so obvious that our heroine looked stupid for not figuring it out because I knew it by page 100. Turns out she did know it, but had declined to say anything until she could. Since we were in her head much of the time, it would have been nice to know that she knew.

Which would have made the ending—and I won’t reveal that—even more fun. The ending does make the book.

If I had been telling this story, or even if I had been editing it, I would have urged McElwain to break out of chronological storytelling. The book would’ve been better served with a slightly different structure.

Before I hit the ending, which made the book stand out for me, I had decided to recommend the book anyway. There are very few multigenre books, especially published by traditional publishers, and this series needs support for that alone. The fact that it seems like McElwain has an actual plan helps even more, but makes me worried that her publisher won’t support her through the difficulties of middle books.

So, read the first two books before reading this one. You’ll enjoy it. It’s more of an episode of a continuing series than a standalone book, but still worth reading. 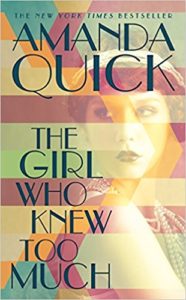 Quick, Amanda, The Girl Who Knew Too Much, Berkeley, 2018. This is a lovely hybrid book that’s right up my alley. It’s not quite romantic suspense. Not quite suspense with romantic elements. A little too loosey-goosey on the details to be a real historical novel (with suspense and romantic elements). It is, as the title suggests, a pretty good novel form of a 1930s/1940s film.

Reporter Irene Glasson, on the run from a murder she’s being blamed for but didn’t commit, stumbles on yet another body shortly after arriving in California. The second dead body belongs to an actress who might’ve been sleeping with an actor, both of whom were staying at a hotel in a small town not that far from Hollywood. There are gangsters and thieves and great cars and even a magician. The book works. I couldn’t put it down. The next one is on order, so we’ll see if she can pull this series off as a series. But the first book is a great deal of fun. 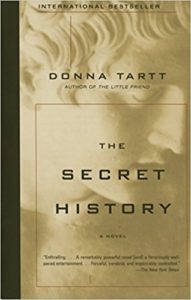 Tartt, Donna, The Secret History, Vintage, 1992.  In reading Books To Die For, Tana French wrote compellingly about what she loved about The Secret History. For the very first time, that book, which I had heard about before it was published, actually sounded interesting to me. In fact, it sounded like a book I would love.

Yep. It is. I love a thick beautiful read about academia and all things literary. Add a few murders and some other unsavory activities, and the book just wrapped itself around my little finger, and demanded that I finish each word.

According to Amazon, I’m one of the few people who bought The Goldfinch on my Kindle and actually finished the book. (I hate that Amazon can get those statistics.) I loved that book and recommended it in the reading list that year. I found Tartt’s work in that novel Dickensian.

The Secret History centers around a group of students who are in a special classics program at a small college. The program has one of those self-absorbed guru professors, and the students themselves are less than a sum of their parts. Tartt went to college about the same time I did, and every detail in this book reflects that. My first-year college experience at a small mini-Ivy in the Midwest was quite similar to the experiences the students have here—without the murders, of course. I laughed out loud at the Burger King crown sequence, because the exact same thing happened in my dorm right around the same time.

Somehow this book feels alive, and the events described herein inevitable. I loved that about the book. In fact, I loved the book. I’m glad I finally read it. And I’m glad I read it as an older reader. When the book came out, I was editing The Magazine of Fantasy & Science Fiction and having trouble with my critical voice being on too high. I don’t think I would have enjoyed the book as much back then.

One final note: I just looked up the book on Amazon (yes, I use Amazon links, but only because I’m lazy) and noted that the paperback is $6 and the ebook is $14.99. For a 26-year-old novel. Gotta love traditional publishing.