Business Musings: Writers And The Hamster Wheel Of Doom

Business Musings: Writers And The Hamster Wheel Of Doom 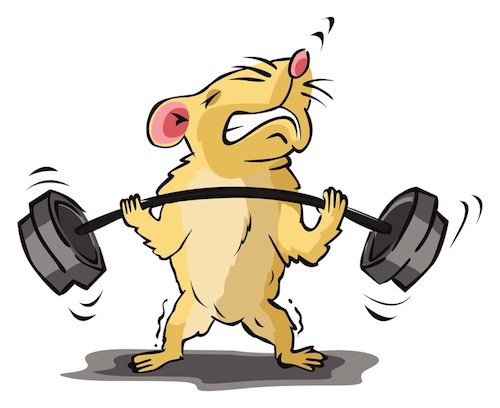 One of my hobbies is trying to figure out what motivates other people. Sometimes they tell you. Often, they do not. I’m most curious about successful artists. Because, if they handle their money well, they don’t have to work again.

(Yes, yes, I know, artists and their money are easily parted. Let’s ignore that aphorism, and only look at artists with money in the bank.)

Despite the success, writer after writer, musician after musician, painter after painter, actor after actor, all keep working, all keep practicing their art.

As far as I can tell, what motivates them is the same thing that got them started as an artist—the desire to play, to enjoy their art, to give their life to whatever it is that they do.

I’m talking about anyone in the arts, but from here forward, I’m going to discuss this as it pertains to writers because 1) writers are what I know and 2) this blog is for writers.

Most writers start out working for free. They take their spare time and write stories or novels or plays. Writers sometimes spend a small fortune learning their craft, often with no hope of financial return because there is this horrid myth that writers can’t make money at their art.

Over time, those writers sell something. They start making money. And writing becomes a job kinda sorta—the source of financial independence, funds, whatever you want to call it.

In the bad old days of traditional-only publishing, a lot of writers ended up writing tie-in novels or doing work for hire or writing ghost novels in addition to their own novels just to make ends meet. Those writers got on what I called the hamster wheel of writing—they wrote to make money, but they weren’t writing their stories. They were writing someone else’s stories.

In those bad old days, some very successful writers were forced onto that same hamster wheel by their publishers who refused to publish anything but the kind of book that made the writer famous. Those writers wrote the same book over and over and over again.

Some writers actually enjoyed that. But not all of them did. The complaints I used to hear from them were awful, and the tales of novels blocked by agents/editors were horrifying.

At a certain point, though, some writers made so much money writing that they weren’t on a hamster wheel at all. They could tell everyone to take their opinions and shove it.

But those writers didn’t and don’t quit, because they love writing, and they love putting their writing out into the world.

I’ve watched these folks with awe, because writing—storytelling—is the core of their being. They write in the same way beginners write—for the love of the task, not because it’s their “day job” or because they have to or because their fans want them to. They write because they love to write, and they get to tell their stories—and really, what’s better than that?

I mention the bad old days of traditional publishing because there was a period of time in the 1980s and 1990s when writers like Nora Roberts and Stephen King had to prove to their publishers that books that were not what the reader expected would sell as well as the books the reader thought they wanted.

Thanks to writers like King and Roberts and Koontz and Grisham and a dozen others, writers who have become mega-bestsellers in the traditional arena can write something other than what’s expected. (Except at Penguin Random House, which is returning to the bad old ways.)

When many of us jumped over to indie publishing for our novels, we got the same kind of freedom. We can publish what we want, when we want, and how we want. If we communicate clearly with our readers, our readers can choose which books to support and which ones they prefer to ignore.

I love that about the new world of publishing—both as a reader and as a writer.

But so many indie writers have built their own hamster wheels and are running faster and faster and faster on them. Even worse, a number of those writers made all of their money following trends, which is the indie equivalent of work for hire and tie-in writing.

Those of you who’ve followed my career from the beginning know that I did a lot of tie-in writing, mostly to repay Pulphouse debt. I kept writing my original novels too, and quit writing tie-ins the moment that our finances evened out.

So I have some experience with the hamster wheel, although I never let it overtake my writing. (Dean did, and has blogged about that.)

If those writers don’t leave the hamster wheel on their own, they will leave involuntarily. At some point, they will burn out. It happens to everyone who works 10 hours per day at a job they loathe.

Most people can find a different job. But writers, their day job was once their dream. When writers burn out on writing, they lose more than a paycheck. They lose something that used to give them joy, something they started doing for free because it was fun.

I feel for them, I really do. And I know most of them won’t be back.

But for those of you still on the hamster wheel with no idea how to stop running in unpleasant circles, let me give you a few tips.

Here they are in no particular order, along with the upside and the downside of each method.

The upside: You’re making a living from writing.

The downside? You’re still on that hamster wheel and you could burn out before you make enough money to jump off.

The upside: You’ll be able to write what you want without worrying about sales, just like you did as a beginner.

The downside: You’ll have less time to write and, if you’re not careful, you’ll do a lot of negative self-talk about failure. The truth is that in the bad old days of traditional publishing, writers went on and off day jobs all the time, depending on contracts and income. You can survive this, with the right attitude.

The Upside is that you’ll have time to write the books you want to write.

The Downside is that you might not be able to pay your bills—and you’ll have to get that real world day job anyway.

That’s what I did, not because I had a plan, but from sheer cussed stubbornness. I was writing the work for hire to pay the bills, and writing the books I wanted to write because otherwise I would go crazy.

I’m telling you to do it as a plan, not because you stumble into it.

The upside is twofold—1) you’re writing books you want to write, and 2) the books of the heart become a carrot, making the hamster-wheel book go faster because there’s something fun at the end of it.

The downside is that you’ll be working harder than you ever did. You’re adding in other books to an already full career or you’re cutting back on those lucrative hamster-wheel books.

I’m sure there are other ways to jump off the hamster wheel and if you’re one of the writers who has done so successfully, please share your method in the comments. But these are the suggestions I’ve got.

It’s really hard to get off that wheel, and even harder to prevent the burnout, but it can be done.

You just have to plan.

My goal with these blogs is to help writers have decades-long careers, just like those mega-successful writers do. They’re still writing because they love what they do. There are a lot of other really famous writers who stopped writing in public because they couldn’t handle the pressure or because they were forced onto a hamster wheel or because they burned out.

The ones who survive love the work. They probably don’t even call what they do work. Most of them have more stories in their head than they’ll ever get to in one lifetime, and they’re on a different kind of wheel—one in which they’re fighting to tell all of their stories before they reach the end of their life.

Note above that I worried about the lack of joy that hamster-wheel writers experience. I worry about it because there’s no real reason to pursue your art—any art—if you hate what you do. There are plenty of easier, more lucrative jobs that you could hate and make a small fortune at, jobs that will give you retirement accounts and health insurance and paid time off.

Writing is something you should do out of love. It might be difficult on some days and it might be challenging. But you should always derive enjoyment from it on some level. Writing should, at its core, be fun.

So, if you’re on one of those hamster wheels, figure out how to extricate yourself. Remember what brought you to this profession in the first place. Recapture the joy.

Take the time to become one of those writers who would still be telling stories even if you no longer got paid for it (or never had gotten paid for it).

It’ll be hard to retrain yourself, but you can do it.

If you do, you’ll still be around ten, twenty, thirty years from now, publishing your work, and writing the stories of your heart.

Isn’t that why you became a writer in the first place?

This blog is reader-supported. Comments, emails and shares are welcome. So is the occasional donation. If you want to support the blog on a regular basis, please go to my Patreon page. If you want to give a one-time gift, then please use PayPal at the link below.

“Business Musings: Writers And The Hamster Wheel of Doom,” copyright © 2018 by Kristine Kathryn Rusch. Image at the top of the blog © Can Stock Photo / indomercy.

10 responses to “Business Musings: Writers And The Hamster Wheel Of Doom”