I usually spend November reading some of my favorite bestsellers. They all come out with new books during this month or during October. I read the first from one of my very favorites. Now, he’s one of the best writers we have, if not the best, and the book was great by most people’s standards. By his, it was a mediocre story (still better than I can ever do). But the book…was a huge disappointment. The hardcover (which I prefer) cost over $20. I thought I was going to get a novel. Instead, I got maybe 15,000 words. To say I’m pissed is an understatement. I’m not blaming the author since he’s traditionally published, but Good God, publishers. You’re getting worse, rather than better.

Then I picked up another favorite. I think he was riffing on William Faulkner. I’ve read Faulkner’s short stories, but not his novels. This modern book was set in the 1940s. The opening was wonderful. Faulkner is mentioned throughout and even makes a cameo. But the novel itself, from an author who is not racist, reads racist, partly because he’s writing about white folks in a racist time. And then the book itself didn’t work. It started well. Then there was the Bataan Death March (literally) for the entire middle of the book. And then an ending that didn’t work. (If this had been a short story, it might have worked.) If the author wasn’t one of my favorites, I would have quit. But I kept expecting the book to live up to its opening. It didn’t.

I read short stories after that, mostly to clear my palate, before launching into a book by another favorite. That one I’m listing below. Finally! Yay! The reading got a lot better in the middle of the month. Yay!

And then, yet another favorite who disappointed. I ended up hate-reading. This guy really can’t write women, and he’s trying to write a female protagonist. Sometimes his mistakes are teeth-gratingly bad. He makes “realizations” that if men only knew this…thoughts no real woman would ever have. (Although she might say it in angry discussion with, um, a man, or a woman who has suffered through the same thing.) Anyway, the month’s recommendations are sparse because the good stuff was thin on the field.

Here are the books, stories, and essays I can recommend from November. 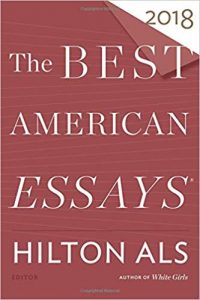 Als, Hilton, editor, The Best American Essays 2018,  Houghton Mifflin Harcourt, 2018. Fantastic volume this year. Almost every essay has something to recommend it. I loathed a few of them, particularly one in which a mother takes her kids on a trip, but that loathing shows me how powerful these essays are. I reacted to that essay, not because of how it was written, but because of its content.

A few of the others, not listed below, opened my mind to things I wouldn’t have normally considered. Primarily they were about nonfiction authors I already had an opinion about and, it turns out, my opinion was stuck in the past. Because that’s such a personal reaction, I decided not to recommend them.

Overall, this is one of the best volumes in years. If you like essays, please pick this one up.

Diamond, Jason, “Why Do Cats Love Bookstores?” Literary Hub, April 11, 2016. This article scrolled across my Twitter feed the day after Thanksgiving. I like the way some sites revive old content. I had missed this piece the first time. It’s a marvelous look at the history of cats and bookstores. It explains how the entire relationship began. I loved it. The piece is free. Check it out. 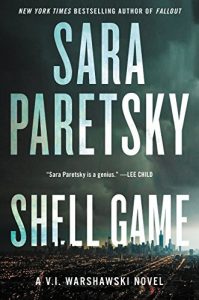 Paretsky, Sara, Shell Game, William Morrow, 2018. This is the book I mentioned in my introduction. I have read Paretsky’s books for thirty years. In fact, I realized in the middle of reading this one that my relationship with V.I. Warshawki’s dogs has lasted longer than any of my relationships with my own cats. (I realized this because one of the dogs…well, let’s just say that Paretsky isn’t above killing off a beloved character. I worried.)

Sometimes Vic (V.I.) is a bit too strident for my tastes. She is quick to anger and even quicker to judge. She gets punished for those things often in the books, but I want to take her aside and tell her to calm down a bit. (Yes, she’s that real to me.) Her strident attitudes irritated me a few years ago, but oh, is it so appropriate to our time. She didn’t irritate me as much as usual here.

It helps that she’s in her element. In a few previous books, she left Chicago to work on cases outside the city. She belongs in Chicago, and so do her hard-elbow ways of doing things. In this particular book, family relationships are key. The nephew of a friend gets accused of murder, but what he’s involved in is a lot more complex. And then there are Vic’s nieces by marriage–her first and only marriage, which ended decades ago. So, Vic deals with the ex as well, and while he’s never been a nice character, he at least seemed like the kind of guy she could have married. Not any longer, as she realizes.

Some of Vic’s actions at the end make sense from a mystery novel point of view, but the activist in me wanted a lot more. Still, I’m very happy with this book, and pleased to see Paretsky at the top of her game.

Powers, Thomas, “The Big Thing On His Mind,” The Best American Essays 2018, edited by Hilton Als, Houghton Mifflin Harcourt, 2018. Thank heavens I was reading this essay while I was struggling through that bestseller I mentioned above. Because this essay is about William Faulkner, and his racism, and whether or not he’ll be part of the canon in the decades to come. The essay is fascinating, and thought-provoking.

Sante, Luc, “Maybe The People Would Be The Times,” The Best American Essays 2018, edited by Hilton Als, Houghton Mifflin Harcourt, 2018. Luc Sante writes about a long-lost New York more often than not. This essay is no different. It’s about the music scene in New York in the 1970s, but somehow he makes the entire essay universal. I still find myself thinking about it.

Schultz, Kathryn, “Losing Streak,” The Best American Essays 2018, edited by Hilton Als, Houghton Mifflin Harcourt, 2018. Schultz started losing things a few years back. Small things like keys. Then larger things. She writes about this with an air of nervousness and discomfort that feels tangible. The essay itself is about death and loss, but from a perspective I hadn’t seen before. The entire piece really captured me.

Seabrook, John, “My Father’s Cellar,” The Best American Essays 2018, edited by Hilton Als, Houghton Mifflin Harcourt, 2018. I’ve been reading Seabrook’s articles and essays for decades. I always look forward to reading his work. This is a highly personal essay that he wrote at the request of his counselor for alcohol addiction. Apparently, Seabrook has been drinking heavily throughout his life, and only recently quit. The essay is raw and I hope presages a new future for Seabrook. Fingers crossed.

Simpson, Sherry, “Lucky You,” The Best American Essays 2018, edited by Hilton Als, Houghton Mifflin Harcourt, 2018. If you ever wanted to know how gambling addiction feels, then read this essay. It’s beautifully written. I would have thought it was a short story except that it appeared here. And because it does, it makes me feel so sorry for her husband (who is co-dependent). Sad and well done.