A New Story, A New Edition of A Book, and Best Of News

A New Story, A New Edition of A Book, and Best Of News 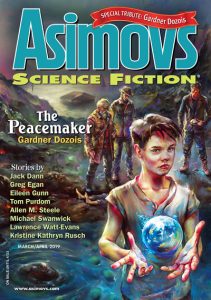 ay, I’m starting with the Best of news. I’m excited to report that my story, “Once on The Blue Moon,” will be in The Best Military & Adventure SF edited by David Afsharirad. The book will appear in the summer. David says he hasn’t finalized the table of contents yet, but he will post that when he has it. Still, he gave us permission to announce. I’m thrilled. That was the last story I wrote in Lincoln City before our big move, and I was so sick. Yet the story came out all right! Yay!

Speaking of stories, one of the first stories I wrote here in Las Vegas just appeared in Asimov’s March/April issue. The issue is a tribute to Asimov’s legendary editor Gardner Dozois, who also was a friend. (I miss him more than I can say.) Sheila Williams asked me to write a story for the issue “that Gardner would have liked.” Since I taught a lot

with Gardner, I knew he loved stories that made him feel like he traveled somewhere. So I started from there, and that became “Transport.” It’s not in any of my series. I hope you enjoy it as well. (Sure wish I could share it with Gardner.)

Finally, after many requests, WMG Publishing put together a readers’ edition of my Smokey Dalton novel, A Dangerous Road.So if you’re looking for a book for your book club, here’s one to try. Lots of book clubs keep asking if there are book club questions for the book, and now there are, thanks to WMG’s Gwenyth Gibby.

2 responses to “A New Story, A New Edition of A Book, and Best Of News”