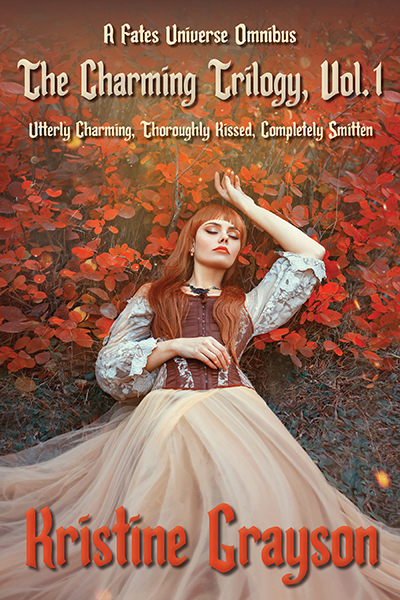 This is the second or third blog post that I’ve written on rebranding the Kristine Grayson fantasy-romance series. Because we’ve had a heck of a time marketing these books.

This new rebrand comes after I turned in the latest Grayson book in early December. It took me almost a decade to write a new Grayson book in the main part of the series. I had a very bad experience with my second traditional publisher on those books—so bad that I actually needed years to recover—and I simply couldn’t bring myself to write the book I wanted to do next.

Then I got seriously ill and slowed way down on my writing, and everything got behind. I wasn’t happy to let the Graysons go, but I couldn’t seem to find the joy that I usually brought to those books either.

Well, that joy lives here in Las Vegas, and I wrote the newest book, Hidden Charm, in record time. Happily wrote it, I might add.

That book comes out in June. I’ll let you know when Hidden Charm goes up for preorder sometime next month.

It had been years since WMG Publishing and I had tried to find the right formula for marketing the Grayson books. We let them sit, like I had let the new book sit, for a long time.

We certainly had enough other things to do.

And WMG wasn’t the first company to have trouble branding these books. Back when I first wrote Utterly Charming and Thoroughly Kissed, my editor at Kensington called me to discuss the covers. He was thinking of a cartoon cover with a fantasy element—which was hot, hot, hot that week in publishing—and I said yes.

Back then—in the year 2000—Utterly Charming was the epitome of light paranormal romance. The book won the Romantic Times Reviewers Choice Award For Best Contemporary Paranormal Romance, without a shifter or hot sex or some kind of urban or dystopian worldview.

In twenty years, paranormal romance has become something else. But the problem with the covers remained.

When Sourcebooks reissued the book in 2011, they decided (for some unfathomable reason) to go with the headless romance cover that was hot, hot, hot that week in publishing. (I have no idea why. I always thought those covers creepy.)

When indie came along, right about the same time, and we started up WMG Publishing, I had control of a number of Grayson books that had gone out of print. We tried all kinds of covers for the books, from sexy guys surrounded by cats to floaty people with Greek columns around them to really really fantasy covers that were kind of nifty.

But it’s been hard to find a way to market these books because they’re not like anything else in the marketplace. They’re light fractured fairytales that focus on romance. But, because they’re my books, they also feature some very real issues hidden in all that froth.

I had spent years off and on discussing the cover branding on these books with Allyson Longueira, the publisher and CEO of WMG Publishing. She also happens (not incidentally) to be the company’s graphic designer (because she has more awards and degrees in that area than most people in the business).

First, when we decided to reissue the books that had gone out of print, we did our best to match the Sourcebook covers. The reason was because I had several books under contract with Sourcebooks and we figured we’d piggyback off their merchandising.

That worked for a short time, but really didn’t reflect the books much. So we decided to branch out on our own. First we went with the fantasy covers, which had a bit more success, but some readers were surprised at the romance element. So we tried again. Those covers were okay for 2015, but aren’t that grand for now.

So, I promised Allyson that when I finished the next large Grayson novel in the series, she could experiment. She spent the intervening years watching the trends in romance, paranormal romance, romance with fantastic elements, and romantic fantasy.

Then I turned in the book and, oh, because I was feeling better and had a mountain of energy, I did something else that I had been planning to do for years.

I put together omnibus editions of all of my Grayson books, and I put them together by series.

You see, Sourcebooks screwed with the series order, and had me change some things about the books they reissued to make those books work with the new ones I was writing for them.

So the omnibus editions have the author-preferred versions of the books that still have headless Sourcebook covers (sigh), as well as a ton of essays, marketing materials, and some short stories that are related to the series.

I put together four omnibus Grayson editions. WMG will release them one per month between now and June.

And in addition to redoing the website (which should be finished this week) and getting these gigantic books into print, Allyson has rebranded everything. The rebranded books will appear alongside their omnibus.

The first book to appear is The Charming Trilogy Volume 1 (Volume 2 will appear in June). Then The Fates Trilogy will be rebranded in April, followed by The Daughters of Zeus Trilogy (the Interim Fates books) in May.

Allyson put a lot of time and thought into the rebranded covers. She decided that the branding concept would be fairy tale which is a well-duh to me. Well-duh as in why didn’t I think of that in the first place? Especially when reviews from the beginning called these books fractured fairy tales. Jeez. Sometimes I’m slow on the uptake.

And, I suspect, Allyson recommended fairy tale covers long before this, but there weren’t any in romance. There still aren’t, but these books are different.

She did some graphic design things that are important to readers but subtly. For example, all of the books will have the same font, but she will swap the position of the titles and author name. (Titles go on the top of the omnibus editions; author name goes on top of the standalone novels.) 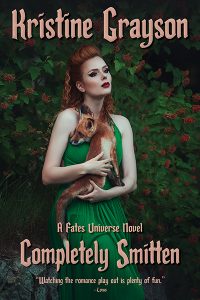 Then each series has its own art concept. The Charming series features the princesses that inspired the tale. Ariel is the inspiration for the cover of Completely Smitten. Rapunzel will be on the cover of Hidden Charm, the new book coming out in June.

The Fates books, which are a bit different (because I had to add Greek mythology to my fairy tales because…well, I’m me), will have goddess-focused art. Same font and similar design, but a lot more flow.

The art is romantic without the standard clinch. And everything looks fresh for 2019.

In past blog posts, in Discoverability, and in Creating Your Author Brand, I talk a lot about the importance of rebranding. Some publishers rebrand every five years whether the series needs it or not.

I believe in doing rebranding when the opportunity arises. The new book, along with the omnibus editions, have given us the opportunity to rebrand on the appropriate timeline.

The series of releases, timed at one new release per month until June when there will be two new releases, will help with the ebook algorithms. The releases will also allow for some marketing tricks that we couldn’t do otherwise.

WMG has a long marketing program for these books which starts this week.

The new release also enables us to boost the series, which a simple rebrand doesn’t always allow for.

For a half-second guest blogging worked, and then three days for free and…I could go on and on. The thing is, different readers see different promotions and they find a book at different times.

Brand-new readers want books that seem brand new even though the books might have been on the market for years. The books are new to the reader, so the books should reflect that newness.

Conversely, readers also love to read in a series, so they want a lot of books. Once the reader has read through those books (and likes them), then she’ll wait for the next book, years sometimes. And she’ll be tolerant of the rebrand.

But having all the books look fresh and new for the new reader encourages them to buy everything. Having only one cover (the new one) look different often discourages the reader from buying the older books, because the covers scream “out-of-date.”

I can’t do anything about the headless Sourcebook covers. I keep trying to get the rights to the books released to me, and eventually, I’ll do more than ask politely. But the author-preferred versions are out in an omnibus filled with lots of other fun material (including essays about the books’ origins), and at a cost low enough that the better deal is to buy the omnibus than the old headless books.

Hybrid writers deal with the problem of old covers all the time, by the way. And so do writers with long careers. Because there’s no way to control what cover Amazon (or Powell’s or other bookstores) display as the “real” cover. Sometimes a store that specializes in new/used will put the older book up as the main cover because the store won’t have to change the book’s web page as often.

I’m excited about the rebrand, and the marketing push on Grayson, which is just beginning. Doing work like this makes me want to write even faster so I can get to the next Grayson book.

Of course, I’m working on the third Diving book in the big series right now, so I’m casting about for something else to write. Because my writer brain does that. It likes thinking about other stories while working on the current one.

And as a writer, I’m excited about this new push for Kristine Grayson. It means she is finally getting the chance she deserves after the hell that Sourcebooks put her (me) through.

Oh, you want to know what that hell was? You’ll either have to join my Patreon page and read this post, or wait until The Charming Trilogy Volume 2 appears in June.

Because we sure are…