Busy, busy, busy March. It started with the Anthology Workshop, which took all of my hours in the day, until the workshop ended on March 6. I got back to reading for pleasure on March 7 (no time in the first few days), while juggling line editing a Fiction River, and then working on anthology projects and a really special project that started in the Anthology Workshop. For most of March, my pleasure reading time was limited to about 30 minutes per day. I did sneak in some online articles while doing my social media work, but that’s about it.

Ended up hate reading a 600-page novel by one of my favorite authors. He lost me with all of the coincidences in the middle, but his writing is so good that I had to finish the novel anyway, even though parts of it were icky (as in the temptress is an Asian-American woman, the right woman for our hero is white, only the women get tortured even though the men are evil, and this from a writer from the Deep South who considers himself liberal). The power of writing. He really didn’t let me out of the book, even though I wanted to flee. Until I got to the end, I debated whether or not I should recommend it because it is so compelling. The denouement was particularly offensive, which tipped me over into the hate-read oh-my-god-no category. It was a fascinating reading experience though. I haven’t read something that compelling and that awful in a long time.

Then, at the end of the month, during a personal crisis the last week, I blew through a book by a writer whose work I like but don’t recommend for a variety of reasons. Her characters are touchy and one of them is abusive to the heroine (which makes me worry about the writer, since he’s based on her husband). The sentence-by-sentence writing is awful. And yet I find myself lost in her stories every time I read her work. I picked up the book, read the first page, and three hours later, surfaced, annoyed at the characters, but, I realized, hitting something I needed. No, I’m not going to recommend her work. It’s too squicky. But it’s a nice reminder to me that we all have books that appeal to us but probably won’t appeal to anyone else.

Here’s what I managed to read, like, and want to recommend in March. More than I expected when the month began!

Boylan, Jennifer Finney, “What ‘Peanuts’ Taught Me About Queer Identity,” The New Yorker, February 21, 2019. Utterly fascinating personal essay about a comic strip that was central to my life as a kid. I haven’t thought of it much since I’ve become an adult, except to listen to the music from A Charlie Brown Christmas fairly regularly. This essay made me remember the parts of the strip that I had set aside because I didn’t entirely understand them. Pigpen, Marcie, and Patty. I didn’t have the vocabulary to understand Marcie’s affection for Patty, and nor did I see the defiance in Pigpen, perhaps because the kids in my school who were chronically filthy (and there were several) were either impoverished, abused or both. This essay gave me a whole different way of looking at Pigpen and made me nod in recognition about Marcie and Patty. Read this. It’s wonderful.

Hirshey, Gerri, “The Sound That Changed The World,” AARP The Magazine, December 2018/January 2019. The title of this article is not hyperbole. AARP The Magazine did a mini-issue about Motown’s 60th anniversary, and looks at the history of Motown. This article by Gerri Hirshey focuses on the way that the music, made by African-Americans, hit the charts, which were mostly white. The groups had to tour, they were on the radio, their songs are still (in many ways) the sound of our lives. Even though this is short, and it glosses over a lot of pain, it’s an important read. 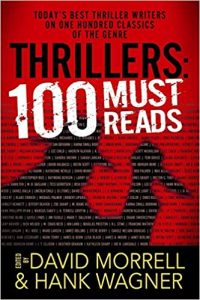 Morrell, David, and Wagner, Hank, Thrillers: 100 Must Reads, Oceanview Publishing, 2010. Initially, I was disappointed in this book. I had hoped it would be just like the mystery volume I had read a few months ago. This book is nothing like the mystery one. The mystery had long-form essays on the importance of the book. The nonfiction in this book was 500-800-words on the plot of the book, and maybe a bit about why it was important.

Once I got over the initial disappointment, I realized that those short pieces were enough to interest me. I also realized that I hadn’t read most of the early books in this volume, unlike the ones in the mystery volume. So there’s a lot here for me to catch up on.

One fascinating aspect of the book to me is that the pieces were written 10 years ago, as indie was starting and the world political situation was very different. Because thrillers deal with the current political situation, politics got discussed a lot. And the visions of the future here were…well, let us say, trumped by current events…

Worth picking up and making your way through it. I have no essays to highlight here, but taken as a whole, this book is still valuable, ten years after publication.

Nolan, Ali, “That Guy Who Always Tells You To Have A Good Race,” Runners World, Issue 1, 2019. (Yeah, looks like they’re not doing dates any more. Weird, huh?) This article caught my attention. There always is someone at the race who has a kind word for the people around him or her. It’s really nice. And this is a cool profile. Thought you might enjoy it.

Popova, Maria, “Against Self-Criticism: Adam Phillips on How Our Internal Critics Enslave Us,” Brain Pickings, May 23, 2016. Dean and I spend a lot of time teaching writers to shut off their critical voices (their internal critics) so that creativity will flow. This article explains a lot of what we try to teach. For example, there’s this lovely way that the article (and the book it’s based on) imagine the internal critic as an actual person: “…this self-critical part of ourselves, Phillips points out, is “strikingly unimaginative” — a relentless complainer whose repertoire of tirades is so redundant as to become, to any objective observer, risible and tragic at the same time.”

Read this, particularly if you’re having a problem with your internal critic. 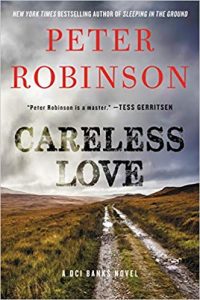 Robinson, Peter, Careless Love, William Morrow, 2019. I like Peter Robinson’s mysteries featuring DCI Banks. Banks ages in real time, so he’s not being constantly revised to become more relevant. He’s a man in his sixties now, with a lack of understanding of some modern things. (Robinson covers that by having other characters understand modern culture better.) These books are veddy British, so I learn things about British law enforcement while reading.

This one starts with a well-dressed woman found in a car abandoned after an accident. Weird thing, though. The car’s owners left the car to be picked up after the accident, and when they left it, the car was empty. So someone placed the woman’s body there.

The book has some other mysteries as well, which I’m not going to discuss, but everything was nicely twisty and held my interest, forcing me to add some minutes to my 30 minutes per day (and cut those minutes out of sleep, as good writers are wont to make us do). So if you like good police procedurals, pick up the DCI Banks novels. I don’t know if this is the best place to start, since I’ve read all of them, but give it a try. I suspect you’ll like it.

Touré, “Enter The Miracle Man: Smokey Robinson,”, AARP The Magazine, December 2018/January 2019. As more of AARP The Magazine’s look at Motown at 60, the magazine featured an interview with Smokey Robinson. There’s a lot of good stuff here about having a lifetime career, but some of the questions really caught my attention. Such as “…other cities are loaded with good musicians. What was different about Detroit, and your era?” Smokey answered “Barry Gordy gave us an outlet.” And a heck of an outlet it was.

More than that, though, some of the way that Smokey Robinson thinks about himself, at least as he expresses here, might be a key to his longevity. Such as his answer to “When did you first think ‘I’m a good singer’?” He never did, and still doesn’t. He’s not “an ego singer.”

And there’s a lot more here. Worth the read.

Touré, “The Hidden Figures of Hitsville,” AARP The Magazine, December 2018/January 2019. The subheading of this is “You’ve probably never heard of The Andantes…” and it was true. I hadn’t. And I thought I knew a lot about music history. The Andantes sang back-up on more than 20,000 Motown sounds and were literally abandoned when Motown moved to LA. A sad story, and one that’s not uncommon for artists. Broke my heart to read it, though, and it might break yours just a little as well.