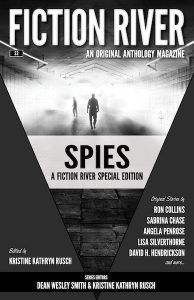 Workshops and visitors, plus a business emergency, marked April. I did a lot of manuscript reading, and even more reading for a course that I’m taking. You’ll see some of the manuscripts that I worked on in a special project we’re putting together in December. I’m enjoying the heck out of that.

Some of the reading that I did earlier in the year you’ll find in the latest Fiction River Special Edition. I had so much fun working on Spies. The stories are fascinating and good. I’m really proud of this anthology, which you can get here.

Here are some of the other wonderful things I read in April. 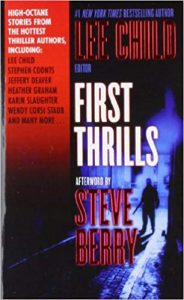 Child, Lee, editor,  First Thrills, Forge, 2011. Somehow I missed this short story anthology when it came out. I found it a few months ago, and read it after the mystery workshop. Only one story really rose to the recommendation level, but until a stretch of stories toward the end, everything else was enjoyable if a bit predictable. Some of the stories by the once-newbies included here were on rails and a couple were just disgusting, which isn’t my kind of fiction. But the rest were worth the time I spent on the anthology. Based mostly on the first three quarters, this book is worth your time as well.

Child, Lee, “Safe Enough,” Death Do Us Part: New Stories About Love, Lust, And Murder, edited by Harlan Coben, Back Bay Books, 2006. I’m reading old short story anthologies (clearly), catching up on stories I’ve missed. I read the opening of this short story out loud to Dean, just for the voice and the attitude. At first I thought he missed a detail (I went back and looked), but he didn’t. Great writer that he is, he put that detail in four words, not even a full sentence.

The story is about a man who grew up in New York City, but gets a job outside of the city, and sees a woman who intrigues him. The story goes from there, in a way that I hadn’t quite expected. I had sworn off the Jack Reacher books a few years ago. (Surviving a nuclear blast just ruined him for me, although I did stick it out a few more books.) But this short story makes me wonder if I shouldn’t try again. I do love Child’s writing and characterization. So maybe I’ll crawl my way back… 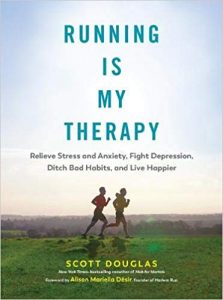 Douglas, Scott, Running Is My Therapy: Relieve Stress and Anxiety, Fight Depression, Ditch Bad Habits, and Live Happier, The Experiment, 2018. This lovely little book isn’t just for runners. I think anyone who suffers from depression or anxiety would benefit from reading this. I don’t think it would nag you to run or even to exercise, although that’s highly valuable. What Douglas does is examine the current state of research on both depression and anxiety, and explore all the various avenues toward mitigation those chronic problems. He writes about everything from Cognitive Behavioral Therapy to antidepressants, as well as various coping mechanisms besides exercise.

Douglas deals with all of that, plus he discusses goals and choosing how to live from day to day. This is a really valuable little book. If you suffer from depression or anxiety, I hope you pick the book up, whether or not you run.

McKenzie, Grant,“Underbelly,”, First Thrills edited by Lee Child, Forge, 2011. This story starts with a guy unzipping himself from the inside of a piece of luggage, so that he can rob the luggage compartment under a bus. He discovers another thief in the same compartment, a thief he knows, and the story gets weirder and more fun from there. Impossible to put down, and so wildly imaginative that I shook my head as I read each word, “Underbelly” was the highlight of the entire anthology.