The month started with the Licensing Expo. 12 hour days, with no time to relax. I didn’t get much time to read then, but the rest of the month eased. Lots of good reading, more than I thought I could cover here, which is why this is a bit late. I’m also still cogitating about whether or not to post a novel I read through the end of June, but finished on July 1. The first half was great, but the second half…. What I finally decided to do was decide in July, since I technically finished in July. 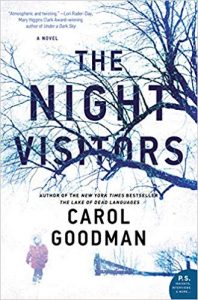 Goodman, Carol, The Night Visitors, William Morrow, 2019. When Carol Goodman wrote gothics, I loved her work. Then she moved to thrillers of a particular child-in-jeopardy kind and I couldn’t read them. One of my friends continued to read her work, and would let me know which to avoid, which to really avoid, and…this past month, which to read. Which was The Night Visitors. My friend said that there was a child in jeopardy, but she never feared for his health and that there was a dead kid, but that happened a long time ago in the story time.

True, and kinda true. The dead kid, particularly when we figured out what happened, nearly made me put the book down, but I was already committed, so I stayed. I loved the characters and devoured the book quickly. It isn’t really a thriller, per se. It still has a lot of gothic elements, with actual ghosts, and a few hard-to-believe moments. But the characters and the situation, and particularly a character named Mattie, make up for the hard-to-believe stuff. I want to go back and read some of the other thrillers, but I won’t because her characterization is too good, and I could barely tolerate this one. So if the others were more difficult on the child endangerment side, then they’re not for me. I did enjoy this, though, enough to share it here. 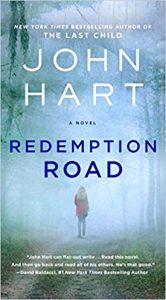 Hart, John, Redemption Road, St. Martins Mass Market, 2019. Compelling novel. I had figured out who our serial killer was about 1/3 of the way through, because Hart is so good with language. When he chose to be in the killer’s POV, I recognized the character immediately. But I didn’t care, and I didn’t care that nothing ended up being plausible.

The writing is spectacular, the characters are strong, the situations tense. I worried about everything as I read, so I couldn’t put the book down, even as the dead women kept piling up (for no reason) and our female protagonist needed to be rescued over and over again. (Sigh.) I put my agenda aside and read the book as written. It’s strong, suspenseful, and hopeful. Well named. If you like bloody mysteries, here’s one. 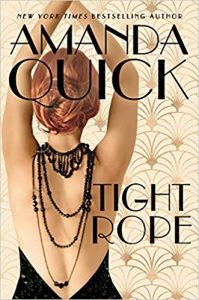 Quick, Amanda, Tight Rope, Berkeley, 2019. Almost didn’t buy this one, because it sounded like it was about the circus. Naw. It’s about a retired trapeze artist in Quick’s setting of Burning Cove. The artist, who was nearly murdered, opens a bed and breakfast in the very house where a previous character died. Yeah, it gets complex, but Quick pulls it all off. Lots of old Hollywood lore, lots of big old cars, lots of hugger-mugger stuff, and a nice romance. I could easily see this as a film from the 1940s. Lots of fun, and no real circus to be found. 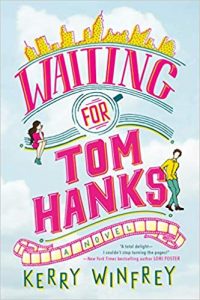 Winfrey, Kerry, Waiting For Tom Hanks, Berkley, 2019. First, a warning, this book has almost no setting or description. Since I read for setting and description, the fact that this book has almost none is a recommendation on the quality of Winfrey’s voice. It’s spectacular and covers a multitude of descriptive sins. Waiting For Tom Hanks is probably the first novel I’ve read in years that made me want to edit books. I wanted to show Winfrey how to layer in setting in the proper place (not after we need it), and take this book from good to great.

But I didn’t edit it, and the book got published, and it’s good. Laugh-out-loud funny, with wonderful characters and a charming set up. Annie Cassidy, who makes her living writing clickbait (like Five Best Ways To Unclog A Toilet) dreams of working on movies and meeting the perfect man who is Tom Hanks of Nora Ephron’s rom-coms. The book is beautifully meta, and works on a bunch of levels. It actually reads like it was a screenplay first (which wouldn’t surprise me) since screenplays never describe the setting (unless needed) or what characters look like.

Ignore that. Read this on a night when you need a laugh. You’ll be happy you did.