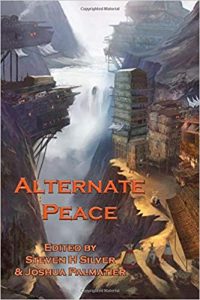 Now, here’s something fun. Alternate history stories about changes in history that occurred not because someone lost a war or won a battle, but because of something non-violent. No assassinations failing, no bombings unsolved. No. Instead, someone won an election who shouldn’t have…or, in my case, got impeached as he should have.

Yes, I’m talking to you, Andrew Johnson, evil architect of our post Civil War world. The changes he blocked would have altered the U.S. in amazing ways.

I came up with that idea the day Steven Silver and Joshua Palmatier asked me into Alternate Peace. I thought easy-peasy. Um, no. I had no idea the changes that Johnson blocked. I studied that period and I had no idea. Trying to wrap my arms around that story was an effort, but a fun effort.

There are lots of fun efforts here. Lots of excellent writers too, including Rick Wilber, Juliet E. McKenna, and Ian R. MacLeod. If you want an anthology that makes you think and entertains you, pick this one up now!