Sorcery, Steam, and The Angel of Death

Sorcery, Steam, and The Angel of Death

I feel like I’ve been assisting you with your summer reading this year. A previous space bundle, a bunch of cool anthologies, a new Kristine Grayson novel, and a new Kristine Grayson-edited Fiction River. I’d say what more could you ask for, but seriously, if you’re a voracious reader like me, you could ask for a lot more. (And maybe get it too!)

So…with you voracious readers in mind, here’s another Storybundle. This one is called Sorcery and Steam. It has a lot of fantasy and some steampunk, just enough to keep it…ahem…steamy.

What’s super cool about this bundle (and I do mean cool) is that it has four exclusive books, books you can’t get elsewhere—at least right now. 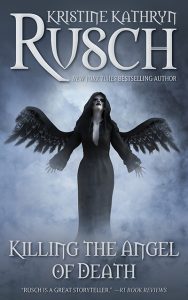 I wrote Killing The Angel of Death for me, because I was in that stage of grief where you (and by you, I mean we. Or maybe me) just get mad. I mean seriously mad. And I couldn’t get the phrase “killing the angel of death” out of my head. So I wrote it down.

It’s a fantasy story or maybe a revenge story or maybe a fantasy-revenge story about a group of people who want to kill the angel of death and have actually developed a plan for it. And here’s the cover, as a standalone. If you want to read this before anyone else, pick up the Storybundle. The book itself won’t be out for at least a month.

And that’s not the only exclusive in this Storybundle. Dean has a collection of Poker Boy stories about Lady Luck, titled Luck Be Ladies. (I confess: I helped with the title. We’d just seen “Luck Be A Lady” performed on stage, and…well, you see.) I love Poker Boy and want Dean to write more of them. So the best way to get him to do so is to pick up the existing collections. You’ll like this one. I promise.

Annie Reed also put an original collection in this Storybundle. I love Annie’s work and buy it often for Fiction River. This collection is brand-new, and filled with urban fantasy. It’s worth the price of the bundle alone.

The final exclusive comes from WMG Publishing. Associate Publisher Gwyneth Gibby put together her favorite sorcery and steampunk stories from our first few years of Fiction River, into a Fiction River Presents: Sorcery and Steam. (You’re probably seeing a theme here.) The anthology includes an Annie Reed story (as well as one of mine). It also has perhaps my favorite Lee Allred story, a creepy almost Lovecraftian thing set on the Oregon Coast. And if you like adventure fiction of the steampunk variety as much as I do, check out Anthea Sharp’s “The Airship Adventures of Captain Jane Fury.”

Remember, you can’t get these four books anywhere else.

They’re in the bonus category of the Storybundle, which means that for those four books, as well as a stunning dragon tale from Stefon Mears and a hard-to-find short novel, From Whence You Came from Laura Anne Gilman set in her Vinearts series (which mixes magic and winemakers.) You have to spend $15 to get those and the so-called regular books in the bundle. If you don’t feel like spending $15, though, you can spend $5 and get four excellent books.

Those books also include an anthology Guilds & Glaives,  edited by S.C. Butler and Joshua Palmatier, as well as more dragons, this time in Louisa Swann’s Night of the Clockwork Dragon. And clockwork—y’know, steampunk stuff—continues with Leah Cutter’s The Clockwork Fairy Kingdom. And then, of course, there’s Nicole Givens Kurtz’s weird western, Sisters of the Wild Sage, which I cannot wait to read—so it goes on my summer reading pile too. (My virtual pile, since these are all ebooks.)

If you’re feeling generous, and I hope you are, you also have the opportunity to donate some of the price you paid to AbleGamers, which helps disabled gamers get equipment so they can participate in online worlds, which are often the only social interaction some get. So give the gift of entertainment this summer, by donating.

Here’s the thing about Storybundles, though. They vanish as if they’ve never been. So if you want to get these books and read your way through the rest of the summer for $15, then you’ll need to buy this before August 15. I’ll try to remind you, but I have to warn you: My summer has vanished rapidly. (I still think it’s June.) So I might miss. Rather than risk losing the chance, head on over now, and get your bundle—and maybe pick up a bundle for a friend. (Yes, you can give these away.)

I can’t provide the hammock or the sun tea, but I can provide the most important part—the entertainment. So enjoy!