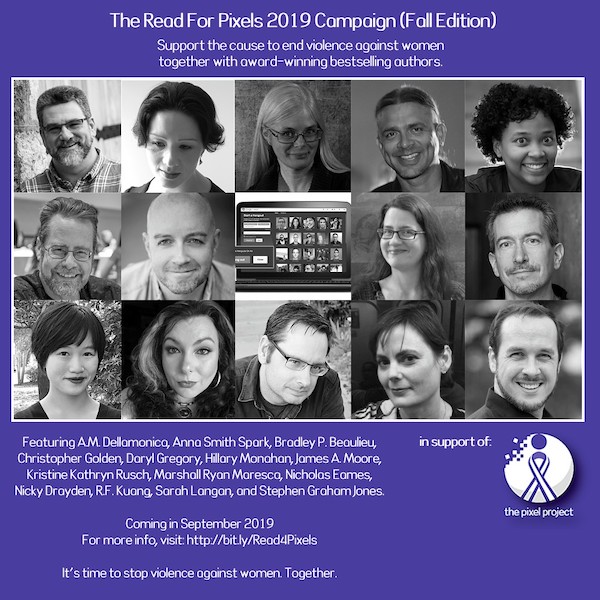 As I mentioned a few weeks ago, I’m participating in a lot of charitable events this year. The news has turned darker than usual, and I feel the best way to combat such darkness is to be actively involved in causes I believe in.

One of those causes, which I’ve been active in since college, is the fight against violence against women. Those of you who’ve read my work know that violence against women and the repercussions of it have been a theme of mine for decades now. What many of you don’t know is that I’ve worked at suicide hotlines, rape crisis centers, and helped support women’s shelters since the 1980s.

As I got older and had less time, I’ve donated a lot of money to these causes, but have been unable to donate as much time. So I was happy when The Pixel Project contacted me. They do annual events to fundraise for their fight against violence against women.

This year, I join A.M. Dellamonica, Anna Smith Spark, Bradley P. Beaulieu, Daryl Gregory, James A. Moore,  Marshall Ryan Maresca, Nicholas Eames, Nicky Drayden, R.F. Kuang, and Stephen Graham Jones and others in the September fundraiser. We’ll be reading from our work, discussing the issues, and participating in a live Q&A. We’ve all donated books or other goodies for the fundraiser, as have Adrian Tchaikovsky (with Macmillan Books UK), Alison Goodman, Alma Alexander, Charles de Lint, David D. Levine, Jen Williams, Juliet E. McKenna, Laura Anne Gilman, Leanna Renee Hieber, Richard K. Morgan, and Tananarive Due. So you’ll be able to get a lot of fun stuff, learn a few things, hear authors read, and donate to a good cause.

The Read For Pixels event starts tomorrow, so please check it out. My event will happen on September 13, and I hope to see you there!