Hectic month. I’m beginning to think they’re all hectic these days. Ah, well. I’m getting some reading done, but not as much as I want. And some books read slower than others.

In fact, one of the books I read took almost five days to finish. It’s in a side series that I like. The main series is something I don’t much like. This book has one of the main series characters cross into the side series. And I realized that the soap opera aspects of the main series infected the mystery aspects of the side series. This particular book meandered and had no real plot. Still, I liked the characters enough to finish, but I felt no urgency to finish. That sucked up a lot of my reading time. And no, I’m not recommending this one, even though it was really well written.

Reading Robert Crais spoiled me for the last week of the month. Nothing else was measuring up. I read a lot of short fiction, but most of it I would have edited. And I did try one bestseller, who had a novella in a mystery anthology. I’ve tried reading his work since he debuted in 1997. I cannot envision anything he writes. It’s as if his version of English and mine are two different languages. So I’ve given up…until the next time I come across one of his short stories.

So I didn’t read as much as I wanted to, and what I did read passed the time, but didn’t inspire. Except the pieces listed below. Please remember that I use Amazon links because I’m lazy, not for any political reason.

Berger, Shoshona, and Miller, BJ, “Why You Need To Make a ‘When I Die’ File—Before It’s Too Late,” Time Magazine, August 1, 2019. I’ve written quite a bit about getting your affairs in order for your estate, but I haven’t seen an article about it as clear as this one. It’s worth reading and not just because it’s well written. It’s also good advice. 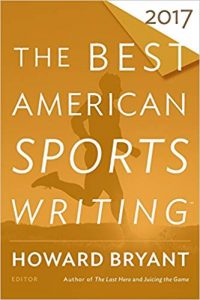 Branch, John, “Why Steve Kerr Sees Live Beyond The Court,” The Best American Sports Writing 2017, edited by Howard Bryant, Harcourt, 2018. For decades now, I thought little more about Steve Kerr than he was a talented basketball player who, if I had to guess, was a California-type surfer dude, because that was what he looked like. I’m not sure I gave it that much thought. I followed him as a player because I followed his team, and I had no idea that after he retired from play, he became a coach for the Golden State Warriors.

I also had no idea his father was killed in the bombing of Beirut in 1983. His father, who was president of American University in Beirut, at the time of the massive bombing. Kerr grew up in the Middle East, not in California, and so had depth, just from that history, that I had no idea about.

The history, the depth hooked me. The article held me. Fascinating how people’s histories have an impact on who they become.

Bryant, Howard, The Best American Sports Writing 2017, Harcourt, 2018. I read the 2018 volume earlier this year, and really liked almost everything in it. While I enjoyed much of what I read here, the individual pieces weren’t as standout as the 2018 volume. That said, everything in here was readable, and some of it might be inspiration for some fiction. So I’m recommending the book. 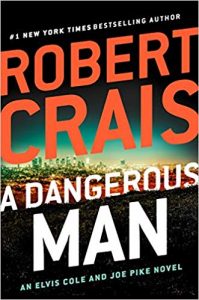 Crais, Robert, A Dangerous Man, Putname, 2019. Robert Crais could write a novel every week, and I’d buy it. I love the voices he uses, the way he writes, his perspective, and the easy suspense of the novels. I suppose I should be happy that he writes one book every 18 months or so. The moment the books show up, I read them. It was no different with A Dangerous Man. The opening chapter is deceptively calm—a family going to bed—until a chilling detail appears in the final two paragraphs. Just a detail. If you scan, you miss it.

That’s the thing about Crais novels. If you scan, you miss a lot. Even though the prose seems simple, it’s not. It’s quite complex and filled with important details. This novel has twists and turns and one poor character survives only because of luck. But that’s all it takes.

The novel isn’t one of Crais’s best—I still think Suspect is up there—but this is an excellent entry in the Pike/Cole story. It’s also a good place to start, if you’ve never read any of Bob’s work. 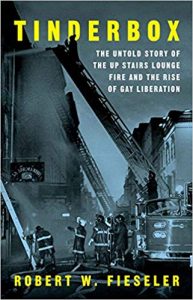 Fieseler, Robert W., Tinderbox: The Untold Story of the Up Stairs Lounge Fire And The Rise of Gay Liberation, Liverwright Publishing, 2018. Several media outlets named this the best book of the year, and it won the Edgar. I had ordered it on the best-of recommendations, plus it’s in my favorite time period to write about, so I figured why not. When it won the Edgar, I put it on top of my TBR. I’m so glad I did.

The book is well written (although you really shouldn’t read the fire segments while eating). The Up Stairs Lounge, like the Stonewall, was a bar for gays, when being gay was illegal. The authorities overlooked it, if the bar didn’t cause trouble or draw attention to itself. But they also ignored other things, like fire codes and such as well. In an arson-set fire in June of 1973, 32 people died in less than four minutes. A few of those bodies are still unidentified, because no one wanted to say they were going to a gay bar in 1973. The people those bodies belonged to are probably still listed somewhere as missing persons.

Sad, triumphant, fascinating, this book deserves all of its accolades.

Thompson, Wright,“The Secret History of Tiger Woods,” The Best American Sports Writing 2017, edited by Howard Bryant, Harcourt, 2018. I found myself mulling this over after I read it, because the piece looks at Woods competely differently than the media usually looks at Woods. I especially thought about it, since Woods won a tournament this past year, which becomes an incredible feat if the descriptions of his back in his piece are any indication. (He had to use his phone to call his daughter to help him stand after falling in his backyard.) Fascinating stuff, and well written too.