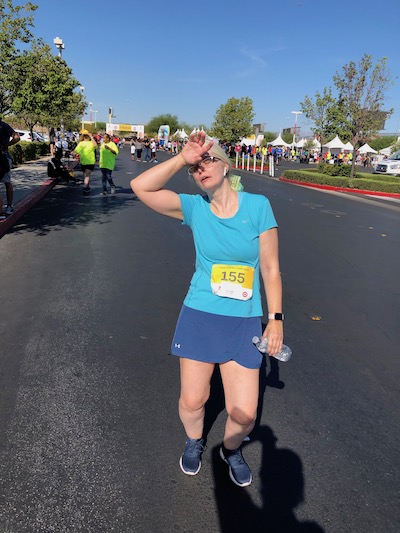 I promised you photographs from the St Jude Walk/Run here in Las Vegas. The photo above is of me goofing off afterwards. As I feared, it was really too hot to run safely—for me at least. I ran the first mile or so, then walked. It was about 84 at that point, and hotter in the sun, since we were on concrete (which can add 5-10 degrees Fahrenheit or more to the “feels-like” temp). I tossed water all over myself at the first water stop, then kept going. I ended up talking to a fascinating woman for the next mile. We got caught up in our conversation—and suddenly found ourselves at the finish. Which was too short, since we had just gone past Mile 2. 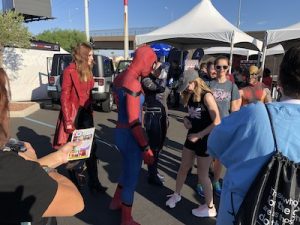 I asked some volunteers about where we had gone wrong, but they had no clue. Dean later explained to me that we were to go through the finish line and take a shorter loop, but he only knew that because he followed some other runners. The announcement got lost in the noise and bad sound system. I looked at the race map this morning, and didn’t see anything about a second loop. But I did see a lot of comments about the 5K being too short, so I wasn’t the only one.

Even with the weird course and the heat, the run was a lot of fun. Superheros, great people, lots of good conversation—and we were done by 10! It was a good way to start the running season. The next run is at the end of the month, and will probably be a bit too hot as well. (Only not as hot as this one.) 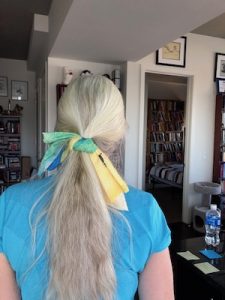 The reason I’m tell you all this here, and not on Facebook where I usually do, is because so many of you helped with the fundraiser. I didn’t make the top ten individual fundraisers, but I came close! (Actually, I appeared in the top ten for about a week.) You can still donate for the next week or so if you want. 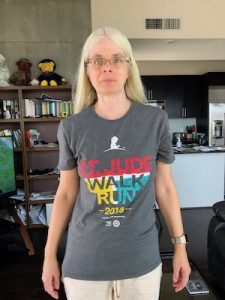 St. Jude’s is a great charity. They offer free health care for critically ill children and usually give parents/family a free place to stay while the kids are getting treatment. (Unfortunately, in the US, the poorest among us usually can’t afford any health care at all, and that includes kids.) St Jude’s is also a research pioneer, doing a lot to help stop childhood cancers. So your money will go far. 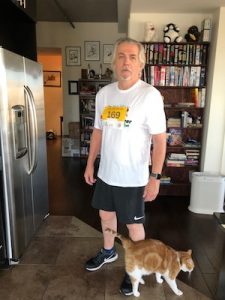 Because of the donations you all made, St Jude’s has an extra $915 so far. They sent me this little doodad for my hair to celebrate the fundraising, and I qualified for the race shirt. Here’s me modeling both. 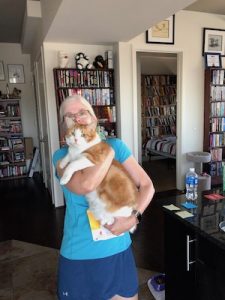 And finally, what race photos would be complete without pictures of a cat who did not run the race but who slept through it? Yes, Gavin is that big. Yes, he’s slightly overweight. But only slightly. He’s part Siamese and tall, as you can see from the photo with Dean.

Thank you all again for your support on this. I can’t tell you how much I appreciate it.

2 responses to “The Run…Walk…Charity Event”